The FT thinks that Spain's President Rajoy is playing for time in his struggle with the ECB over Spain's need for the bailout he always told us - Zapatero like - that we wouldn't need. We in Pontevedra knew his real priority was to attend last night's first-of-four bullfights in the city. He didn't appear, though, in the first-of-four post-corrida bacchanals down in the old quarter, where hundreds of 12 to 40 year olds get as drunk as lords. And drench themselves with wine in the process. In the UK it'd be a pretty terrifying scene but here it's so innocuous we could walk through the throng with impunity. Bothered only by the young man who - with charm - suggested I swap my (expensive) Panama hat for his (cheap) imitation.

Today, Ian and I managed to get to two major fiestas up the coast. The first was at Catoira, where a tenth century Viking encroachment is celebrated as only the Spanish can - with noise, colour, a sense of fun and a total disregard for Health&Safety. The latter culminating in a couple of the fire-jugglers thrusting their brands into the faces of young kids in the crowd. Neither Ian nor I were terribly surprised to see an ambulance coming past us as we made our way back to the car. 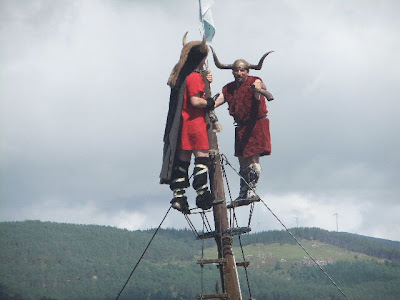 The first Vikings we could see above the crowd. 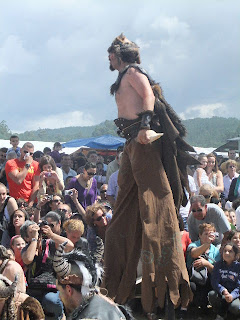 You may be as unaware as we were that some of the Vikings arrived on stilts. 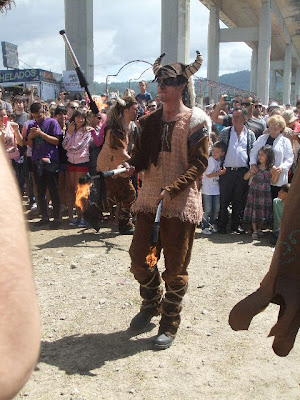 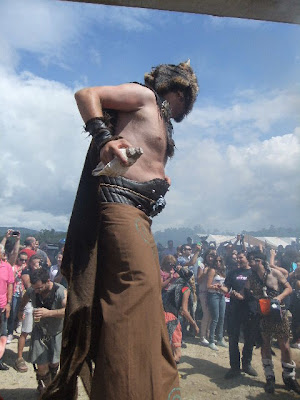 Conch-blowing was another Viking talent unknown to me. 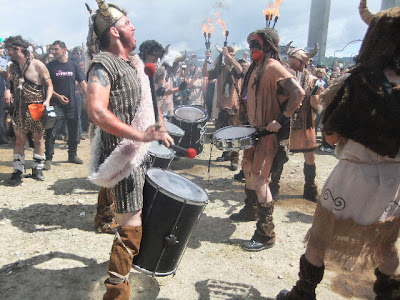 The noise. Or some of it, at least. 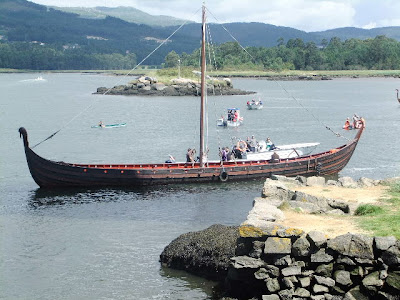 One of the two Viking craft. Equipped with an engine built in 1034. 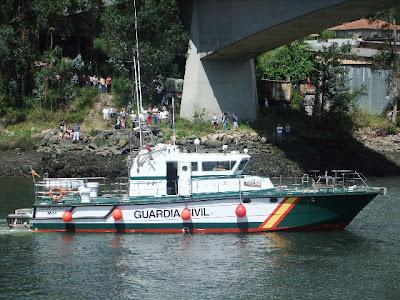 The Guardia Civil, who appear to have taken the invasion with some seriousness. 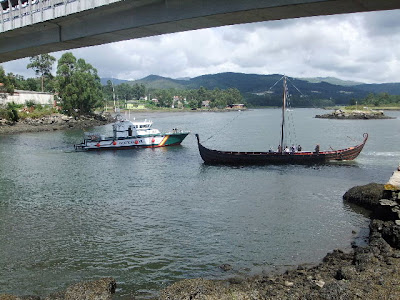 Getting ready to board. 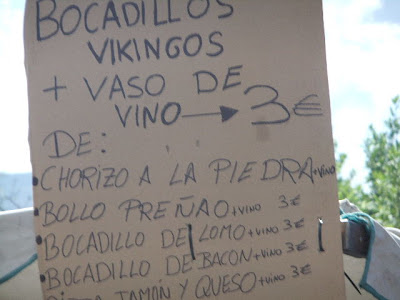 Finally . . . Sandwiches for the visitors. Plus a free glass of wine.

The second fiesta we got to was the annual Festival of Albariño wine in Cambados, further down the coast. Basically, this is two parallel lines of kiosks, offering glasses and boxes of wine from the various bodegas of the O Salnés area, north of Pontevedra. Colour, noise and pretty women were the usual mix and, for no good reason, we chose the kiosk of Gran Vinum at which to sample the produce. Predictably, we then asked for the prices of the boxes of 2 and 3 bottles. Confusingly, these were 15 and 24 euros. So, instead of 3 bottles at 8 each, we bought 4 bottles (2 x 2) at 7.50 each. We later realised that this wasn't stupidity but brilliant marketing on their part. They'd sold them at only 7.50 each but we'd bought 4 instead of the 3 we'd planned to. We'll have to drink the surplus one this evening, to drown our sorrows.

And here's the young lady we bought them from, sportingly sporting the Panama hat so desired by the young man down in the old quarter last night. 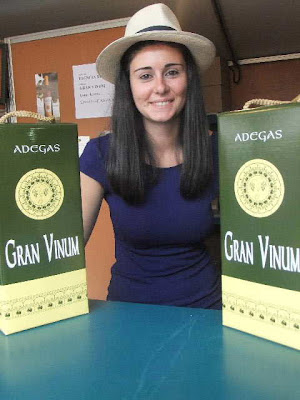 I didn't know the Vikings spoke Spanish lol! And that first pic is hilarious. Do you have any ancestors who were Vikings?

@Azra. Yes, I believe so. Recent genetic research shows that most of the people down the west coast have viking blood. Especially in the Wirral peninsula, where there are still many signs of invasion and settlement Words and place names galore.