Spain and the Brexit: Here's one of my favourite writers, Englishman(?) John Carlin, writing in El País, under the headline: The New British Dictatorship. He's clearly not a fan of the UK's likely exit from the EU and sees recent British developments as an example of how not to run a government. But I still like him. After all, some of my best friends are theists.

The Spanish Civil War: The Daily Telegraph reports here on a tour of the most moving sites associated with this. And The Local has provided this useful list of relevant reading matter on this key development in Spain, which began 80 years ago this week.

Amazon Spain: Another fight in prospect . . .  They did give me back the money they charged me for a 'free' e-book but now I see they've charged me twice for the last book I ordered from them. Efficient they certainly aren't.

Telecoms Tricks: Over in the UK, something has happened which is impossible to imagine taking place in respect of Telefónica/Movistar here in Spain . . . . A government report has accused BT of “significantly under investing” in the nation’s broadband network and called for the company to be broken up if it doesn’t rapidly improve its performance. MPs pulled no punches in accusing BT of “exploiting” its position as both the owner of Openreach, the networking division that controls the country’s largest broadband network, and the largest internet service provider. One day, perhaps.

The London Housing Property Bubble: This is set to collapse, apparently. Not before time, of course.

Driving in and Around Pontevedra: This is only permitted at 30kph, or 18mph. As with people going up and down the hill to/from my house, I'd be astonished if anyone did this, other than in a jam. Or over the numerous speed bumps. So the police are missing out on a huge revenue oppportunity. Not like them.

Pontevedra Nuisances: As I've mentioned, this year has seen an explosion in foreign tourists, as well as beggars, dogs, beggars-with-dogs, and  . . . . jewellers. Here's one of most well-known and professional pan-handlers: An ex drug-addict (I'm told) who appears to have made friends with several of the city's women-who-lunch and is now so well dressed that she rivals Queen Letizia in the fashion stakes. 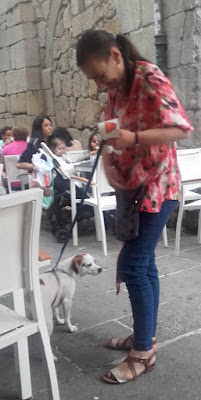 Finally . . .  A nice comment  from Matt on the Russian drug scandal:- 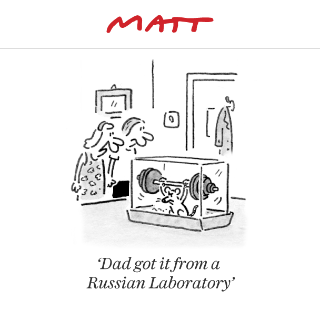