A year or more or so ago, I scoffed at the practice of the local TV station of putting adverts on the screen during football matches. They started with brief banner ads along the bottom of the screen when the ball went dead but then moved on to showing half-screen ads even during play. Well, there’s no stopping a truly bad but profitable idea, especially in a country where it is a common marketing tactic to see how far you can go in displaying contempt for your customers before they scream. And so one of the main TV channels last night gave us the World Cup game replete with not just ads but also endless trailers for their next programme. As with the local station, we were blessed with ads even when the ball was in play. But the technique which allowed this was almost impressive. Traditionally, it’s been a problem during games here that the score was not shown in the corner during the game but - God knows why - only came up on the screen every 15 minutes exactly. But last night we were given it every few minutes - but with an ad attached every time. As if this wasn’t enough, box ads were appended to a host of statistics which flashed up on the screen with monotonous regularity. Some of these [e.g. ‘Shots on Goal’] were reasonably relevant but other [‘Kicks into the penalty area’] were clearly specious and merely shown as a hook on which to hang an infuriating ad. Indeed, by the end of the game I was expecting to be advised how many blades of grass had been trodden on by the respective teams. If not by each and every bloody player in turn. It’s at times like this that you realise just how weak consumer movements are in Spain and how much something like an Ombudsman is needed.

And so on to this morning’s viewing. With my satellite decoder out of commission, I forced myself to watch one of the morning’s gossip programmes while I ate my cereal. The format here is that 5 or 6 females and gay males sit in a semi-circle [with the audience behind them!] and discuss the love life of one celebrity or another. Of course, in Spain ‘discuss’ means talk or shout simultaneously. The celebrities range from the richest [and ugliest] woman in Spain to the latest squeeze of one of the famous bullfighters. This morning’s victims were one such bullfighter and his current wife, who may or may not be having difficulties. And the hot topic was the fact that he’d chosen to spend some of a recent night in the van in which his travelling team sleep. The highlight of the programme was a sequence shown above the following caption – ‘The first televised pictures of Francisco Rivera taking a pee’. This was repeated 3 times before I’d finished my cereal and switched off.

The word used by the serious press here to describe this sort of TV is ‘telebasura’, or ‘tellyrubbish’. Unfortunately, there’s very little else on offer. But, if this is the price the country pays to keep out a Murdoch-type tabloid press, then it is surely worth paying. No one is forced to watch it and the high quality press remains safe from the tabloidisation which has destroyed the great UK newspapers.

On a lighter note, I went out to one of Galicia’s beautiful off-coast islands today. And came across the famous hiding sheep of Ons ….. 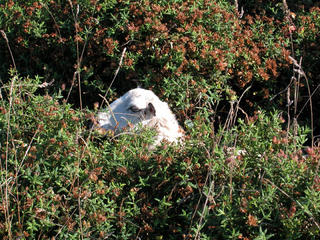 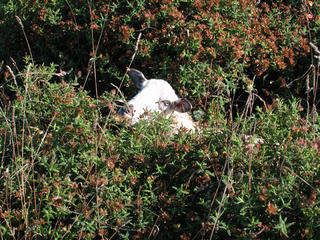