The Spanish government has demanded the immediate release of the two Galician fishing boats impounded by the Norwegians. They insist only the Spanish courts have jurisdiction over the alleged offences and that, if the they’re found guilty, there will be severe fines. Which is doubtless true but, old sceptic as I am, I wouldn’t bet much on this coming to pass.

One of the problems – admittedly not a big one – of living in a society where people are amiable and love to talk is that conversations can go on for rather longer than you’d want. I asked the head waiter in my regular café this morning about the implications of the imminent anti-smoking law. Twenty minutes later – and with him giving his considered view for at least the third time – I was more than keen for him to turn his attentions to another customer. If he'd gone on much longer, I'd have taken up smoking.

As I’ve said, the issue of the British EU rebate is never presented on the Continent in its full light and the picture invariably painted is that of the EU financing Britain, rather than the other way round. That said, truth is of little value when all your 24 colleagues are against you and not averse to whipping up their electorates with partial and self-serving propaganda. So it will be very interesting to see if Mr Blair can get himself out of the corner into which Mrs Thatcher and Mr Brown have painted him.

And talking of the EU, evidence has now emerged that the initial view taken by the Commission of the proposed utilities takeover in Spain was that it had international ramifications and couldn’t be left to the Spanish government to adjudicate. So maybe Mr Zapatero did do a deal with the President of the Commission when he came to Spain last week to ‘take his son to see the Real Madrid-Barcelona game’.

For anyone wondering what happened to the illegal artificial hill with the JCB perched on top of it – here’s the current state of play. As you can see, the problem of preventing the houses from falling off the cliff has now been tackled rather more seriously…. 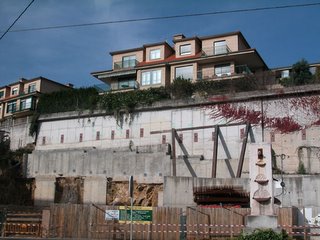 For new readers – If you’ve arrived here because of an interest in Galicia or Pontevedra, you might find my non-commercial guides interesting – at colindavies.net
at November 22, 2005