It was the last day of the 'Aromas of Andalucia’ exhibition down in Pontevedra’s main square today, so I made a second visit. This time there was no Visitor’s Book for comments. I guess the organisers got tired of reading variations on ‘Looks nice but smells awful’ from the notoriously conservative Galicians. To be honest, there are few [if any] traces of Muslim influence in Galicia and it’s hard to blame the locals for treating other – very different - parts of Spain like foreign countries. Truth to tell, this is exactly how they are referred to in the local press – as in “Foreign banks have large share of the Galicia market”, meaning those from Madrid, Barcelona and Bilbao.

Well, exactly 4 weeks after applying for it, I finally have broadband. But only via the ‘principal phone socket’, which just happens to be in the garage at the front of my house. So, perfectly placed for the horrendous noise – and dust – involved in the replacement of the nearby granite escarpment by a wall made of – would you believe? – granite. I don’t yet have the free calls that come with broadband as the phones won’t work from the master socket. I’m waiting for Telefonica to come and fix things but, as they’re clearly miffed that I’m not taking broadband from them, this is likely to take some time. The tone of the employee I spoke to yesterday was one of outrage that I’d exercised my right to elect a competitor instead of them. BT of circa 1995 re-visited.

My sincere thanks to the reader who supplied proof that the belief about all women born under Franco [as it were] having to be called Maria was an urban legend. I do appreciate it when people take the trouble to write constructively.

All of which reminds me that someone has written a book ‘proving’ that Christopher Columbus was born just outside Pontevedra. The last I read on this subject was that the relevant papers had been shown to be forgeries but why should the facts be allowed to get in the way of a good story.

Finally, a couple of pix of the massive granite blocks being used in the Galician version of a Derbyshire dry stone wall outside my house. They make a lot of noise when dropped by a crane. . . 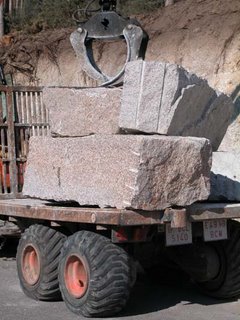 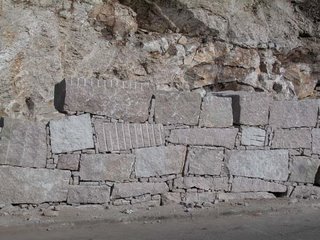