My daughter in Madrid held a small dinner party on Saturday night and we got to thinking why this pleasant institution is not a feature of Spanish life. We wondered whether it was because it involved at least one person doing a lot of work. Or whether it conflicted with the Spanish need to move from place to place when they’re enjoying themselves. But we ultimately decided it was because it’s hard for young people to entertain friends at home when they live with their parents until they get married and move out. And so the habit never develops.

My daughter introduced me to a cyber café where you buy a 5 euro card and then replenish it when this runs out. My first pleasant surprise was being told I had over 6 euros of credit. My second was being advised, after an hour of use, that I still had 5.93. The next time I used the card, this had risen to 6.50. And it was only fractionally less after another hour. For a small fee, I’m prepared to tell Madrid residents where this charitable organisation is located.

Perhaps because local elections are coming up, the opposition party is making a big thing about the on/off, legal/illegal construction of the granite-block retaining wall opposite my house. At 10m, their estimate of its height is even greater than my 6m and they claim this is blatantly illegal. As well as dangerous. As the photo below shows, the response appears to have been a pragmatic compromise based on a drastic tapering of the wall down from its peak of 6 or 10m to a low of 1m. Possibly this was intended all along but the fact that the unfinished low end used to be 2m suggests otherwise. 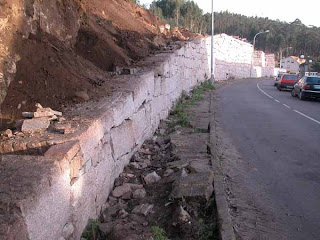 Perhaps a Spanish reader can tell me whether throwaway lines [‘dichos de paso’?] are well understood here. My impression is they aren’t.

Winter has finally arrived and the morning temperature has fallen from 12 to 2 degrees. But, as yet, there’s no snow on the distant mountain tops. My binoculars reveal only more titanic wind turbines, the ugly march of which cynics attribute more to the availability of EU corporate grants than to their supremacy over, say, private solar heating.
at January 23, 2007