Earlier this week, up near Ourense, a truck carrying 48 fighting bulls overturned, killing several of the poor beasts. The police tried to extricate the rest but ended up putting 18 of them down. But not before 4 had escaped. These were last seen running eastwards in the direction of Pamplona. Presumably they think life there is safer for them than here on Galicia’s roads. Or at least more fun.

To no great surprise, the EU Commission says only Italy is worse than Spain in failing to implement its directives. On the other hand, it’s my impression Spain leads the field in complaining about any risk to the ‘cohesion’ policies which still bring so much cash this way. I should stress I don’t think it’s necessarily a bad thing to ignore EU laws. Just that, at the very least, it’s not terribly consistent in this case. Which won’t worry many Spaniards, of course.

Still on the EU, the massive fine imposed on Telefonica has created quite a stir here and I suspect the chances of it being paid are small. One point made is that, as the company’s actions were approved by Spain’s domestic watchdog, Telefonica must be blameless. Others have suggested this is exactly what happens when friends of industry are appointed to run government agencies. Cronyism? Here??

It’s almost a year since the appalling fires of last August here in Pontevedra. So I was pleased to see this nearby plot of land – as last year – has dutifully been cleared of the scrub that doubles as tinder . . . 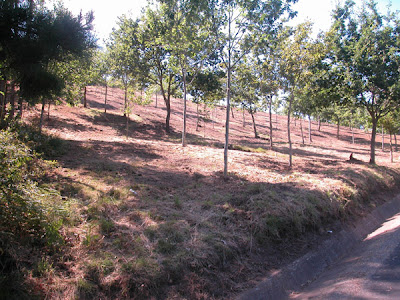 On the other hand, its neighbour was not cleared either last summer nor this year and now looks like this . . . 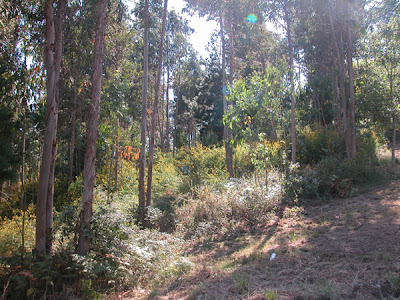 I do hope that plastic lacks the magnifying properties of glass, as even the cleared plot was strewn with the water bottles left behind by the workers.

Finally, as one or two of you may be interested in the property market in Galicia, here’s a few extracts from a report in today’s Voz de Galicia:-

- The housing market is beginning to show indisputable signs of exhaustion.

- The region heads the national table as regards the halt in building.

- In the first quarter of this year, Galicia had the lowest number of per capita property transactions in the country - 3.29, against 13.9 in 2006.

Of course, this is possibly excellent news for all you Brits looking to buy your dream home here. You may find sellers more willing to negotiate prices than they were last year. On the other hand, Galicians are famous for stubbornly holding out for what they expect until their noses drop off their faces. So, Good luck.