Last year, we were told the original inhabitants of Britain might well have come - about 15,000 years ago - from the northern coast of the Iberian peninsula. This week’s speculation – based on research being done in the Nerja caves in Andalucia – is that Ice Age inhabitants of northern Europe headed south around 22,000 years ago, or 7,000 years earlier. This makes a lot more sense to me. I wonder if they were plagued by caveshare sellers. And whether ice-deprivation sickness drove some of their descendants back north after a few thousand years.

Here in Spain, lawyers are not high status people, whereas notaries are demi-gods. My take on this is that governments which found it hard to tax its citizens on their income or assets majored on hitting them whenever they had to do anything official that demanded they prove something or other. And there’s a lot of this in Spain. The official appointed to oversee all this was the notary. So you can imagine how rich these have become over the last 10 years of a property boom. Anyway, it always amuses me to see the stupefied response of Spanish friends when I tell them notaries are virtually non-existent in the UK and that you can buy or sell a house without spending hours dealing with numerous documents and then sitting in the notary’s office with dozens of others [including 2 people from your bank] waiting for your turn to produce the cheque[s] and sign the papers. Most chastening is the news that estate agents don’t take anything like 6% [or even 3%] on the deal and the government doesn’t levy a 7% tax on it. But most astonishment is shown at my insistence that you can buy a house in the UK without ever even seeing the seller, your lawyer or any town hall official. Never mind a bloody notary who’s too damn busy for anyone’s good. The good news about the Spanish approach is that the notary will be cheaper than your lawyer, assuming you don’t regard time as money.

On a more macro level, early September Spanish news is not good on a couple of fronts. Apart from the dire road death numbers for the summer, it now emerges unemployment figures rose during a season when they always fall. The government’s line is roughly Steady as We Go but the right-of-centre press naturally sees it as the beginning of rough landing for an economy which has grown spectacularly in recent years. Out of a raft of data, they stress that on top of 12,000 in July another 22,000 workers lost their jobs in the construction industry in August.

As for the road deaths, the Traffic Ministry says it was largely a massive jump in motorcyclist fatalities which led to the trend reversal. It would be interesting to know how many of these were car licence holders who no longer have to pass any test in Spain.

As for Galicia, the Voz de Galicia this morning leads with the comment that our summer figures are the worst for all Spain. Again, it seems motorcyclist deaths were a major factor, along with what the paper calls Galicia’s endemic problem of pedestrian knockdowns. Closer to home, it’s reported that 75% of all points withdrawn in Galicia for bad driving belonged to drivers of the Pontevedra province. So, if you came for summer and survived, you were lucky, it seems.

On to lighter matters . . . Regular readers will know that, where I live on the hills above Pontevedra, we’ve been subjected to high levels of noise and dust for more than 18 months now, as they carve a building site out of a granite escarpment. But, finally, the stone-cracking machine may be nearing the end of its task. Here’s a photo of it excavating what I think will be the swimming pool. For those Nationalists planning to send an assassination squad, my house is the one peeking through the trees on the right. Honest. By the way, you probably can’t make it out but the operator of the machine is on the phone. Possibly saying “Err, my right wheel’s off the ground. What the hell do I do now?”. Or maybe he’s just chatting to his mate, like most other drivers here. . . 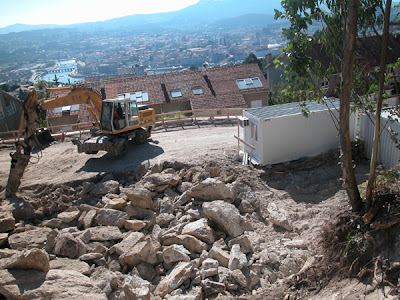 Even lighter stuff – Here are photos of a couple of new – and impressive – carvings which have appeared in the car park of the Granite Carvers’ School just above my house. What looks like a cemetery in the background is actually the dropping area for all their scrap rock. It used to be a car park. 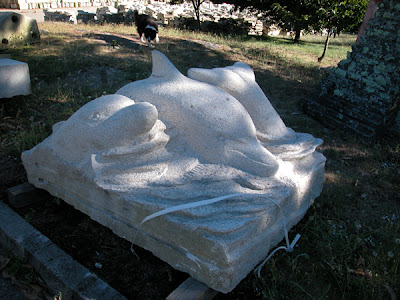 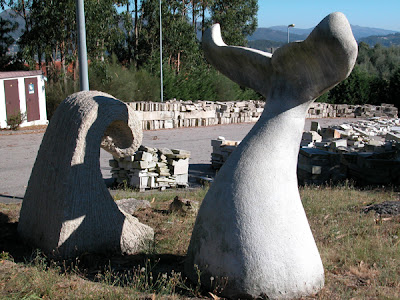 Colin, all western economies are about to see a downturn, specially those that are host to financial institutions that are tarty, with loose pockets.
Cheap credit is key to growth, but only in an ideal world where most people are sober, most of the time.

... and I wouldn't just blame the motorcycles - what about those small engined cars old fogies drive around, since they don't actually know how to drive hence no driving licence ?

I've heard of at least a dozen cases where small children have been badly injured, only last week a man in his 80s drove straight over a roundabout, flattened a street sign and just kept on going without even bothering to stop and look at what he'd done.

Colin, you're absolutely right. Charles Handy in the UK came out with the concept of high trust, low trust cultures. The higher the level of trust, the lower the incidence of red tape. Consequently, in low trust countries transactions follow the principle of maximum prejudice. If one takes Western Europe as the sample, Spain would definitely fall into the category of low trust, maximum prejudice countries. However, as you yourself frequently say, everything is relative. Compared to Russia, where I've been living now for the last 8 years, Spain is a heaven where efficiency, transparency, and honesty are paramount, definitely a high trust country. Not that this would be of any consolation to you. As for Spain being ranked below the UK in the Economist's quality of life index, some of the reasons for that should be obvious to you as they are a permanent feature in your blog: high noise levels, road death statistics, slack application of enviromental regulations,...... you name it.

You can blame the notaries and the low trust question raised by Moskva, quite rightly I think, on some of the "visitors" the Iberian Peninsula had, notably the phoenicians and other sharp traders, which brought what later became known as "la picaresca", well depicted in the "Lazarillo de Tormes" (1554?).

We all have our burdens to bear.

PHOENICIAN TRIBAL TITLE OF "BARAT" OR "BRIHAT" AND ITS SOURCE OF NAMES "BRIT-ON," "BRIT-AIN" AND "BRIT-ANNIA"

I have now been left wondering if "barato" has anything to do with the Phoenicians too, but I can't find the etymology. but it would make sense wouldn't it?

It is believed that the name Spain also comes from the Phoenician word I-Shaphan, meaning, rabbit land. There are other possibilities though. They certainly have left their imprint in this country.
Akra Leuke (Alicante)
Sexi (Almuñécar)
Abyla (Ceuta)
Qart Hadašt (Cartagena)
Gadir (Cádiz)
Onoba (Huelva)
Ibossim (Ibiza)
Malaca (Málaga)
Rusadir (Melilla) and others

Many thanks for this. I must look further at Handy's work.

As for quality of life, I guess the answer lies in the methodology, specifically in the weightings. Do they, I wonder, use a panel to arrive at 'objective' criteria? And how wide is the range of subjective attitudes it embodies? You can, for example, easily imagine a panel of all Spanish assessors taking absolutely no stock of noise levels which what others would regard as unacceptable.

And I wonder what weight is attached, if any, to having a thriving cafe culture. And to hours of sun. Or even just [sun]light. Presumably not much in the latter case, for Norway to come out on top.

Another factor, of course, is how old one is and whether one is still in the working population. On balance, I am very happy in Spain but I often say I'm not so sure this would be true if I had to suffer the frustrations involved in working here.

After 8 years, I guess you must have learned to accentuate the positives about life in Moscow. I assume there are some.