I’ve often said Spanish women bear themselves far more proudly than their British counterparts. Indeed, I’ve encouraged both my daughters to emulate them in this respect. So I was interested in this article by a woman [with a Spanish name] who explains why – despite equally pernicious media pressures – 70% of females here are happy with their bodies, against a mere 2% in the UK. But, as I don’t know whether she’s right or wrong, I will have to do some research on your behalf. I’m not convinced the women of Pontevedra eschew skinniness as much as the article suggests. But perhaps the city is an exception to the general rule.

Global warming: Confused? How could you not be? - “Satellite data confirm the northern hemisphere (except for western Europe) has been enduring its coldest winter for decades, with snow cover at its greatest extent since 1966. January's global temperatures were lower than their entire 20th-century average. Antarctic summer ice was at its highest January level ever recorded, 30 per cent above normal. Amid the continuing absence of sunspot activity, many thoughtful climate scientists now believe the Earth may be entering a period of marked cooling, similar to that which in the 1970s prompted fears of a ‘new ice age’. The "warmists" are already trying to explain that this recent drop in global temperatures is only "masking the underlying warming trend".

In a shipyard I can see from my window [well, almost], the largest sailboat in the world is about to be constructed. The Factoría Naval de Marín has started building the Hussar, which will have a length of 136m and cost €65 million. I hope to be able to watch its progress. And even post a few photos.

Meanwhile, here are a couple of pix of lampposts within 100 metres of my house. Personally, I regard them as dangerous but I suspect I have a different perspective on risk from my more laid-back neighbours. So it will be interesting to see how long it is before anything is done about them. Or before they fall down. 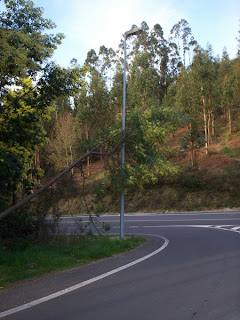 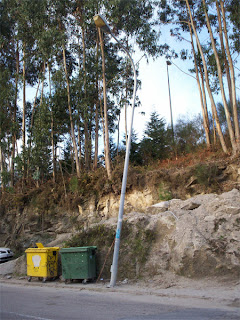 And here are photos of large granite rocks which were disgorged in the forest this week. Across the track and side-track, in fact. As I reported this to a couple of passing Guardia Civil officers yesterday, I should add that - in the event I suddenly disappear - the names of the truck companies are on my mobile phone. On the other hand, it might be significant the policemen didn’t take my name and address. Or even my identity number . . . So, it’s good I met a dog-walking neighbour when taking these snaps just now and we have agreed to make a formal joint denuncia at the police station tomorrow. Now, if both of us disappear . . . 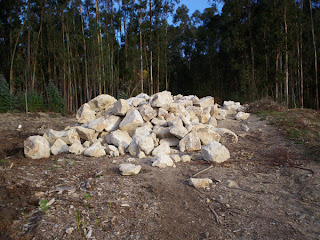 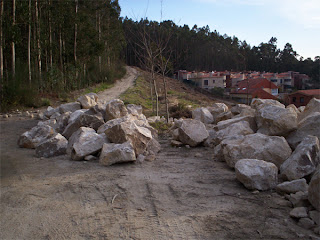 Keep us updated on the progress of the Hussar, Colin. Pics in progress etc.

It should be interesting.

Are those blocks going begging? Could do with them for my annexe. What's the number of those two building companies? :-)