The Spanish government says it wants to reduce bureaucracy in the interests of improving efficiency and productivity and so it’s bringing in a number of appropriate measures. I naturally wish them well but have my doubts it will involve any reductions of personnel in the midst of a recession. Madrid also says it would like the regional governments to follow suit, which I suspect is a rather pious hope. Especially as this announcement coincides with an article in our main local paper which, although giving thanks that Galicia’s drug barons are nowhere near as powerful as those of Sicily, expressed concern that widespread clientelism made the region inefficient, undemocratic and uncompetitive. But I’m sure all this will change after our imminent elections.

I may, of course, be wrong about President Sarkozy still acting as the head of the EU but I thought it was instructive he had the EU flag as well as the French flag behind him at his press conference yesterday. We may need him here soon. Someone arrived at my blog today searching under Invasion of bananas in Galicia.

A letter-writer in El País reports that Telefónica charged her for an ADSL maintenance service when she didn’t have ADSL. They assured her it was a mistake, that they’d refund her the charge and that it wouldn’t happen again. Needless to say, they didn’t and it did. And so she had to go through the usual calvario to get things sorted. She asked rhetorically just how many millions of people in Spain are getting these ‘mistakes’. Well, quite a lot, would be my guess. Perhaps the government of Spain could give some lessons in efficiency to one of the country’s largest and – need I say – most profitable companies. Or if Telefónica want to see how things are done properly, they could contact Brittany Ferries, who’ve just taken 30 seconds on the phone to sort out a problem with my payment details. And who didn’t ask me for my ID number, my address, my date of birth and my grandparents’ maiden and married names. And who offered a cheap phone line for the purpose.

Here’s the latest picture of the houses being built above mine and which may well be finished and occupied within five years. This is to reassure those who were unimpressed with the thickness of the brick walls, as it shows the granite facing being superimposed on these. The good news is that this process makes the building slightly more aesthetically pleasing. The bad news is that the machine which noisily cuts and shapes the granite slabs for eight hours a day has now reached my end of the site. 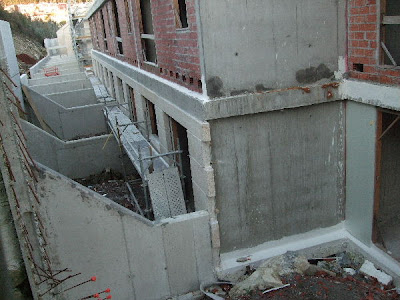 Finally, tonight is forecast to be the coldest of the winter so far in Spain, with temperatures up in the valley through which Sir John Moore led his retreating army to La Coruña predicted to be around minus 10. It’s also windy and long-standing readers will know this is when my central heating boiler gives up the ghost. Thanks to this, I might tonight be feeling more sympathy with the British troops who froze to death exactly 200 years ago than would normally be the case.
at January 07, 2009

Email ThisBlogThis!Share to TwitterShare to FacebookShare to Pinterest
Labels: Bureaucracy, Telefonica, The EU