It’s St José’s day here in Spain today, as well as Fathers’ Day. So a very good excuse for a holiday. Or, better still, a two-day ‘bridge’ comprising both Thursday and Friday, ahead of the real weekend. There may be a crisis but some things are more hallowed than others.

As for said crisis and its political consequences, I’ve already noted there seems to be minimal inclination here to punish the government for its mistakes and its ludicrous statements and promises ahead of the general elections a year ago. And, unless I’m missing them, there seems to be a dearth of critical articles such as this one from today’s UK press. I’m not, of course, the only one to notice this. Visiting Cataluña, the British columnist Matthew Parry found that, despite the fact Spain is being hard hit by the recession, “There is (to British eyes) a curious distancing from political argument. Nobody seems to blame the Government or bankers or anyone in particular. A friend told me that everyone accepted that economically things had been too good to be true for years, and something had to give. Now it has. People just ask why it took so long.” So a mood of resignation, if nothing else. Fatalism even. And, not for the first time, I find myself wondering whether attitudes here owe something to 800 years of Islamic influence. Which should upset one or two readers quite a lot. Perhaps it’s a lot simpler. Maybe the Spanish knew all along they were having a high old time at someone else’s expense – a standard Spanish aspiration – and that a bill of some size would be presented one day. And so it has.

The truth is that not only has the government not been punished at the ballot box – discounting Galicia, where other factors were at play – but it’s actually increased its vote in the Basque country and is now reported to be finalising a deal with the Opposition which will allow it to rule there for the first time since the end of Franco. All very odd.

I’m writing this blog in a wifi café, where – I have to admit – I am sitting as alone as last week’s pilgrim. But at least today Spain’s noisiest young male is not sitting with his slightly less vocal friends at a nearby table. The program on the several TVs is in English, as I can tell from the ads, if not from the songs. In fact, right here in remote Green Spain I’ve just been subjected to Churchill’s bloody bulldog saying . . . well, you know what the little sod says.

No one can say the Spanish aren’t a friendly people. But, based on my three years in Tehran, I’d agree with the view I recently read that “The ordinary Iranian people are by far the friendliest and most welcoming in the world.” That said, I’d be prepared to agree the Spanish run them a close second. Maybe it’s down to the Islamic influence again . . .

Finally, here’s a photo of a house being built down the hill from me. 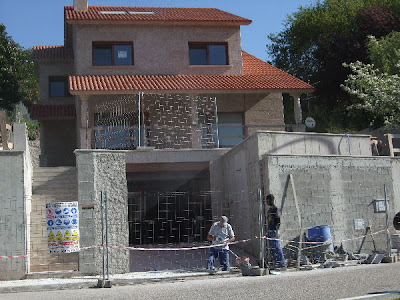 I show it here for no reason other that it may well be finished in under a year, possibly even 9 or 6 months. This may not seem unusual to you but it is where the average lead time is normally between 2 and 3 years. Which probably has more to do with the climate than with Islam . . .
at March 19, 2009