In 1984/5, I had the good fortune to lead a team which took to market the DNA fingerprinting technology of Dr (now Sir) Alec Jeffreys, who later got the Nobel prize for it. Right at the outset we had fun trying to figure out what applications it would have over time, including that of proving a product was what the seller said it was. But who could have imagined that one day I’d be sitting in Pontevedra receiving an email from a reader in Australia (Ian) telling me DNA fingerprinting had been used to prove that many ‘Albariño’ wines around the world are not cooked from the Albariño grape. Or at least not exclusively. Even, perhaps, here in Galicia, where it’s Spain’s premier white wine. It’s a wonderful world. See here for details of what the cat is doing among the pigeons. And, if there are any typos in this blog, put them down to the Albariño I’m possibly drinking as I type.

Today in Spain is officially the last day of summer. So a good time to summarise the weather of the last three months. In a word, neither as wet as it can be nor as hot as it usually is. Best described as more variable than usual, with changes taking place at greater frequency than normal. So, more ‘British’, if you like. Yesterday, for example was very hot and close (bochornoso), whereas today is just as sunny but fresco. I assume the wind has shifted from the south west to the north and that we can expect rain tomorrow. So, pick the meat out of that. If you want.

Or French friend, M Rocca, has now reached Andalucia in his military travels and waxes lyrical on what he found there. How intriguing to see him citing the same sort of thing as us later scribblers. . . . In Andalusia, still more than in any other province in the Peninsula, one meets with traces and monuments of the Arabs at every step ; and it is the singular mixture of the customs and usages of the east, with Christian manners, which distinguishes the Spaniards from the other nations of Europe. The town houses are almost all built on the Morisco plan ; in the middle they have a large court paved with flag stones, in the centre of which there is a basin, whence fountains continually rise and refresh the air ; the basin is shaded by the cypress and the lemon tree. Trellis work, supporting orange trees, whose leaves, flowers, and fruit last all the year, frequently covers the walls. The different apartments communicate with each other by the court, and there is commonly an interior gate on the same side with the door opening to the street. In the ancient palaces of the Moorish kings and nobles, such as the Alhambra of Grenada, the courts are surrounded with colonnades or porticos, whose narrow and numerous arches are supported by very tall slender columns ; ordinary houses have a single and very plain interior court, with a cistern shaded by a large citron tree in one corner. A sort of pitcher or jar, in which water is put to cool, usually hangs near the door or wherever there is a current of air. These pitchers are called alcarazas, and their name, which is Arabic. These jars have the same form, and are applied to the same purposes, as those described by M. Denon, in his travels in Egypt ; and which are made on the banks of the Nile, between Tentyre, Kenan, and Thebes indicates that they were brought into Spain by the Moors.

Strangely enough, we have an exhibition in Pontevedra this week which pays homage to the Arabic architecture of the Alhambra. Or that’s what it says here in the brochure. You can make up your own mind . . . 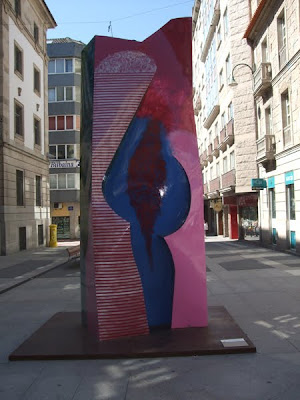 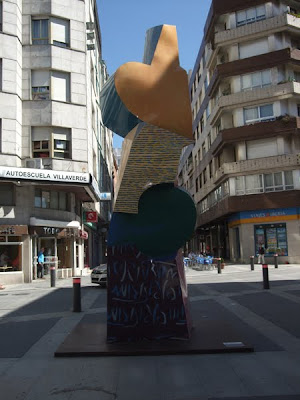 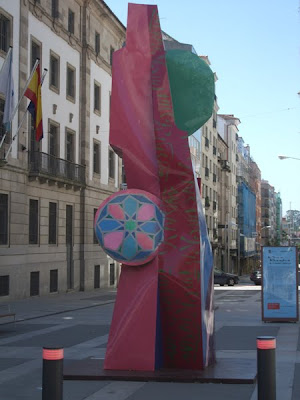 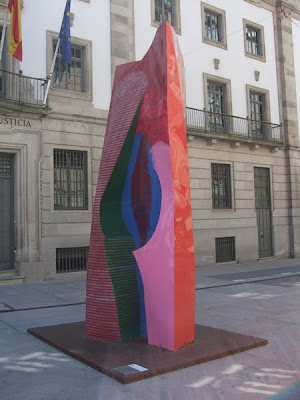 I saw those sculptures in Santiago when I was doing my language course. Some of them are quite beautiful but others...not so much. A lot of people just think they're an eyesore and they certainly do stand out.