I’ve mentioned that George Borrow was none too keen on Galicia, Galicians or the local language, Gallego. Having now gone back to the beginning of his book, I can’t help wondering whether his distaste for the language arose from his attitude towards Portuguese – expressed in this passage about his border crossing:- In little more than half an hour we arrived at a brook, whose waters ran vigorously between steep banks. A man who was standing on the side directed me to the ford in the squeaking dialect of Portugal; but whilst I was yet splashing through the water, a voice from the other bank hailed me, in the magnificent language of Spain, in this guise: "O Senor Caballero, que me de usted una limosna por amor de Dios, una limosnita para que io me compre un traguillo de vino tinto" .

These days, I guess we’d just have to dismiss Borrow as a Spanish nationalist.

Another paragraph that tickled my fancy was this one, written just after he’d expressed regrets at losing his temper at a Portuguese soldier who seemed rather ungrateful for the loss of British blood shed in Wellington’s campaigns between Lisbon and Spain:- The French have ravaged [Portugal] with fire and sword, and shed the blood of its sons like water; the French buy not its fruits and loathe its wines. Yet there is no bad spirit in Portugal towards the French. The reason of this is no mystery; it is the nature not of the Portuguese only, but of corrupt and unregenerate man, to dislike his benefactors, who, by conferring benefits upon him, mortify in the most generous manner his miserable vanity. There is no country in which the English are so popular as in France; but, though the French have been frequently roughly handled by the English, and have seen their capital occupied by an English army, they have never been subjected to the supposed ignominy of receiving assistance from them.

Back to Spain . . . Here’s the latest Economist view on her economy. Which reads both convincingly and depressingly.

And back to Pontevedra . . . If you ever come visiting, you might want to see our many petrogliphs in the hills near Campo Lameiro. But you don’t even have to go that far. For, a few metres from my house on the hills overlooking the city, there's a new ‘petrogliph park’, just opened by the council. As you can see, the best thing about it is that they’ve killed all the eucalyptus trees around it. 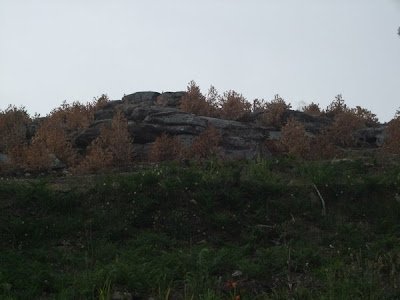 And here’s the stairway up from the road. As you can see, it’s made of wood. Untreated wood. So, don’t leave it too long. 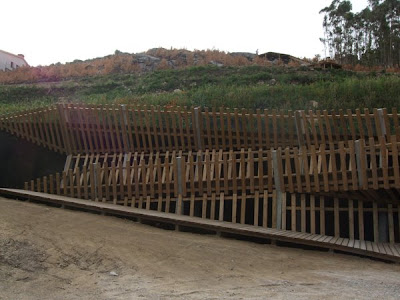 Finally . . . Against the background of the current fight for urban supremacy in Pontevedra province between Pontevedra city and Vigo, I was interested to see in the exhibition on The Peninsular War that, in 1813, Pontevedra wasn’t even one of Galicia’s then six provinces. These were Santiago, Ourense, Tui, Betanzos, Lugo and La Coruña. Or they might have been; I’ve lost the relevant scrap of paper. As if anyone cares . . .
at August 02, 2009

If they make the stairways out of eucalyptus wood, they'd have a 'renewable resource' and could rebuild them every time they wore out, as long as they let the trees grow back each time.

"As if anyone cares..." - There's one trick for caring about data like this: always play Trivial Pursuit for money.

The wood bridge seen on 1'22 it´s there from more than 10 years now and has suffered many storms.

As you can see, it appears as "untreated". Long time ago there were many docks of only wood. The treatment was only let the logs on the sea tied down, many months before use them as a building material.


You´re touching now some of the clues of the situation that GB has encountered on Galicia. In my opinion it was in Galicia the fiercest oposition encountered by Napoleón on Spain, and not precisely on the army, but on the people. This oposition was due to the requisition of food and supplies from the peasants and some abuses on galicians by french soldiers. Galicians then started a war that was the first real trouble of Napoleón on Europe. Three months after they entered on Galicia and Portugal, the french had to retreat to Leon, and from then on, Galicia was the only place relatively free on Spain. Galicia, Asturias and Portugal were the supply of youth for the war in the peninsula. But this effort caused starvation, a big mortality on young people and the ruin of most of his economic system. Since Galicia had little more than his own resources, even with the help of british, that caused that even in 1850 the effects were so disastrous than a big (and the first) emigration took place flying from famine, autorized by central power. You can contrast this:

But galicians, at least, have some words from Lord Wellington after the last big action on Spain (battle of San Marcial):

Perhaps if the french were not so rude, we (you and me) were writing in french by now.

Ointe, thanks for the link to Memoirs Of War…. An absolutely charming book that I have just spent part of my lunch time reading a few chapters.

Incidentally, isn’t it strange that we have to go to an American sponsored web site to freely access, read and download European books and manuscripts. Try the same thing at a European site and see how far you get.

I agree with you in this point.
I´m acustomed to the loss of "information" in history. And also seems true that in every country happens the same with his own history. That´s why, in general, it´s useful to search what "the opposite side" has to write about the same facts.

Anyway, the work on these american web pages is very good on our history. They deserve recognition of his merits.