You have to have a twinge of sympathy for the global warming scientists. After all, they may be right with their doomsday projections. But it doesn’t help that various places in the world are currently experiencing their coldest winter conditions in many decades. Or that 2009 didn’t turn out to be as warm as predicted. Then, of course, there’s the scandal surrounding the East Anglia data and the controversy around the business interests of one or two leading lights in the AGW “community”. Such is life.

A propos . . . When I came to live along the Galician coast in 2000, I was told it snowed here only once every hundred years or so. Well, here’s the evidence that flakes do occasionally fall here. 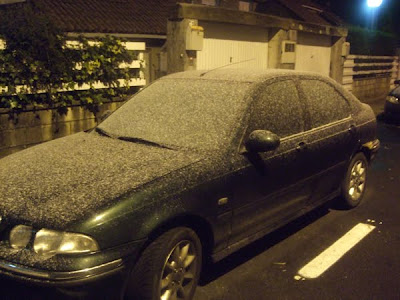 More interestingly, this is at least the second time in nine years this has happened, if not the third. No wonder there are Global-Warming sceptics around. And I wonder how long it’ll be before the conventional wisdom returns to what it was a few years ago, viz. that we’re heading for a minor ice age.

Reader Richard sent me the following Financial Times headline this morning and, but for the density of the cigarette smoke surrounding me in the wi-fi café, I might well have fallen off my chair in laughter:- Spain aims to bring EU states into line. Zapatero seeks powers for Commission to police compliance with ‘2020 strategy’. Interestingly, the Spanish economy watcher, Edward Hugh, picks up on this theme here.

Being neither right wing nor a Catholic, I only flick through the ABC newspaper when there’s absolutely nothing else on the rack. But, as luck would have it, this was the case today. And so I was able to enjoy a polemical little piece by one Carlos Herrera, inspired (if that’s the right word) by the above(widely-read!) FT article. This was headed “The insufferable, centuries-old British contempt” and in it Sr Herrera confesses the only Brit he likes is Prince Charles. The rest of us are unpleasant, disdainful, boring drunkards who are afraid of the French but look down on the Spanish. Being of the Right, he then goes on to say that, though he shares the views of the FT on Spain’s socialist government and our parlous economy, it doesn’t lie in the mouth of a British newspaper to comment on them. Essentially, Sr Herrera – who seems unaware the FT is an international journal which criticises every country’s government - is an upmarket version of the Spanish internet lout who screams abusively that, while what you write about Spain might well be true, you have no right to say it as you’re not Spanish. And, as is ever the case, the angry writer fails to apply the logic of this stricture to his own views of Britain and the British. All in all it’s a very tabloid bit of writing for a serious paper and so I wonder whether it’s actually a spoof, as it certainly made me laugh. If not, it must be Sr H playing to the gallery, even though he could well enjoy visiting Britain and have some British friends. He might even speak English. Be all that as it may, the article ends with the word coño. Or ‘cunt’. Which may or may not be entirely appropriate.

Other cafés in Pontevedra, I’m told, have raised their prices by up to 10%, leaving us all still wondering where our much-vaunted deflation is. If you haven’t already read it, here’s how Edward Hugh addresses this issue in the article cited above:- Whatever happened to the 'deflation scare'? Well basically, it has been put on ice. But it will come back. If we look at what the EU are proposing in Greece, it is not only a reduction in the current fiscal deficit, it is a restoration of competitiveness. This means internal devaluation. And by the same logic this is the policy which will need to be introduced in Spain under the "2020 (vision) strategy" - using powers which José Luis Zapatero is himself proposing. Basically, the fact prices rose in 2009 is not good news; it is simply a symptom of the inability of Spain's economy and society to correct itself unaided. Meanwhile, Edward is lucky enough to patronise a bar where there is price stasis.

Finally . . . Here is someone else’s view of flying, which echoes mine precisely:- “I reckon that full-body scanners - some stranger being able to see not only whether your knickers are made of dynamite but also what you had for your lunch - could be the tipping point for air travel. Flying is already a god-awful experience in the main, boring yet frightening. Now comes this latest piece of technology to delay and humiliate the long-suffering passenger further.” Quite. To be avoided at almost any cost. IMHO, as they say.
at January 08, 2010