There was a strange meeting in London yesterday, involving the heads of the governments of Britain, Spain and Greece. One wonders what on earth they can have chatted about. Other than the parlous state of each of their economies, of course. And perhaps Socialism. Anwyay, Gordon Brown must have been disappointed to see himself called Mr Brow in one of Spain's national papers today. Whether high or low, they didn't say.

El Mundo had a foto of Brow(n) and Zapatero entitled "Red ties and red numbers", which was quite clever. Or at least amusing.

El Mundo also stressed that the messages issued by Sr Z. in London about Spain's plans were contrary to those cited by his Ministress of the Economy in the same city last week. But, then, they would. And he would too. Can anyone be surprised that few even on the Left have any confidence in him anymore?

But, anyway, I'm coming down with a cold or even the flu, so I'll leave you with these fotos of el entierro (burial) of our Lenten offering last night. Since he was, as usual, immolated, it really should be called la cremación, I guess.

Ravachol the parrot, dressed as a speed cop:- 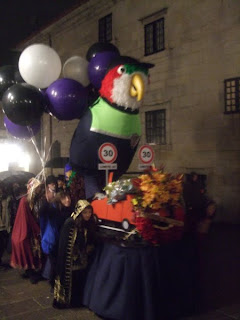 Young dancers who had the sense to wear a cape as protection against the cold and the rain:- 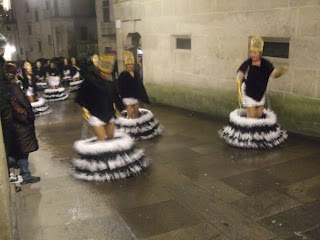 And some poor creatures who didn't:- 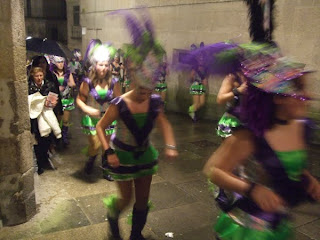 I did try to get a foto of a nun, whether smoking or not. But there were none to be seen among the bishops and cardinals.
at February 20, 2010

Maybe the monjafumeiro was in Santiago getting a light from the botafumeiro.

Mr Davies, c’mmon, it’s neither “el entierro“ nor “la cremación“. You should know better by now, after 10 years living in the country. Ever heard of a language called “galego / gallego / Galician“? C’mmon, you are a “Galicianist“, aren’t you? So let’s keep Galician then. That’s “o enterro da sardinha“. And “Ravachol“, that’s not a Spanish (Castilian) name, either. The same with your place, which is not “Puente Vedra“, is it?


I know this is difficult to get under the thick skull of your readership, especially those who live in the monolingual Galician cities (many of its dwellers as proud as ignorant), and thing of Galician as a thing of the folk in the hills, but hey! that’s where a truly Galicianist comes into place, isn’t it?, to explain the “Galicianist“ thing ...


Anyway, wish you a speedy recovery.

If you feel you really must use abbreviations in English in order to demonstrate your super fluency, then it is beholden on you to do it correctly. For example, English speakers understand "c'mon" to mean "come on".

"C'mmon" as you typed, means common. An appropriate word to describe the noxious, scribbling, insulting, little oick that you are in these columns. Do you like sex & travel, by any chance?

Pericles I have sore sides from laughing at your last sentence!

you shouldn't worry too much about the literacy standards of anyone, as long as you understand what they are saying or writing, unless you have a point to prove or an axe to grind. Or perhaps you think of yourself as cleverer than the average chap, that you have to clarify the meaning of that word incorrectly spelt, in case someone didn't get it.

But most probably, yes, you had a point to prove: you are not one of those thick people who laugh painfully at clever comments. Good on you.

I'm sure one day, now that we know you are not one of the thick ones, you will give your opinion on any of the issues that I raised, in a more or less jocular way. I look forward to it. In the meantime, go fuck yourself, big little dickhead.

Cade I have been laughing so much about your last comment in Galego that my wife had to slap me around the face to bring me back to normal. It isn't fair to write your comments so that thick skulls can read them. Oops made an error because you are an avid thick skull reader of this blog as well.

"Gordon Brown must have been disappointed to see himself called Mr Brow in one of Spain's national papers today. Whether high or low, they didn't say."

I actually found this quite funny! I think I'm starting to really get British humour because, out of all the Americans I know, I would be the only one laughing. Crossing the Atlantic changes a person.

(Please, let me know if there is any spelling mistake here)

Who cares? It's Vulgar Latin, probably!

And now a language, where the spelling thereof, is a minefield.

Personally, I applaud the efforts of Real Academia Galega to endeavour to persevere.

Strange to tell though, I don't see your name in the list of current members. Do not hide your light under under a bushel. Demand your admittance.