More fun on the streets of Pontevedra last night, with several more itinerant groups doing their stuff in the squares of the old quarter. Including this one of be-stilted devils and zombie drummers. 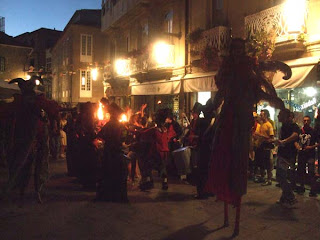 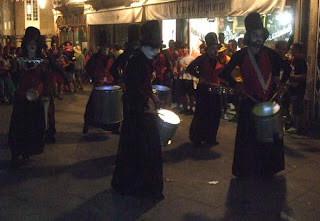 Prior to seeing these, I had to wade my way through hundreds of inebriated youngsters who’d spent the evening throwing wine both at each other and down their own throats. It says something about Spanish youth that not one drop was aimed at me as I threaded my way through the more-than-happy throng. Two questions asked themselves as I did so - Can some of the girls really be as young as they look, which is about twelve? And why does one only see young men urinating in the corners of the calles? Anyway, it was impressive to see the municipal teams already clearing up as the bacchanal progressed. Just as well, really, as the place was awash with plastic bags and bottles. All good, clean fun. Which left me with the final question of whether only a country so previously Catholic as Spain can indulge so wholeheartedly and so innocently in rites so pagan in their origin.

As for the young men peeing in the streets, there was a cartoon in El País today which centred on a Spanish spacecraft on its way to Mars. In the corner of one part of it, a damp area was labelled “Meado’s corner”. Mear meaning ‘to pee’ in Spanish. So, a national institution, I guess. Like bullfighting.

Talking of which, the second of our four annual bullfights is tonight. And here’s positively the last article on this subject. El País today reported the none-too-surprising finding that only 40% of Spaniards support the activity but 52% don’t think it should be banned. Which it probably isn’t going to be in any other part of Spain for quite some time. Though doubtless the Galician nationalists will be promoting this very soon. If they haven’t already started doing so.

I said the other day that the leader of the Opposition - son-of-Pontevedra Sr Rajoy - would be attending the corridas, as he always does. He was filmed leaving Madrid by car, talking to a colleague by his side. Neither of them was wearing the obligatory seat belt. So, what does this say about the Spanish approach to rules? Nothing new, I guess. Like all good Spaniards when caught out, he has since apologised profusely. So that’s that.

I mentioned a week or two ago a new bar in the town centre called Los Castellanos. My own favourite place, El Siglo, is next door and I was asked yesterday by one of the bar girls there whether I’d been in the new place. When I said not, she seemed surprised. “People say we’re losing customers to it”, she told me. “Why would they transfer their custom?” I asked. “Because it’s new!” she retorted, in tones which suggested I was an idiot for not appreciating this. And then I recalled how often over the last ten years I’d been told that a new place was the latest fashionable place to go to in this snobby, funcionario-ridden little provincial capital. Beats me. But Los Castellanos does have wifi and I’m now using this factor to crank up my campaign for this in El Siglo.

Finally . . . What a delightful show of Spanish nobility when Jesús España (what a name!) fulsomely congratulated Mo Farah after he’d pipped him to line to win the 5,000 metres at the European Championships yesterday.
at August 01, 2010

I doubt anywhere near 50% would be against a ban on bullfighting in Galicia...attitudes generally range from apathy to what most people see as a foreign custom, to outright hostility...there is a long history of incomprehension of bullfighting in Galicia, probably largely to do with the history of famine here, killing bulls for fun was seen as the rich rubbing salt in the wounds of the poor (see the whole chapter on this subject in Castelao's 1933 Sempre en Galiza). Also Galicians have a greater level of respect for cows and animals in general ... no fiestas involve throwing donkeys out of bell towers or decapitating live chickens here.