Almost the first thing my younger daughter said to me this morning was “Dad! How many times do we have to tell you red is not your colour?”. Can you imagine a son saying this to his father? Well, I certainly can't.

But, anyway, the good news for Spain this summer is that tourist numbers to the end of July are 3% up on last year, particularly as regards North Americans. The leading 'provider' countries were Britain(1.8m), France(1.3m) and Germany(1.2m), all up on last year. In contrast, numbers from Ireland, Holland and Belgium all fell. Of the regions, Cataluña saw the biggest increase. Galicia hasn't been mentioned so far.

My 'article' on corruption in Spain is still a work-in-progress but I thought I'd cite a BBC podcast on Spain which touches on it, via a reference to 'venal bungling' on the part of politicians here. This reminded me of one of my interim conclusions, viz. that few are the politicians and businessmen in Spain who can resist any chance they get to line their pockets fraudulently. During the boom times – with Spain awash with (mostly German) money, the opportunities were simply far more frequent and larger than ever before. Those that seized them are the ones whom the recession-cum-depression is not affecting much, if at all. Lucky bastards, you might say. With an emphasis on 'bastards'.

Relatedly, here's an article (HT to Dwight) on the culture of Galicia's savings banks (cajas/caixas). I've no reason to suppose things were much different elsewhere in Spain. I laughed out loud at Sr Gayosa's statement that he never took any decisions. One of the thing's he's accused of is hiding his pension of 689,000 euros a year from his Board. But, after 40 years as the chief executive, what can you expect? Barons are barons, and they always have been in Spain. Both in business and in politics, where the 19th century term cacique is still used. A probable exception is the guy who founded and still runs Inditex, the parent company of the phenomenally successful Zara. And maybe Sr Botín at the top of Banco Santander. But the jury is still out there.

No sooner does our big Fiesta fortnight end than work begins on the Medieval Fair(Feira Franca) of the first weekend in September. As I regularly say, the Spaniards are never more efficient than when they're preparing to have fun. So – with ten days to go - the old walls and gates of the city are already being set up in wood and canvas, impressively painted. Witness, the preparations near the town hall this morning:- 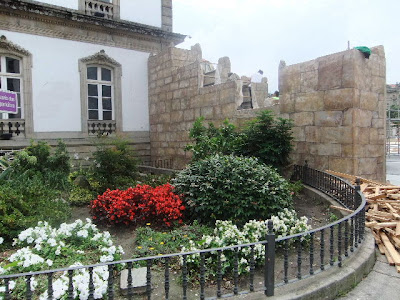 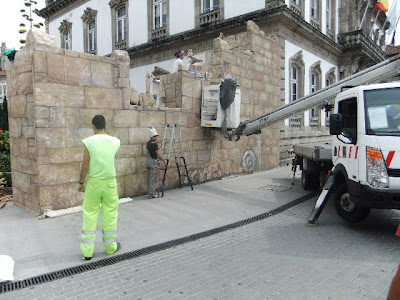 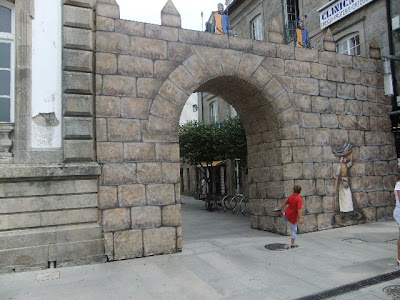 In Spain, easier academic subjects are referred to as marias. Don't know why; perhaps someone can oblige with a theory. I thought of this when reading that the UK government had decided to reverse the initiative of the previous government in making various easy subjects (theoretically) equivalent to standard subjects. The former include – are you ready for this? - Make-Up, Holistic Therapies, Horse Care, Cake Decorating, Pastry Craft, Interior Design, Floristry, Call Centre Skills, Salon Reception, Soft Furnishings and Sugar Confection. Of course, one isn't arguing against vocational subjects, merely against the politically-driven desire to equate them with more rigorous subjects so as to make schools look better.

Talking about looking better . . . I wonder if any other city in Spain has as many pencil-thin, be-skinny-jeaned women in their 40s and 50s wandering around on 4 to 6-inch heels as Pontevedra does. Usually puffing the appetite-suppressing cigarette that helps to keep them so terribly thin. As regular readers may recall, this leads to the phenomenon of the 16/40 - a woman who looks 16 from behind but 40 from the front. Not to mention the 16/50s and even the 16/60s who spice up our pedestrian life.

Finally . . . Here's a sight one sees at most fiestas in Spain – a stall selling knives, cleavers, machetes, axes and the like. 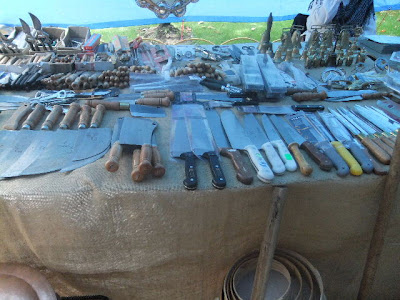 I think I'm right in saying this would be impossible in the UK, where you have to make an application to the police to buy so much as a pen-knife. Thanks to the knee-jerk 'something must be done' merchants and, of course, the scabrous tabloid press.
at August 23, 2012

I have a different view on things. Not wishing to be unkind to Spanish women, I must say that compared to their long-legged, wasp-like-bellied, scultural slavic counterparts in sky-high heels and tiny mini-skirts they look definitely taudry and shabby. I have never been to Ponters in my life but I bought a flat in Valencia last year (I have probably lost a lot of money doing that) and that is were I spend my summers. Impirical evidence has lead me to conclude that Spanish women are short-legged fat-arsed creatures (nobody can say I don't know how to be big-mouthed and unkind when I make a some effort) who lack any sense of shame and manage to squeeeze their unimpressive physiques into miniature tight shorts and think that by going top-less on the beach and wearing piercings and tattoos all over (probably as much as smoking) are making some sort of feminist statemet.

I just read another post about youth unemployment in Spain (http://zoetropic.wordpress.com/2012/08/23/the-indignant-indigent-youth-of-spain/)
and I was curious about how unemployment is in Galicia - have there been many protests? Are young people protesting or getting depressed or just leaving?

Well, I've been researching this for a couple of days and I don't recognise the sort of Spanish women you are condemned to look at down in Valencia. Legs are long and bums small here. Perhaps it's the Viking, Norman and British pirate blood!

Are you sure your aren't not just brown British women? They certainly sound like them!!

@Penelope. No, there has been precious little protest. The only reason can be that the unemployed simply go back home and don't have to contribute a red cent to the costs that their parents now have to (re)pay.