The Spanish Train Tragedy 18. And other things.

The Spanish press is reporting that 'court sources' say the driver admitted to an oversight that led him to be doing nearly 200kph as he entered the 80kph zone and then took the sharp bend. There is no news on what this oversight was and how it came to happen. The more important question of whether controls failed has yet to be answered. The black box data is said to be under analysis as of today.


As we wait, the President of Adif appears to have jacked up his opinion from "The driver should have started to slow 4km from the bend" to "He was warned to slow down 4km from the bend." Again, we don't know who warned him and what they did when they were ignored.

Someone who was on the train has said she looked up just before the crash to see the speed panel reading 210kph. This is odd, as there've been regular statements that the AFSA control system would cause the train to brake if it went above 200kph.

The railway drivers' union has, understandably, expressed concern that Garzón had been formally accused before the extraction and analysis of data from the black boxes. Especially as he was known for his prudence. Perhaps this is why the judge distanced himself from the police decision to arrest him.

A resident of the village near to the accident reports that he heard the driver say he couldn't brake as he came into the bend but this is susceptible to different meanings.

In short, we may now know the legal status of the driver but the rest will remain unclear until we have the analysis of the black box data.

Meanwhile, it's sad to know that it didn't take long for someone to try to take advantage of the crash to make a claim as the alleged partner of one of the victims.

Life, of course, goes on for those of us fortunate enough not to have been involved in this or any other tragedy. Today I decided to take a look at a religious ceremony cited as No. 2 on a list of the 10 oddest 'fiestas' in Spain - in Santa Maria de Riberteme, down by the border with Portugal. I had wondered whether it would be cancelled, as we have 3 days official mourning left in Galicia, but - perhaps because of its non-jovial nature - it wasn't.

The centrepiece of the ceremony is a post-Mass procession of insignia, statues and open coffins. The latter contain people who've had a near-death experience during the last year and it was reported that, apart from a local or two, people had come from Madrid, Barcelona and even Argentina for the honour of sampling the coffin experience and being carried round the village to the sound of a mournful band.

Anyway, I leave you with some fotos:- 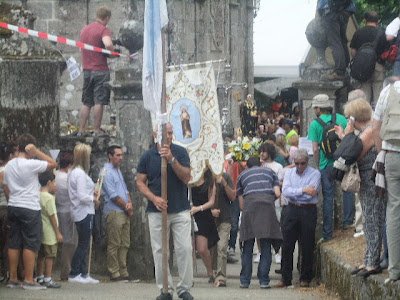 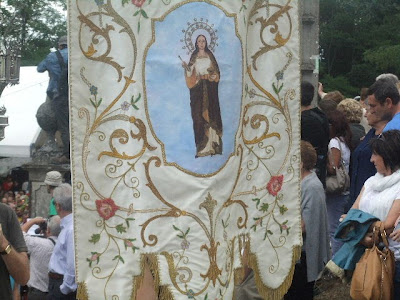 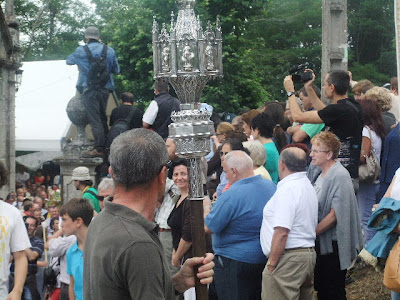 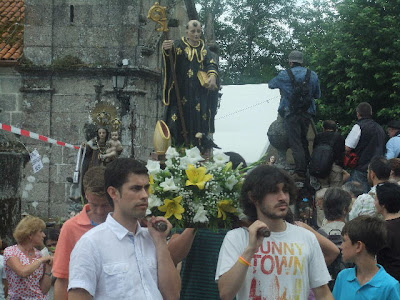 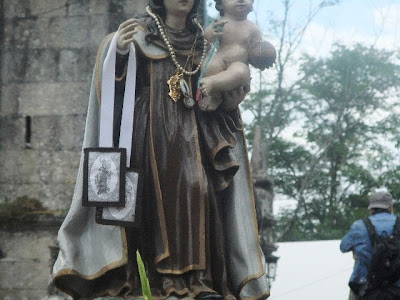 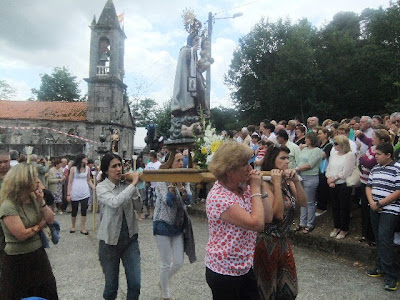 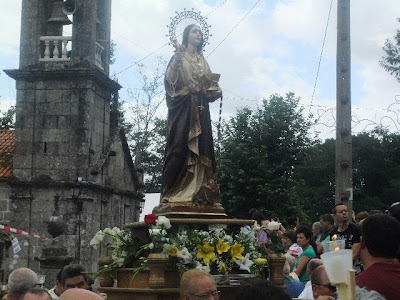 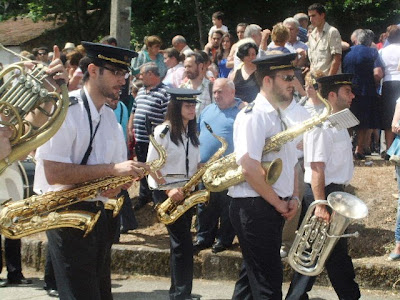 Colin, What's this Santa Maria de Riberteme stuff? - Stuff and nonsense I say, but pretty pictures none the less. Have you morphed into a tourist?

How do these guys & gals get to think this stuff matters one jot, as their elected representatives screw them for every Euro they can, to live in idyllic splendor, while chomping through kilos of Jamon Iberico de Belota.

Nice to see you return to your old beat Colin, keep at it, hope you manage to drum some Anglo Saxon mores into those hedonistic Spanish Grandees before you're gone.

I come from a family of pious Catholics and pious Jews, so I have to be careful what I say.

I've wanted to see this procession for hears, macabre as it is. As I said to my (Catholic) sister, it strikes me as Christianity at its most pagan.

Some nice figures on attitudes to the politicos in the press today. Tomorrow's post.

Many thanks for the kind comments. Much appreciated.

So far, I have not been able to confirm if drivers of TGVs or Eurostars have maps with them as they drive. There is a monitor.

Driver Garzon had made the journey 60 times, so he should have been very familiar with the braking zones.

Before Eurostar trains began running into St. Pancras International, they had to meander into Waterloo International, gaining the Chatham main line by way of Fawkham Junction.

Perry, I believe your picture showing a driver's view of the track is from a different type of train - Yours shows two windscreen wipers whereas the wrecked Class 730 train had just one.

That's an excellent photograph. With all that equipment, why didn't Renfe commission the ERTMS?

OTOH, a huge trackside notice, warning drivers to slow down & positioned seven kilometres from Santiago is a good low-tech solution.

Is there someone, somewhere, groping around for a dropped bollock? Maybe the driver is not the only one in hot water?

See comments on today's post. He may just have been distracted by a RENFE phone call when he passed this sign.

Yes, I saw the news about the phone call. At 200kph, the train will travel 3.33kms in one minute; that's the slowing down distance. Who initiated that call?

The politicians may wish to throw the driver to the wolves, but someone in Renfe or Adif made the decision about not using ERTMS & that inconvenient truth will have to be addressed.

As for the notice board, I'm suggesting there should be one, because I don't think there is one.

From what I have read, ERTMS & Asfa Digital are installed on 80 Kms of the line, with 50 year old analog Asfa for the final 7.5Kms, but only Asfa Digital was being used. It's bizarre, as is a report that there is an "escalation of statements seeking to degrade the value of the new railway line between Santiago de Compostela and Ourense in an attempt to avoid the consequences of the accident to contaminate all the Spanish high-speed."

I wonder what tomorrow will bring. And what pressure will be put on the investigating judge/magistrate.