Well, the Gibraltar farce seems to have lost its Page 1 status here in Spain, though it's reported in the UK media that the government there is considering hitting Spain where it really hurts - the tourism business. I'm not sure what they can legally do but it'll be interesting to see what happens next. Meanwhile, the Spanish government has wrapped itself in the cloak of environmentalism in order to attack the root cause of this unholy spat, the creation of an artificial reef by the Gib government in disputed waters off The Rock. This is truly rich coming from a government which has not only permitted but encouraged the rape of its coastline. And is still doing so, via the dilution of its Coastal Law. But hypocrisy is not confined to Spanish governments, of course.

Pontevedra has a lovely little museum, housing a rather eclectic collection of items. A couple of years or more after it was completed, these are finally being moved to an ugly new granite and glass building down behind what used to be a Jesuit convent, now the town's archive. Ten years ago, I offered to translate (for free) all the labels in the old museum, to be told there wasn't space for this but they'd call me in a couple of years (2006), when everything would be moved to the new building. Well, they didn't and I'm not holding my breath. I've learnt over the years that offers of free translation aren't welcome. They deprive someone of the chance to give the work to a relative who once knew someone who said they spoke English. And now has access to Google Translate.

I don't know whether it's La Crisis but Pontevedra this summer seems quite overrun with beggars of every description. Does this take place in other EU countries? I don't recall it happening down in Portugal but I may be wrong. As we're going there tomorrow, I'll have a chance to check. It is, of course, a bloody nuisance being interrupted every 2 or 3 minutes as you're trying to read a paper but it's also more difficult than ever deciding who merits something. Certainly not the woman I've seen begging for more than ten years and whose clothes have got more and more decent - fashionable even - over the years. Nor the irritating druggies who tootle on a recorder for 10 seconds and then put on what passes with them for charm. Truth be told, I tend to take a-plague-on-all-your-houses approach to this daily problem.

There has to be a book in it. Spain's railway stations are often charming and sometimes outstanding. This is the building which used to be Pontevedra's central station, before the line was moved to the north of the city and a new station built on the eastern outskirts. 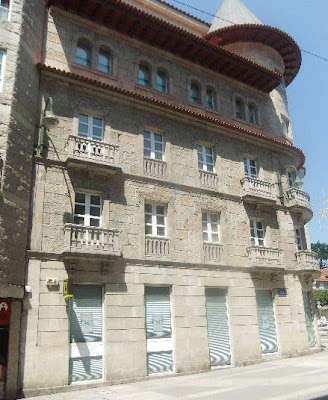 And talking of Pontevedra's fine buildings, here's the newly cleaned and tarted up town hall, built in the style of our Portuguese near neighbours:- 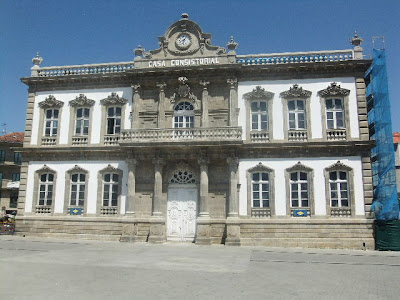 And here's the last foto of the day - a mosque in - I think - Mashad, in Iran. But it may be in either Esfahan or Shiraz. That's the problem with not annotating your albums. Anyway, it's here because I was wondering yesterday whether it's still possible for a non-believer to enter the shrines I enjoyed visiting a few decades ago. Indeed, I think even my wife did, albeit clad in a chadour. I believe I have fotos somewhere of the inside of one of the shrines in Mashad, which I'll post if I can find them. 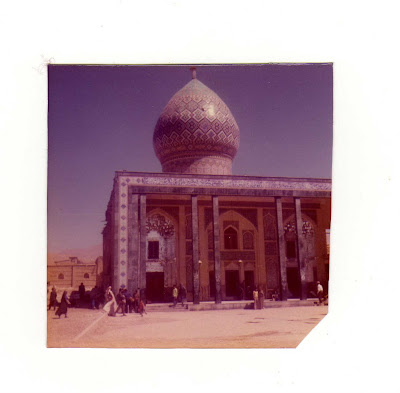 Finally . . . Here's a short video of a charunga - a brass band - doing its rounds of the old quarter yesterday. It's one of the features of our week-long fiesta in honour of one of Spain's countless virgins of old. I think this one is the La Virgen Peregrina - The Wandering/Pilgrim Virgin. Who came here - of course - in search of St James, or Santiago.