There's been a lot of attention this week to the Catalan desire for independence. Or at least a referendum on the subject. Reading the reasons why Cataluña should secede from Spain, I was struck that all the criteria would apply equally well to the City of London:-

So, yes. Independence for the City of London. Meanwhile, if you want one perspective on the Catalan issue (from someone who lives there), click here. Unless you are Charles Butler.

A few years ago, a scientist called Alan Sokal, fed up with the nonsense being spouted by egregious deconstructionists and postmodernists, decided to compose a "pastiche of left-wing cant, fawning references, grandiose quotations, and outright nonsense, structured around the silliest quotations I could find about mathematics and physics". He submitted it to the journal Social Text. Which, despite it being absolute tosh, printed it. You can read the article here and read more about the affair here.

I had a dim memory that this sort of thing had also been done for the deconstructured English language, when computer-generated nonsense had been accepted for publication but can't find any evidence of this. But I did come across this fascinating list of hoaxes and hoaxsters. Which includes Uri Geller, to the possible surprise of some.

Just following up what I wrote yesterday re ADIF and its response to the Santiago train crash. . . Referring to its (inescapable) decision to improve its safety systems, the company added: "These [new] signs will boost safety but the system is already safe." This reminded me of the waiver stamped on the airwaybill of the dog I brought back from Iran - "British Airways accepts no liability for death caused by mortality." Or vice versa.

Spain is getting €100m from the European Investment Bank (a loan?) to "co-finance projects in areas such as services; telecoms; health and education; energy; water; sewage and solid waste; industry; urban infrastructure; and transport." The best aspect of this bonanza is that €13.3m is to go on telecoms here in Galicia. Is it too much to hope that some of this will finance a new exchange in my barrio so that we get the 6 mega internet we pay for but never get anywhere near? I fear not.

Intriguing to read that, once Spain increases it to 16, the only place in Europe where the age of consent will still 13 is the Vatican State. But are there any females in the Vatican? Or does this provision also apply to males? Implicitly if not explicitly.

Finally . . . And talking of investment in our barrio, this is what it looks like outside my front gate right now, as new gas pipes are being laid. 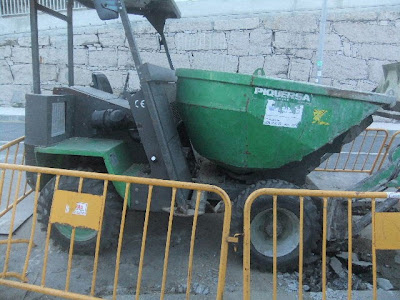 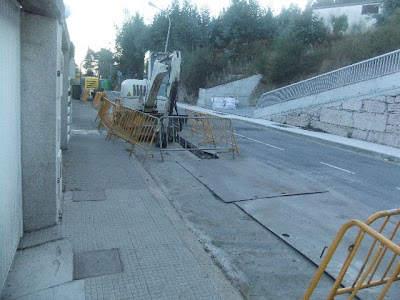 So, more dust and round-the-clock noise. This is at the initiative of the Presidenta of our community. I'd say a lot more about this if she wasn't my next-door neighbour, the lovely Ester.

Footnote: My internet speed right now is just 4% of what I'm charged for. In what other industry could you get away with this atrocious level of service?
Posted by Colin Davies at 11:34 am

It seems a tad ironical that the Catalans would want to secede from Spain and become a smaller entity when throughout Europe, countries are wanting to become part of a larger group or entity, the European Union. Mind you, who said that the majority of the Catalan people in fact want the change??

"In what other industry could you get away with this atrocious level of service?"

only a complete idiot can compare the Catalan distinctive identity and culture whithin Iberia with London's (instead of Englands)in the UK.