Poor old Ana Botella("Mrs Bottle"), the mayoress of Madrid who made such a hash of a speech in 'English' at last weekend's Olympics shindig in Buenos Aires. She's been mercilessly lampooned in the Spanish media all this week but was gracious enough to say she understood the Spanish sense of humour and that she often laughed at herself. But one wonders how funny she's found the state's official language schools (Escuelas Oficiales de Idiomas) citing her failings in their ads. Et tu, Brute. Anyway, I suspect she won't be standing for mayor next time round. Meanwhile, she's - understandably - announced that Madrid won't be submitting itself to another ritual humiliation via a bid for the 2024 Games.

HT to Lenox of Business over Tapas for this quotation from the blog 'El Espía en el Congreso':- President Zapatero had 17 female Ministers over the years and Carmen Chacón is the fifth to have fled Spain. The other 12 have become millionaires and hope not to be investigated into having to return their fortunes anytime in the future. However, they all have something in common. They all have something to hide: accusations of corruption, million-dollar subsidies or formal relationships with companies that later hired them on outrageous salaries, ideological differences notwithstanding . . . Confidant of their impunity, these twelve remain in Spain. It's at times like this that one can understand why neither major party is much interested in eradicating - or even reducing - corruption.

Which reminds me . . Given how dry it's been for 6 weeks now, it's not surprising we've had several large fires here in southern Galicia. As ever, there've been rumours that a goodly proportion of these were deliberate. But there was consternation - almost disbelief - when a woman was arrested and accused of starting a total of 13 fires. For women, of course, are not capable of the evils to which men are prone. Honest.

I don't know about Syria, Afghanistan et al, but we need this sort of thing in Pontevedra to scare the proverbial out of the pigeons. They'd surely be better than the fleet of phoney owls we now have. Of which this is the latest, snapped last night. 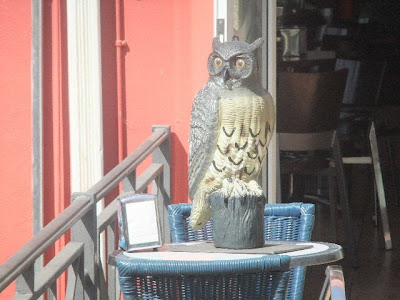 It's not often you turn into your street and find an 85 year-old woman lying in the road. But this is what happened on Friday evening when I was returning from town with my house guests. One of the latter, coming from the UK, thought it might be some sort of trap and urged caution. But I was less worried. And it turned out the lady had tripped over the curb when taking a bag to the communal rubbish bin. Once we'd lifted her up and guided her back to her gate, she professed herself fine. Her son is a poet, so I now wait to be immortalised in verse. Or at least thanked for not running over her.

Given that he was born in my barrio across the river, it's not surprising that Pontevedra boasts a statue of Crístobal Colón (Christopher Columbus). Sadly, this has lacked one of its hands for some time now. But this was not all bad news as it allowed me to amuse visitors with a joke about single-handed voyages across the Atlantic. Oh, how they groaned. But I digress. The council has finally decided to restore the missing piece, at a cost of €6,000. A handy amount, you'll surely agree. I can only assume they're using the services of the country's best surgeon. But I'll check with my friend who teaches stone and wood restoration in the nearby Fine Arts Institute.

Single-handed voyages: excellent. gave me a chuckle over breakfast.