Well, you look at Italy, where a 77 year old gigolo has just brought down the government singlehandedly and, like Groucho Marx, you're forced to ask whether you want to be a member of a club which has Italy as a member. Not to mention Bulgaria, Rumania, Serbia et al.

It'll be a long time yet before I fully understand the Spanish judicial system. It seems that anyone is allowed to say just about anything they like - "I think my daughter-in-law did it" - in respect of the recent murder of an 11 year old Galician girl. Indeed, the investigating judge appeared on yesterday's news programs, answering questions about the case. Unimaginable in the Anglo system.

Speaking of Spanish law . . . I mentioned the Public Prosecutor yesterday, raising a question about his/her real role. Bang in cue, said Fiscal has told the inquiring judge in the biggest corruption case of the moment - and that's saying a lot - to stop investigating illegal corporate donations to the PP governing party as this would be "inútil, impertinente y perjudicial." Or 'useless, impertinent and prejudicial'. I suspect there's a better translation than this, possibly from a Spanish reader who's a lawyer.

You mustn't run away with the idea that corruption here is confined to politicians and businessmen. Down in Andalucia the UGT union is accused of obtaining millions from both the regional and national governments by inflating invoices for reimbursement of their costs. Well, it is a game for any number of players. Where the rewards are high.

Has he no shame? The Spanish President, Sr Rajoy, stands in front of the UN and demands that Britain re-establish the dialogue on Gibraltar that his own government terminated a few months ago. Well, I guess he wouldn't be a politician if he couldn't do this sort of thing. Personally, I wouldn't like to be the person having to re-start talks with Motormouth Margallo, the Minister for Foreign Affairs. I'd feel very tempted to lean over the table and deck him.

Which reminds men . . . I'm not sure how true this is but, if it is, it'll be a major embarrassment to Spain - The Canary Islands government is reported to have applied to the UN for 'decolonisation' from Spain. It says that the islands are treated more like a colony than an autonomous region and they are fed up with sending €4-5bn to Madrid every year, even though 45-50% of their residents live below the poverty line. Something to keep an eye on.

Back here in Pontevedra, most streets in our old quarter have a previous name. For example Rúa Sarmiento used to be called Rúa de los Jesuitos, before the latter were booted out of Spain in the late 18th century. One of the more interesting name pairings is this one:- 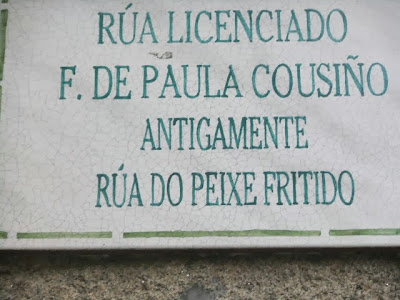 So, a street now named in honour of F de Paula Cousiño was once called Fried Fish Street. Bit of a change. 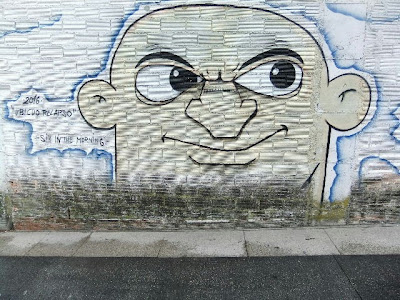 The accompanying text says: "Ubicuo relapso. Six in the morning". Your guess is as good as mine.

And this is another one beyond my understanding:- 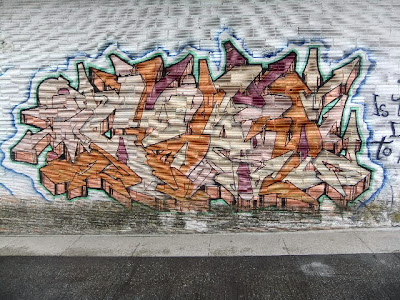 Finally, this one has the handsomely-written text: One thing you should know is that I have a friend who lives there. I know he wont refuse to put some color to my troubles and call 'em the crawler blues. A snatch of a song? 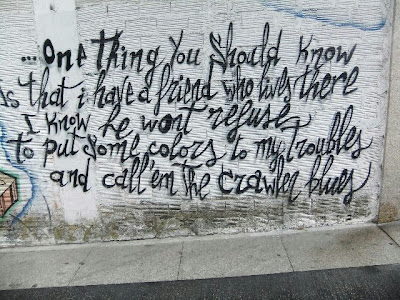 
Oh my dear Colin, you are such an ignoramus at times! F. de Paulo Cousiño was - up to some 40 years ago - a famous Pontevedra fishmonger, who in wintertime fried his own merchandise on the corner of the Rua Serra and the street now named after him. With mouthwatering yearning and culinary tears in my eyes, I remember his deep-fried sardines in cabbage leaves, and his splendid Cayenne Pepper Merluza... Small wonder that the street once called after his guild, is now called after this Carême of the Pontevedra fish market!

You wrote " I remember his deep-fried sardines in cabbage leaves, and his splendid Cayenne Pepper Merluza... "

More information please. Was the deep fryer coal fired? I remember with fondness such a facility upon the sand at Calafell Playa, selling huge bags of freshly, hand fried crisps sprinkled with sea salt. The aroma was wonderful.

So, were the sardines deboned & beheaded before being wrapped in cabbage leaves & were the leaves eaten? The Cayenne Pepper Merluza sounds scrumptious. Were the pieces dipped in cayenne seasoned batter before frying?

It may sound scrumptious but if anyone put cayenne pepper on the merluza, no Gallego would have eaten it. Possibly, pimentón dulce or, at a pinch, pimentón agridulce. But certainly not pimentón picante. He'd have gone bankrupt in a day.


Colin, you unbeliever! These were the days that Gallegos still had true c.j.n.s, and were hungry most of the time. Although I do admit that some clients tried to scrape it off the top of the Merluza-a-la-plancha (no batter anywhere Perry, only dipped into a plastic bag full of corn flour and seasalt just before frying).

As for Don Fernando's hardware: he actually used an adapted version of one of those coal burning locomotives that you may still see in the wintertime for roast chestnuts. A huge pan of linseed oil took the place of the chimney. The oil was never renewed, but often repleted. Don Fernando insisted that this lent that very special aroma to the sardines, which went into the oil entire, were taken out after 2 minutes, dumped onto a cabbage leaf which was then folded, newspaper style, around the 6 fish (or 7 if he liked you) (I always got 8...). Add salt, vinegar and chopped onion, and Bon Appétit!

Not to mention a chimera.

A chimera, Colin? Not as much as you’d think. Only from another age, which did not register, publish, and self-promote its accomplishments all the time. I’ve been working my a.. off trying to find a picture of Don Fernando at work (I have one somewhere), but all I manage to find is a shot from the 1955 funeral of Don Laureano Maria Muñoz, somewhere on the outskirts of town, in which we see Don Fernando’s ‘chestnut locomotive’ in the lower left corner. This I cannot publish here, so I will provisionally publish it on my own blog where you can see it.

Get it here, all ye who remember Don Fernando!!

Thank you for the information.