Having driven at least 3,000km over the Xmas and New Year period, I now wait (for at least a couple of months but maybe a lot more) to receive notices telling me what motoring offences I'm alleged to have committed. And this despite my very best efforts to stay within the law. My pessimism has been increased by the reports of a police sergeant who castigated his men for not issuing enough fines, labelling them 'Tight-fisted cry-babies'. Spain's traffic cops now have a salary/bonus system which motivates them to fine drivers, even (as I well know) without stopping them to acquaint them with the nature of their alleged offence. And, when it comes to their word against yours . . . .

Talking about squeezing the lemons until the pips squeak - after years of above-inflation increases, Spain's electricity is now the 3rd most expensive in the EU, after only Ireland and Cyprus. The government's explanation for the latest increase is that 'poor regulation' under the last government has led to 'huge deficits' (losses??) for the suppliers. On top of which someone has to pay for the subsidies to renewable sources. This doesn't sound entirely convincing but I fear we won't get anything better. Or a halt in the relentless increases. As in other industries, there are effective monopolies all around Spain.

Which reminds me . . . I read that rural users in the UK had just been given 'super-fast' broadband. I live on the edge of Pontevedra city and I've been waiting 13 years for something better than 1 mega. So, 'fast' would be perfectly acceptable to me, never mind 'super-fast'. You can imagine my feelings, then, when reading that BT provides this for c. 10 euros a month, against 35 euros for my pathetic service. Which Telefónica-Movistar clearly has no intention of doing anything about. Another effective monopoly.

I enjoy watching a BBC TV program on Sunday mornings which brings together people of different faiths, as well as apostates and even atheists. Nothing is ever agreed but it's amusing watching people swap their respective certainties. Yesterday, there were several young Islamic women - some in just scarves (hijabs), some in niqabs but none in burqas. One of those in a niqab said her wearing it was an act of 'worship and modesty', for which she would be rewarded in heaven. And she offered the argument that separating men and women in meetings, lectures, etc. was not really 'segregation'. "It is" she said "merely seating arrangements in the Islamic tradition". Given that she was clearly intelligent, this left me wondering - not for the first time, of course - about the power of indoctrination.

More seriously, for an insight into the radicalisation of young Muslim men in the UK click here for a talk by a young Muslim woman on this

Finally . . . Flicking through images of the niqab, I came across this cartoon. Which seems to reflect the attitude of the young woman on TV:- 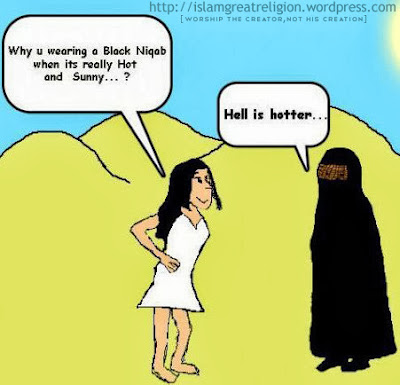