In the Spanish parliament the country's representatives regularly do a good impression of sheep - for example in respect of the recent secret vote on the Abortion Bill. Over in Turkey though, their oppos recently came to blows over the issue of government control over the judges. That's how to do it! Even Russell Brand might approve

Not a good week for the Scottish Nationalists. First, the British government told them they couldn't have either the pound or a currency union, if they go independent. Then, yesterday, the EU President confirmed they'd have to formally apply to join the EU, for which they'd have to get unanimous acceptance from 26 other members, plus an antipathetic Spain. This, he felt, would be very difficult, if not impossible. The reaction of the Scottish Nats was fourfold: 1. Accusing the British government of bullying; 2. Insulting the EU President by saying he was speaking rubbish; 3. Distorting the comments of the Spanish Foreign Minister about the November referendum; and 4. Insisting they could join the EU immediately as all its rules were observed in Scotland - a justification which falls within the category of True But Irrelevant. All in all, the signs are their dream is coming apart at the seams. So it'll be interesting to see how they fight back. As the pugnacious Mr Salmond surely will. One thing is certain - there'll be more accusations of bullying and possibly UK-EU collusion. Nationalists are always defined by victimisation. But vamos a ver. No doubt they'll be watching in Cataluña.

I had another excellent wild boar lunch on Saturday, courtesy of my good friend Fran and his Porcos Bravos colleagues. At one point a well-known female beggar came in and I told Fran I didn't know he'd invited his sister. He looked at me askance and in an aggrieved tone said this was rather insulting. I answered that it was a good thing, then, I hadn't uttered my first thought, viz. that his mother had arrived. Fran now looked decidedly hurt and unamused and I was reminded that Scouse humour doesn't always go down well in Galicia. Or possibly elsewhere.

Candidates for cost savings in Spain: Spain's 17 regions ("Autonomous Communities") have 149 pseudo-embassies in major cities around the world. I wonder how many the British counties have. A quick look at the Wiki entry for Merseyside suggests none there. But they must have at least one, in Brussells. Where the gravy train sets out from.

Galicia's big corruption case (Pokemón) has thrown up that politicians, civil servants and police officers had 'dozens' of friends and relatives given jobs in companies appointed to carry out contracts for public authorities. Which will surprise no one, as nepotism and croneyism are Spain's gift to the world. Or South America at least. That said, Spanish friends assure me it's not as bad as 30 years ago, when no one could get a job without a personal connection (enchufe).

I sometimes have a problem distinguishing between the male and female figures on toilet doors. Most noticeably - and embarrassingly - on our recent visit to Sevilla. I mention this because in the bar where we enjoyed our wild boar (The Cheshire Cat) the doors are signed - OS and - AS. What I don't know - but Fran will tell me - is whether these are the Spanish male and female plural suffixes or the Galician male and female definite articles. Or, cleverly, both. Either way, it's hard to go through the female door in error. Or harder than in one café in Sevilla, at least.

Finally . . .  My daughter sent me this cartoon yesterday and I felt it worth sharing. It's an example of Irritable Owl Syndrome . . . . 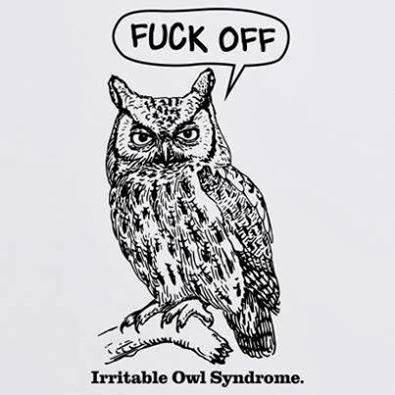