There's something of a tawdry spat taking place between the prime ministers of Greece and Spain. This is because the former has to save his country and the latter has to save his skin in an upcoming election. The PM of Greece has accused Spain's PM of taking a tough line in the bail-out negotiations solely for his own personal electoral reasons - he wants to ensure the new Greek government doesn't succeed as this will breathe winds into the sails of our new Podemos party, currently riding high in the polls. The problem with his analysis is that it's true. Hence Sr Rajoy's fury and his allegation that Mr Tsipras's statements have been made for purely domestic political reasons. Pot and kettle, in other words. Mrs Merkel, of course, has stepped in to issue the worst condemnation that can be made in Britain - that what the Greek PM did simply "wasn't done". So, the stresses of the euro are compelling member states to break the unwritten law that no leader talks disrespectfully of another. Except for France and Britain. Anyway, Mr Rajoy has accused Mr Tsipras of indulging in abuse. And, if you watched the former's State of the Nation speech last week, you'll know that this just isn't done in Spain. As if. It's what the country - and its language - specialises in.


France is, of course, an exception to every EU rule. For the nth time, it's just been let off the sanction for breaking the fundamental budget deficit rule. Which is only for small members, it seems. As it were.

In the times of the Fat Cows, Galicia used to have its own 8 page section in Sunday's El País. And doubtless this was replicated around the country in other regions. Yesterday, it reached almost rock bottom, at 1.5 pages simply inserted in the text of the main paper. Sic transit gloria mundi.

Which reminds me - despite forecasts of an imminent upturn in the property market (at least for those who deal with foreigners) - last week saw the death of the country's largest firm of estate agents, Martinsa-Fadesa. Which was founded and originally based in La Coruña, here in Galicia. But it's been so much harder to make money since people stopped throwing it at you, way back in late 2007.

Astonishingly, ISIS (or ISIL or DESH) publish a glossy internet mag boasting of its aims and achievements. It's called Dabiq and can be seen here. Not something you'd want your teenage kids to be reading. Especially if they're Muslim. But how do you stop them? Even intelligent, well-edcuated 15 year old girls are susceptible to this stuff.

If you go to Google Images and put in 'pictures of balthus', one will be the one I saw in El País yesterday - Therese Dreaming. And another will be one they didn't dare show - Guitar Lesson. Looking at them - plus others - I wondered whether my shocked reaction was rational or born of the relentless focus on (potential) pedophiles in the UK. I certainly don't think even the picture entitled The Guardian would ever be printed there. Even, ironically, in the The Guardian. All that said, some of his pictures are 'quite nice'. Notwithstanding his apparent obsession with raising the left leg of his subjects.

According to a new study, drinking coffee on a regular basis could reduce the risk of heart attack. "Scientists have found that people who drink between three and five cups daily are least likely to develop the clogged arteries that can cause heart problems". So, if you're minimising your coffee drinking for blood pressure reasons, what on earth do you do now that we're being told that as many as 5 cups a day are good for your heart? Me, I'm sticking to 2 and giving up scientists, as being harmful to my sanity.

Just for the record, here's what our old-style, small zebra-crossing signs look like. Hard to notice, especially if you're concentrating on the road. 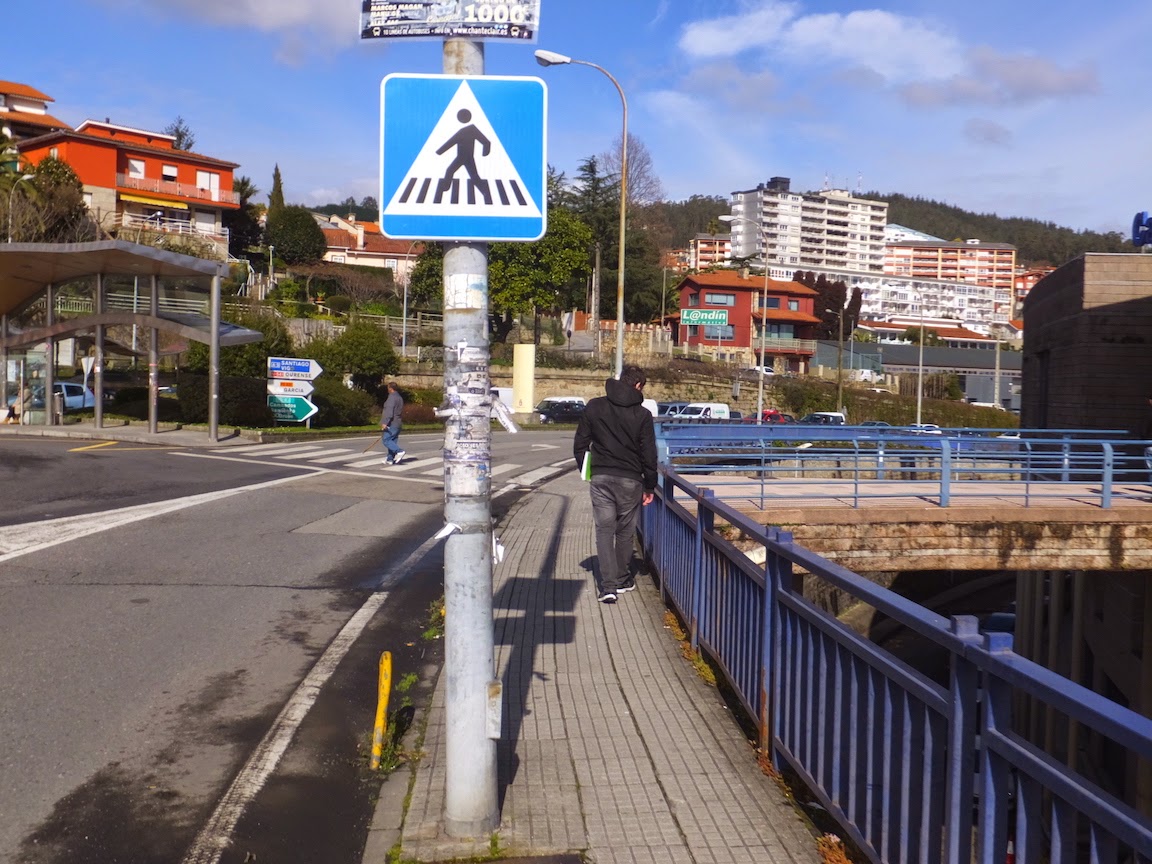 Finally . . .  I don't suppose anyone needs - or even just wants - to see our Atlantic Blanket but here it is, in its milder form. When it's on form, I can't see any of the city from my window. Or even the trees. And, after 4 long days of it, I can understand why sailors marooned in similar conditions go mad. 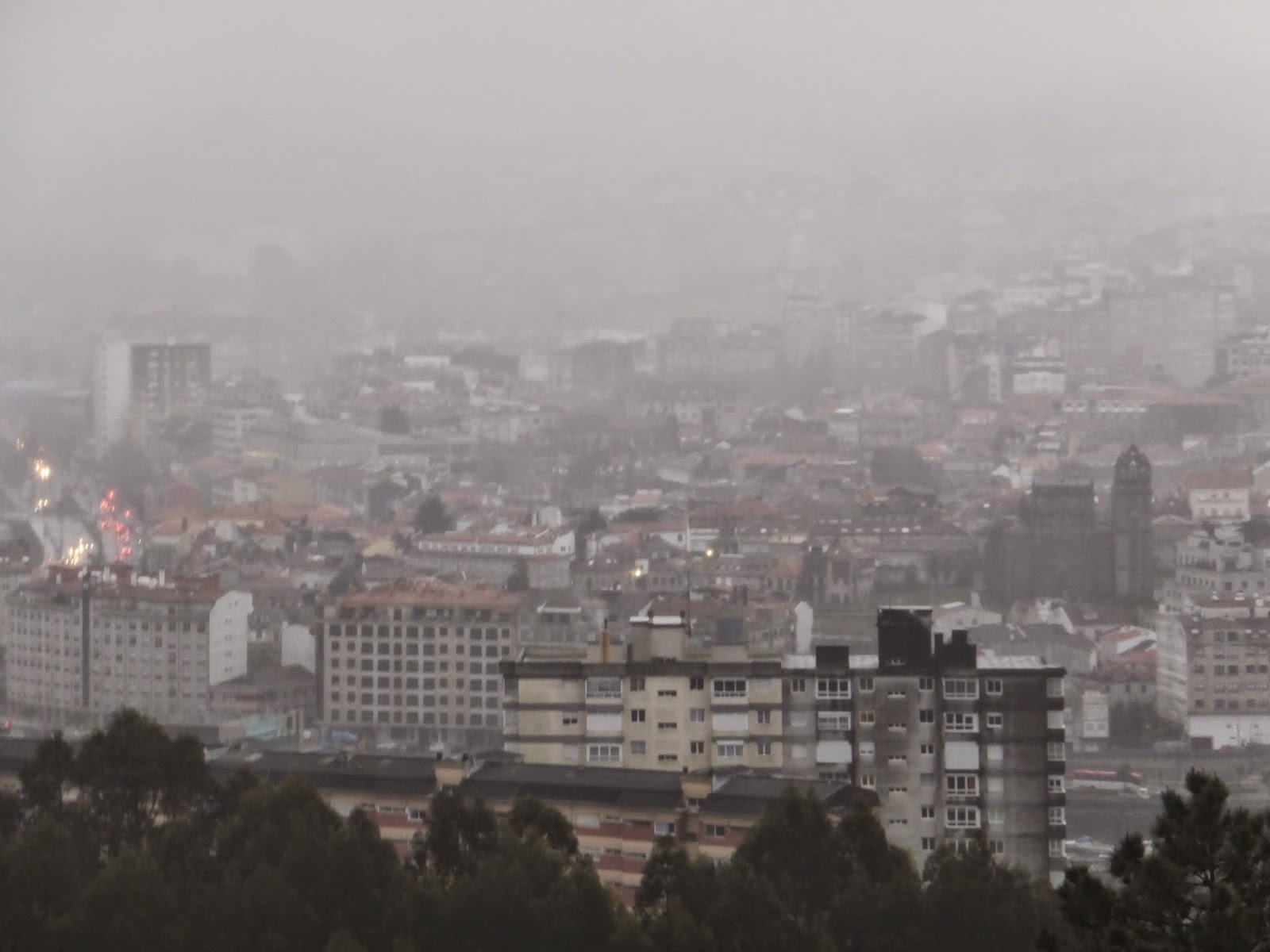