Healthy Spain: It's been confirmed that Spain is one of Europe's healthiest countries, with a life expectancy now of 81.4 years, 70.9 of which are spent in 'full health'. Only Switzerland in Europe and Japan do better. Reasons cited include a Spanish psyche which includes more walking and sports (thanks to the weather), as well as home cooking and a healthy diet, even when eating out. I'm a bit surprised by the last factor as restaurant meals in Spain aren't big on vegetables. Though there's always a salad. Irrelevantly for me as I hate the stuff. Unless it's rocket doused in a spicy sauce. Finally on this: One curious aspect of Spain's high life expectancy is that those who are now in their 60s, 70s and 80s were born during some of the least-healthy years in the country's history – between the 1930s and 1950s, when they would have grown up at the height of the wartime and post-war famine which persisted for much of the Franco dictatorship; a factor which suggests Spaniards born in later decades may fare even better on the health and longevity front.

Iran's Elections: You may have seen that the moderates made significant gains in these. Of course, when you contemplate the public execution numbers I cited the other day, you realise that 'moderate' is a very relative term. One day the evil religious madness will be over and Iran will once again be a wonderful place to visit. It's not bad even now, if you can keep your mouth shut. And your head on.

Henry Tonks (1862–1937): I saw somewhere a laudatory reference to this chap. He was a British painter of figure subjects, chiefly interiors, and a caricaturist. He became an influential art teacher. He was one of the first British artists to be influenced by the French Impressionists and was an associate of many of the more progressive artists of late Victorian Britain, including James McNeill Whistler, Walter Sickert, John Singer Sargent and George Clausen. Type 'henry tonks pictures' in Google Images if you want to see some of his output. But, be warned: he was also a surgeon!

Las Fallas: If you don't know what these are, click here. I cite them because I've just realised I'll be able to see them, for the first time, when I'm down in Jávea mid March. BTW . . . Flying to Valencia for this would trip would cost me at least 4 times as much as flying to Alicante, on the other side of Jávea on the east coast.

Finally . . . . A new English word? Slebdom. People famous for being famous. In Spain the classic example is the ex girlfriend of some bullfighter, Belén Esteban, who's impossible to ignore as she seems to appear on every TV program that I'm forced to view. 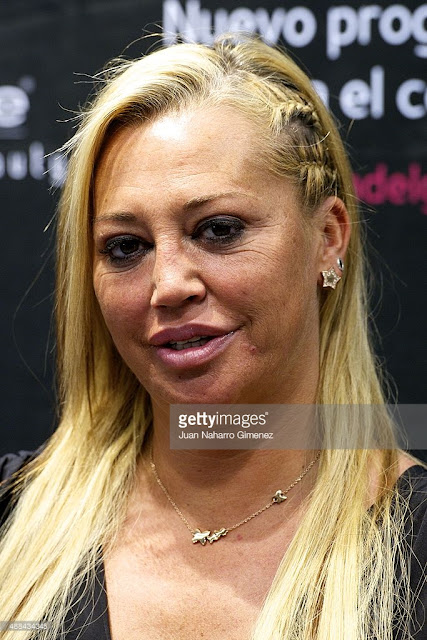 It beats me, as she gets uglier and more stupid by the day. And perhaps ever more outlandish. Presumably the Spanish like this. Hugely. Despite (because of?) being useless and pugnacious, she won the Spanish version of Celebrity Come Dancing. Say no more. Click here for more fotos. Sadly, she was once quite pretty. Especially before her misbegotten plastic surgery. BTW . . . I recently bumped into her outside a hospital in northern Madrid. We ignored each other. Even though we share a birthday. Her loss, of course.

Blognote: Readership of this blog averages around 450 a day. Recently, though, this has rocketed to over 800. I suspect this is due to be posting my efforts on the Facebook page of the lovely people of Os Porcos Bravos. If so, Graciñas, amigos. BTW . . . They kindly gave me an award last year. Then photoshopped my image into the ceremony pix, after I unforgivably forgot to turn up. What gents!

The Old Old Labour party used to seriously dislike the EU/EEC. And it voted against the UK joining in 1976. But now the New Old Labour party rejects the Brexit and hopes its supporters will ensure it doesn't happen. No one knows what Jeremy Corbyn and his lieutenants think, but there's nothing knew in that. JC, in fact, has continued to oppose the EU for the last 40 years. So, fun times ahead.

Another Outer, in The Times:

It’s good to see the chancellor doing his bit for British exports by talking down the pound. That, at least, is the only creditable explanation for George Osborne’s warning on Friday that British exit from the European Union would be an “enormous economic gamble” and would cause “a profound economic shock for our country”.

The less appealing explanation is that the chancellor is so desperate to discourage Britons from voting “leave” in the June 23 referendum on our membership, he is prepared to behave like the fat boy in The Pickwick Papers (“I wants to make your flesh creep”). This technique of Conservative ministers supporting the “remain” campaign has been called “Project Fear”.

A further example of the lurid language employed by its promoters was supplied on Thursday night by the environment secretary, Liz Truss, who told the viewers of BBC’s Question Time that if this country voted to leave the EU, we would be entering “the Twilight Zone”.

We’ve got four more months before the vote. To what level of rhetorical scaremongering will the “remainians” sink when we get properly close to the moment of decision? “Abandon all hope, ye who Brexit here”?

This doesn’t mean their strategy is misguided. When you are arguing for the status quo, it is normal to warn about the “unknown” events that a vote for “change” might bring. Hence the prime minister’s incantation that leaving the EU would be “a leap in the dark”. More particularly, he has expressed this uncertainty in financial terms, knowing the British voters generally have economic security at the top of their lists of concerns.

The relevance of this could be seen in the results of a ComRes poll published last week. It showed that about twice as many thought we would be economically worse off if we left the EU as thought our economy would improve. If that balance of opinion continued to the end of the campaign, I see very little prospect of a majority voting “leave” on June 23, even though the issue of uncontrolled migration from the EU will prompt millions to support Brexit.

Yet here’s the thing. Despite all the corporate endorsements of Project Fear (with about a third of the bosses of FTSE 100 companies dutifully agreeing to put their names to a screed dictated by No 10), disinterested think tanks and economists have tended to coalesce around the view that, economically, the pluses and minuses for the UK — between staying in or leaving the EU — will balance out.

For many years, those arguing that we should remain in the EU have cited the figure of 3m as the number of jobs that could be “lost” as a result of “leaving the single market”. Oddly, this round number has never varied, whatever the state of our own economy or of that of any of the other 27 members.
Three years ago Channel 4 News’s FactCheck dug into the origins of this and discovered that it “appears to originate from an influential piece of academic research carried out in 2000 . . . by Professor Iain Begg, now of the London School of Economics”.

When Channel 4 News took the trouble to speak to Begg, it discovered that “while [he] stands by his research, he takes great exception to headlines that suggest that millions of Britons would be thrown on the dole if Britain left the single market . . . According to the people who did the research, talk of mass redundancies [after an EU exit] is just scaremongering.”

Begg himself added that if anyone tried “completely objectively” to work out the pros and cons of Brexit, “you would probably find that the economic plus or minus is very small”. This is backed up by Wolfgang Münchau, for many years the FT’s European economics columnist. He observes: “There may be reasons why the UK may wish to remain a member of the EU. But whatever they are, they are not economic.”

But if you really want to understand why Brexit is more an economic opportunity than a deathly curse, it’s necessary to read Myth and Paradox of the Single Market, by Michael Burrage, published last month by Civitas.
Burrage, a former lecturer at the London School of Economics specialising in comparative analysis of industrial enterprise, has, by the most direct statistical means, refuted some of the cherished Whitehall assumptions underlying the debate about British membership of the EU.

Using publicly available official trade figures, he reveals that whereas, in the years of Britain’s membership of the Common Market, 1973-93, our exports to the rest of the organisation’s members increased by much more than those of leading non-members (such as the USA, Canada and Australia), since the inauguration of the single market in 1993, those countries’ exports to the EU have grown more rapidly than ours.

Indeed, by 2011, for the first time since 1972, the value of US goods exported to the EU exceeded that of UK goods. This destroys the absurd argument that it is necessary to be part of the single market to sell profitably into it — or that an exporting country must agree to an open border for EU citizens.

I asked Burrage why it is that mature English-speaking democracies outside the single market such as America, Canada and Australia have seen their exports to it grow at a faster rate than the UK has, with our supposedly privileged position inside, while that was not the case during the Common Market era.

His best guess was that this paradox is attributable to the work of the World Trade Organisation in bringing down tariffs worldwide. During the Common Market years, tariffs walls were high, so non-members of the community were at a significant disadvantage when selling to it. But now that the EU’s average weighted tariff on goods from outside the single market is 3%-4%, it is almost insignificant compared with, for example, standard currency fluctuations. This might help explain why US exports of bourbon to the EU have during the past 22 years grown by more than 10 times the rate achieved by scotch whisky firms, despite all the alleged advantages of being within the single market.

Of course, the UK post Brexit could also negotiate bespoke free-trade deals, not just with the EU but with other countries — something we are forbidden to do as an EU member.

On Friday’s Today programme, the former EU trade commissioner Lord Mandelson sneered: “We would be free to negotiate, but who’s going to want to negotiate with us?”— an echo of his earlier claim that “India would laugh in our faces if Britain tried to negotiate a free-trade agreement outside Europe. They would walk away and leave us whistling in the wind.” As Burrage observes, “He declined to explain why India did not leave Singapore or Chile ‘whistling in the wind’.”

Mandelson’s mocking the significance of the world’s fifth-largest economy — this country — is all part of Project Fear: it is casting unwarranted doubt on the capability and attractions of Britain’s businesses and workforces. What should cause national shame is that the most assiduous practitioners of this message are Britain’s own prime minister and chancellor.