Practical Advice for the Camino Primitivo

The first time I drafted this post it was on my phone in Word. Which doesn't appear to have an automatic Save function. Worse, you seem to be able to exit without being told you haven't saved your draft. Which, I have to admit, I'd discovered previously. So, from memory . .

If you're reading this because you're contemplating doing the Primitivo camino, please first read my post of April 26, in which I suggest this should only be done in rather narrow circumstances. Now on to the advice:
Finally . . . Enjoy it. There are spectacular views at every height, ranging from (steep!) green meadows to snowy peaks. Starting early can give you lovely cloud views. To be distinguished from fog.

I do hope this advice helps you achieve the goal of enjoyment. Not to mention achievement. 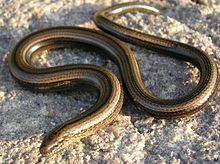 Not actually a snake but a legless lizard. Also called a slow worm. You can tell by the eye-lids.
at April 30, 2016