LGBT RIGHTS. I'm not sure what these are in their entirety but I was impressed to read that, in their regard, 'Catholic' Spain ranks 5th in Europe. After Malta, Belgium, the UK and Denmark.

The EU economy: The Eurozone recovery is wilting as the sugar rush fades and deflation lurks, says our old friend, Ambrose Evans-Prichard. The eurozone’s short-lived recovery is already losing steam as stimulus fades and deep problems resurface, raising fears of yet another false dawn and a potential deflation trap if there is any external shock over coming months. Markets are beginning to lose faith that the European Central Bank can deliver stimulus, and we are seeing the return of problems in public finances in Portugal, Spain, and Italy. More here.

A Brexit: The always readable and provocative Don Quijones points the finger here at those who are most afraid of this - the financiers who will suffer most. And who are, naturally, prominent in Project Fear, aimed at telling all other Brits how bad for them a Brexit would be. Quel surprise!

Things Impossible: I cited Alice in Wonderland yesterday. As you'll recall, the White Queen observed that sometimes she’s believed as many as 6 impossible things before breakfast. One politial observer writes that Many things previously thought impossible have already happened since the start of the financial crisis nearly ten years ago. The point is that logically more impossible things are on the way. Small wonder that a recent survey of UK chief financial officers revealed  business uncertainty to be at near record levels. Here's 6 of them:
Details here.

Aphorisms: I had my midday tiffin yesterday with a close Galician friend - as a 'good' nationalist, he'd kill me if I wrote 'Spanish' - and he made a couple of amusing observations based on local beliefs/myths: Britain is a Galician colony which turned out well. France is one which didn't. He also amused me with his version of an old belief of mine: We're all the sum of our contradictions. The good news is that he promised to protect me at the next AngloGalician wild boar lunch from the 'bad' nationalists who resent my lack of interest in fluency in Gallego/Galego.

Galician White Wines: We have 3 of these: Albariño, Ribeiro and Godello. I've been singing the praises of the last of these for several years now. So I was pleased to read that the wine buff Robert Parker has gone overboard for a godello wine fromValdeorras. Click here. Louro costs €12.54 here. Reduced, says the web page, from - err . . .€12.54. Must try a bottle, even if it's pricey for a Godello. 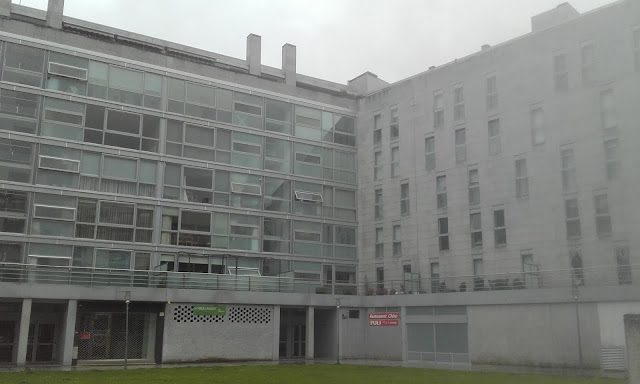 Perhaps unfairly, this grey-toned barrio always reminds me of my first visit to East Berlin, not long after the Wall had come down. It doesn't help that most of the shops are not occupied and so are bricked up.

Finally . . . A year or three back, I created an email account for people I suspected would send me stuff I didn't want. And I came up with Dross Bin as my name, all other obvious options having been taken. Yesterday, I got a suggestion from Google+ that I include Dross Bin in my Friends group . . . Computers, it seems, lack a sense of humour.

NOTE: I promised to send a recent (Dutch?) pilgrim all my fotos of the (some think) wonderful graffiti around Pontevedra city. Could he or she write to me at, of course, drossbin@gmail.com so that I can send them. And anyone else who's interested in seeing these.
at May 12, 2016