Thoughts from the Coastal Camino

Well, we covered about 47km today, from Santander to the 'most beautiful village in Spain' - Santillana del Mar. But the first 25 or so we did by a FEVE train, missing out the city's grotty suburbs. And all the empty and decaying developments built speculatively during the phony construction boom that peaked in 2008. Of which this is just one example. Trust me, there are worse:- 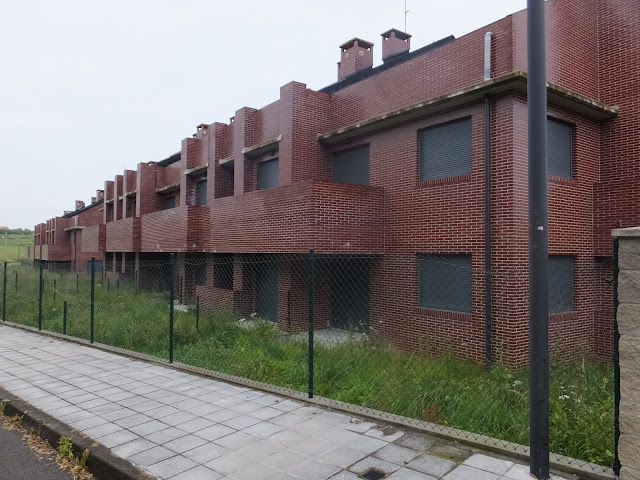 Alighting from the train in Mogro, we consulted our maps and guide books. At length. There was a long and a short option for getting to the next town but, for one reason and another, we managed to take an uncited third one, arriving at the town ahead of a German couple who'd got off the train with us and gone on ahead on the shorter route. Decked out like professional walkers, they looked proper miffed when they caught up with us in a bar. How we laughed. Internally.


Not far out of Mogro I noticed we were regularly stepping over snails which were all making their individual way from the hedge to the road. I concluded they thought they were lemmings, bent on mass suicide. Can anyone come up with a better explanation?

This we took for some sort of bus-stop: 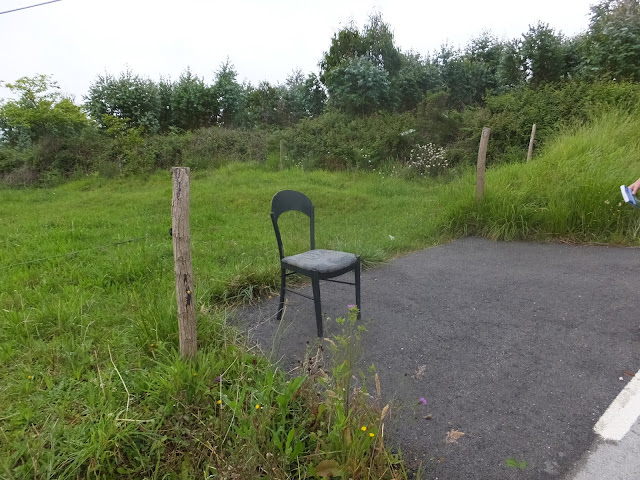 There were quite a few of these odd constructions but we arrived at no firm conclusion as to what they mght be. Anyone? 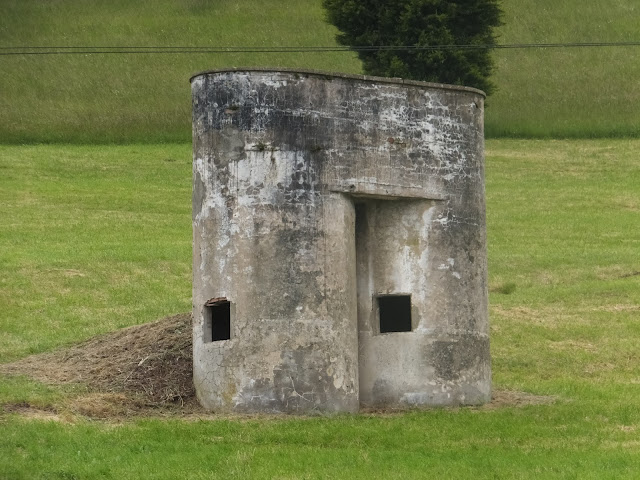 Getting close to Santilla del Mar, we smiled at a couple of recenly born donkey foals in a field: 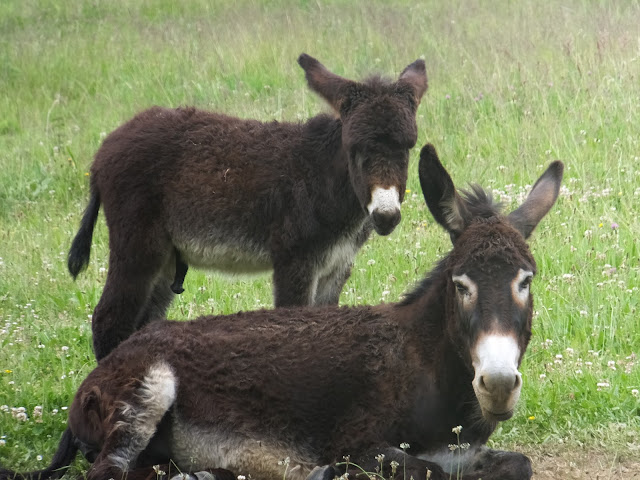 Shortly afterwards we mis-read the Google map and effected a massive circle back to where we'd gone off the highway. But this did allow us to enjoy the donkeys again.

Santillana lies in an area made prosperous by the tourism which really only started 20 years ago. On the way into the town, there's scarcely a house which doesn't offer some class of accommodation or the other. And in the town itself, none at all. Here's a few examples of the local architecture: 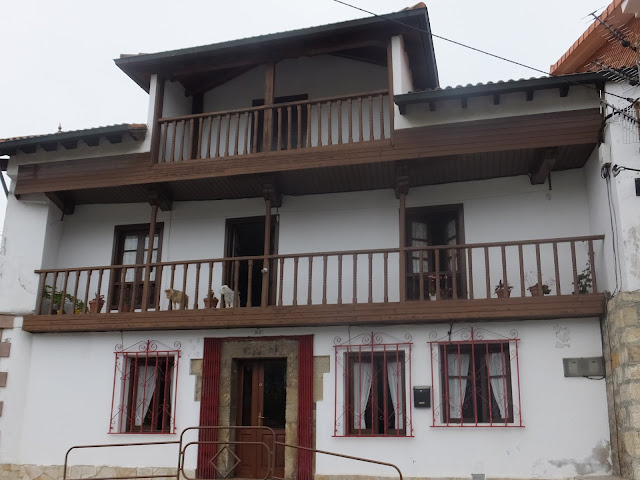 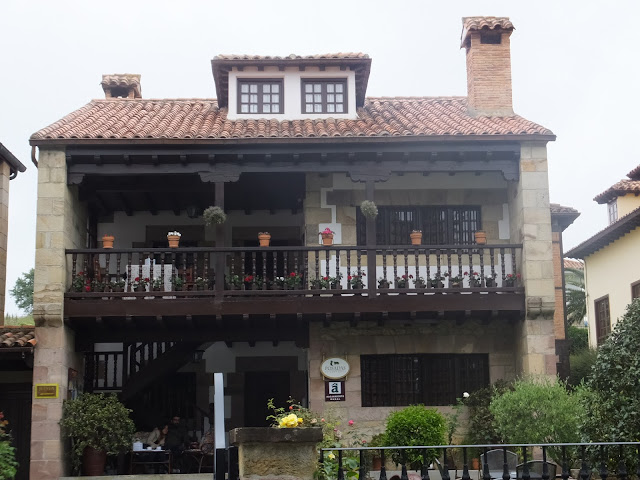 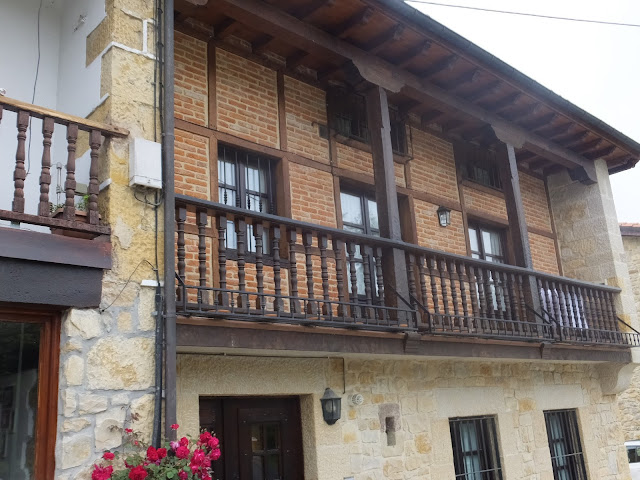 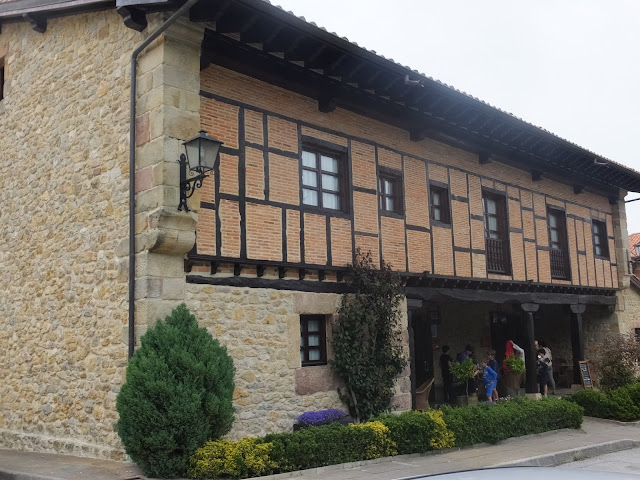 This is an escudo even finer than the best of Pontevedra's: 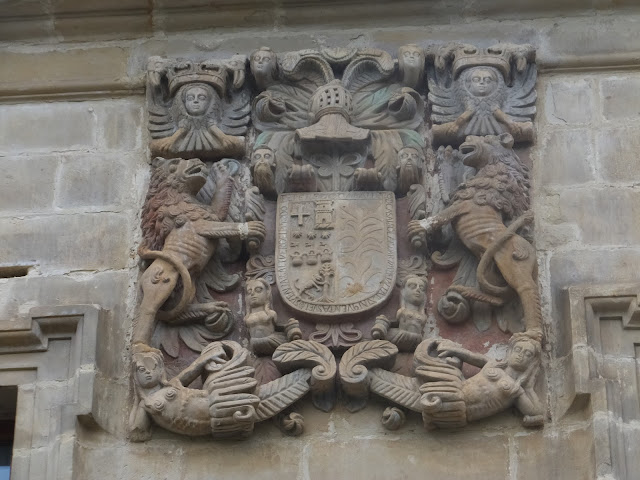 And here's a few examples from the truly gruesome Torture Museum, which is full of testaments to man's ingenuity. We didn't bother to try to get to see the replicas of the Altamira prehistoric paintings in the the Cave Museum. Another day: 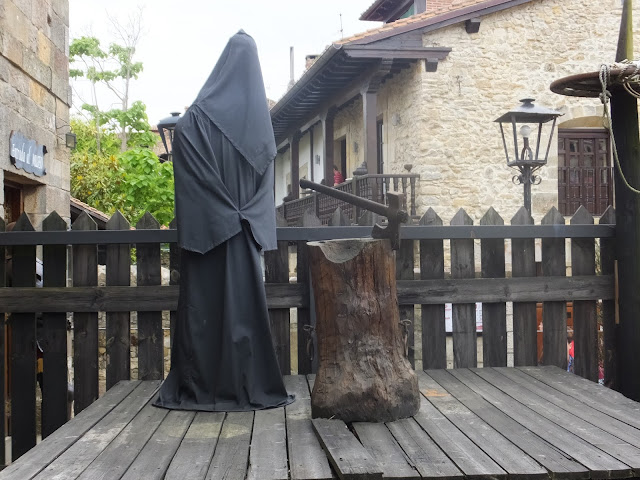 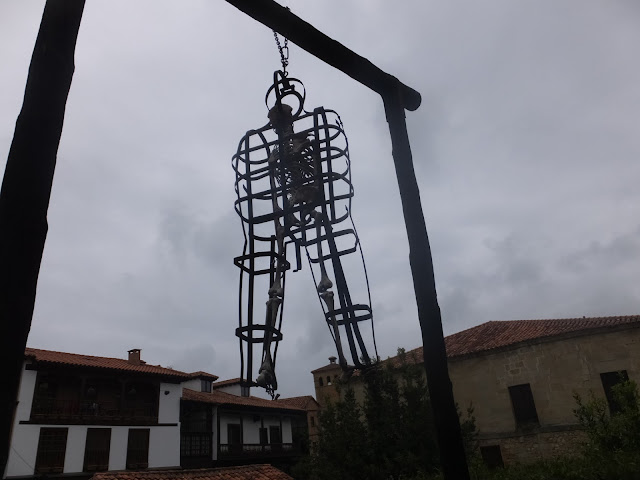 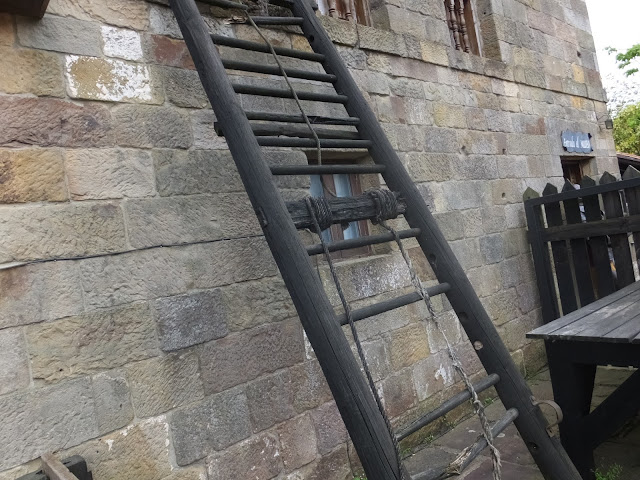 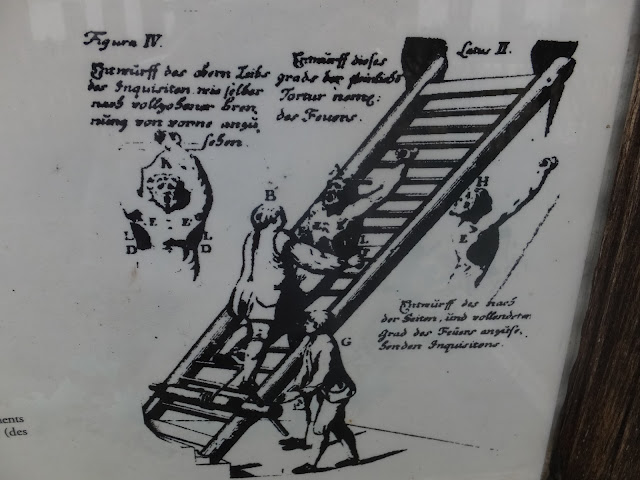 This, of course, is a guillotine - a replica of possibly the very one on which Dr Guillotine himself lost his head: Note there was nothing to prevent chldren playing on it. So one hopes the blade is fixed in place. And the ropes are hard to untie. 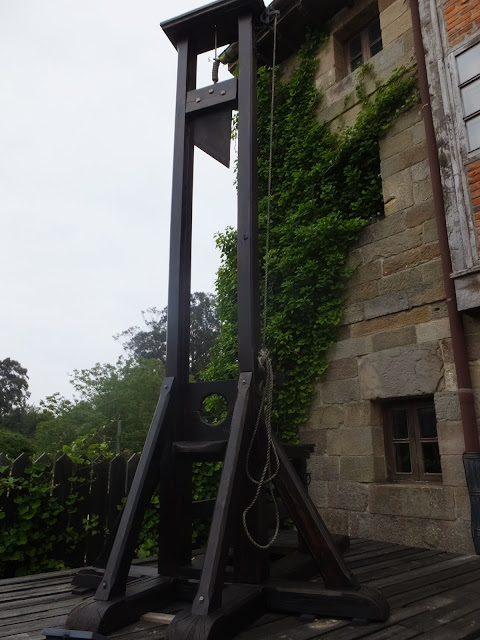 Equally, one hopes that visitors take stock of the instruction not to touch this (working) example of a limb remover: 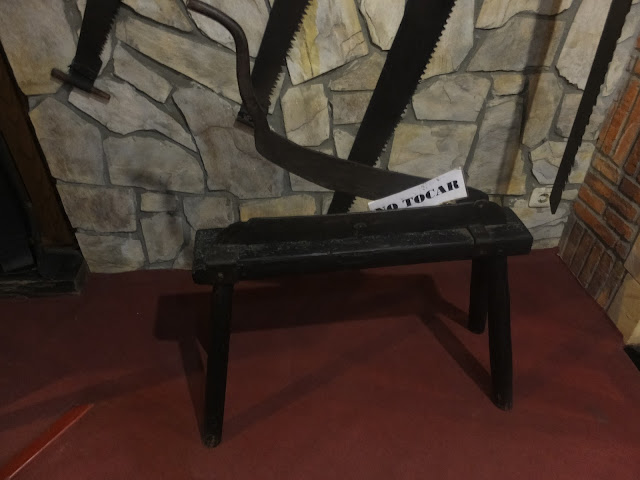 This is a finger-crushing implement, usually applied to the hands of those felt to be too noisy. I believe that, at one time, 73% of the Spanish population were in one of these . . . .: 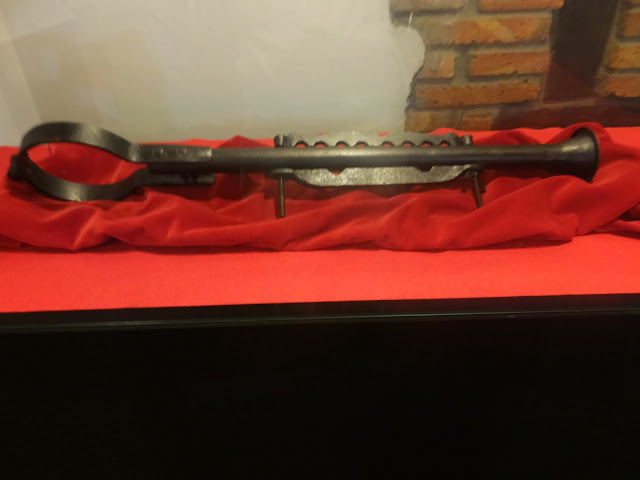 This is a paragraph out things that were used both for torture and, by Catholics, for mortification of the flesh. One of these is an 'air shirt'. Which doesn't sound too bad to me.

Finally . . . On, first, the wrong way and, then, the right way to our hotel last night, I passed some sort of car show but couldn't see exactly what what going on. A little later I saw two souped-up cars passing through a longish tunnel with a pedestrian way on both sides. Since it was impossible to believe there was any sort of road race taking place among the evening traffic, I assumed from the evidence of my own ears that the competition was to see which car could make the most noise going through this tunnel.

Finally, finally . . . I've just seen that Google + has 'enhanced' this foto of one of the foals. Which appears to have enhanced something of his own . . . . 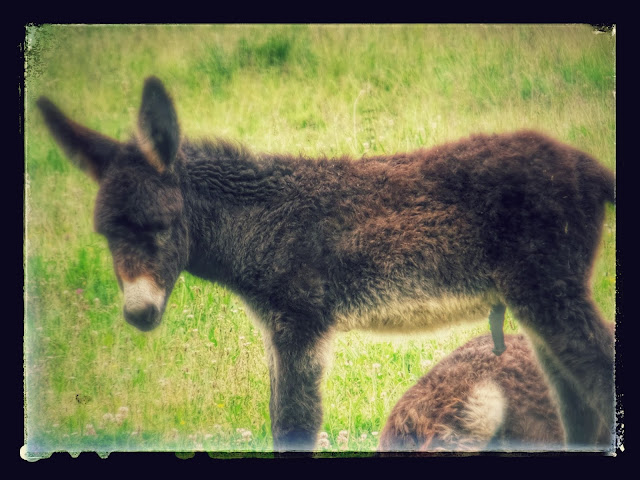