Reason for late post: I had a successful BBQ in my house last night but some drunk old fool - me - tripped over some cables and broke the optical fibre. So, no blog post until I go downtown at midday . . . Apart from this one, of course.

A British Nightmare in Spain: HT to my friend Dwight for this article from El Confidential on an entire village/town which is illegal. Spanish required but I will cite any article on it from The Local.

Bullfighting: For the first time in 30 years or more, the result of a corrida in Teruel last night was Toreadors 5: Bulls 1. A young bullfighter was gored through the chest and didn't survive. The fatal event was, of course, shown on Spanish TV – probably a hundred times – but will never be shown on British TV. But, if you want to see it, a couple of seconds on the internet will suffice to get to the videos provided by Spanish newspapers. Come to think of it, the guilty bull was surely killed; so the bizarre result was really 6:1.

Protests: There was a cavalcade of horn-blowing trucks in Ponters this morning, supported by police outriders. But there was a statue of a saint of the (alleged) Virgin on the back of the first flatbed truck. So it might not have been the protest I thought it was.

San Benito: Tomorrow is the feast day of this patron saint of the nearby village of Lerez, which
has a monastery of a massively disproportionate size. People put containers of olive oil next to his statue and then walk through a short tunnel underneath the latter - in the belief this will cure skin diseases. Making me wonder what century we're in.

The EU and Trade: A second HT to Dwight for this very good article from the economist, Joseph Stiglitz.

Nauseating Ads: Don't you just hate ad lines like this one for un upmarket British supermarket: Friendship – Morrisons makes it.

Finally  . . . Women: My sister and my niece did a wonderful job on Friday and Saturday cooking and helping me prepare for last night's BBQ. But this short conversation will illustrate why I will never understand (some) women:
Sister: Right, I'll just mop the kitchen floor.
Me: Why?
Sister: Because people are about to arrive.
Me: Within an hour the floor will be a complete bloody mess. Please leave it.
Sister: OK, if you insist. By the way, you need another bottle of washing up liquid.

The bloody old fool, looking suitably red in the face: 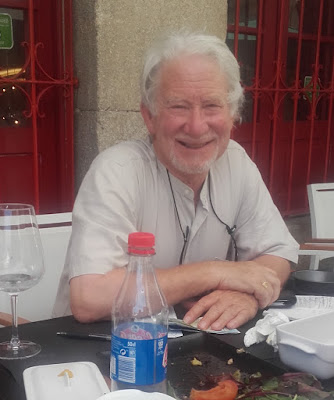