That Endless Spanish Deficit: Some bigwigs in Brussels - the nasty German ones - think it's high time Spain was punished for its relentless fiscal profligacy. But it ain't going to happen. EU rules are to be bent or ignored. Unless you're a small member. Greece, for example.

EU Rules: Here's Don Quijones on an even better example of Brussels bending over backwards to break or ignore its own rules. This time in respect of bank bail-ins in Italy.

Spanish Kids: Thanks - in part - to La Crisis, 80% of 20-somethings here are still living with their folks. Though the UK might well be approaching this level now. More on this here.

Spanish Good News: The (inaccurate?) number of unemployed continues to fall and might well be below '20%' now. But this is to say nothing of the (poor) quality of new jobs. See here on this.

The Spanish are Really [East]Indians, not Arabs: The writer of this article thinks these 2 peoples share some key characteristics, making him feel very much at home. These are:-
But the food isn't hot/spicey enough for him. Nor me.

Worried British Residents: Giles Trimlett has initiated a petition to the Spanish government aimed at getting dual nationality for those of us who've been here more than 10 years. Access it here. And then sign it, please

Brexit: For a wonderful Australian explanation of this, see the end of ths post.

Finally . . . Spanish Ambiguity: Just in time for summer visitors, the Pontevedra council has designated all previous free parking spaces in or near the city centre 15 minute spots. With this - or a similar sign - next to them: 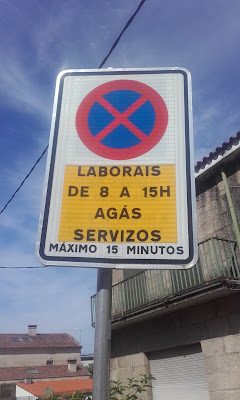 In the worst cases, you can't park there until 9pm. As you can see, the signs are in Galician only. which will - accidentally? - confuse folk from elsewhere in Spain.

And this is the result - long stretches of road near the city centre where the designated parking spaces are no use to any driver. 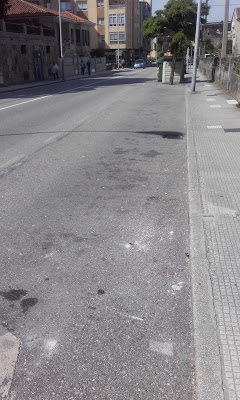 Just after taking these fotos I was confronted by a chap on a bike on the pavement. In full gear, of course. As he'd just gone past a local policeman, I asked the latter whether it was legal to ride a bike 'off-road'. Technically, no - he said - because it's illegal. They should be on the road. He then muttered something about pedestrians which I didn't catch but which I guessed was a reason for why the police never take any action against the miscreants.

So, now you know: If you come to Pontevedra as a motorist, you'll be persecuted like never before and forced to go into one of the underground carparks run by the council. But, if you come as a cyclist, you'll be left free to break all relevant laws. Even if you race down slopes in the old quarter past corners where you can't see who's about to cross in front of you. Possibly a 3 year old child running in front of its parents.

As I say, I guess it makes sense to someone. Assuming anyone on the council actually thinks about it.

Talking of making sense of something . . .

So, let me get this straight... the leader of the opposition campaigned to stay but secretly wanted to leave, so his party held a non-binding vote to shame him into resigning so someone else could lead the campaign to ignore the result of the non-binding referendum which many people now think was just angry people trying to shame politicians into seeing they'd all done nothing to help them.

Meanwhile, the man who campaigned to leave because he hoped losing would help him win the leadership of his party, accidentally won and ruined any chance of leading because the man who thought he couldn't lose, did - but resigned before actually doing the thing the vote had been about.

The man who'd always thought he'd lead next, campaigned so badly that everyone thought he was lying when he said the economy would crash - and he was, but it did, but he's not resigned, but, like the man who lost and the man who won, also now can't become leader.

Which means the woman who quietly campaigned to stay but always said she wanted to leave is likely to become leader instead.

However, none of their opponents actually want to be the one to do the thing that the vote was about, so there's not yet anything actually on the table to oppose anyway.