Corruption: Doing a 13km camino stretch on my own yesterday, I suddenly had a vision of one Spanish politician saying to another back in the 80s, in the context of Spain's entry into the EU:- You mean to say that - although they know we cream at least 3% off the top of everything - they're going to send us billions of North European taxpayers' cash??? Of course, much the same comment was probably made in Greece and in most, if not all, of the new East European members. All their Christmases at once.

Galicia's Latest Train Crash: Call me cynical but I can already see the signs that the official Renfe investigation will conclude that absolutely no one was at fault except the driver of the ill-fated train. Who just happens to be both Portuguese and, conveniently, dead. Any suggestion that the train had been moved onto a side track but that the driver hadn't been properly warned about works on the main track and told to slow down sharply trom 100 to 30kph will be rotundly dismissed as unproven. Or at least unfounded. And no one in Spain will be found guilty of anything. No resignations will follow. Así son las cosas here. But, of course, I could be wrong.

Galicia's Universities: There's one of these in Vigo, Santiago and La Coruña. Plus a long-distance learning facility (UNED) here in Pontevedra. As I tend to compare the region of Galicia with my county of Cheshire in the UK, I find this excessive. This view is shared by those in power, it seems. For it's reported there's going to be some rationalisation, resulting in each of the universities 'specialising' in some subjects. I wonder if this will be as successful as the same strategy in respect of Galicia's 3 inadequate 'international' airports. Cheshire, by the way, doesn't have even one of these, though it is close to those of both Liverpool and Manchester. Which are booming as much as our nearby option in Oporto in North Portugal. Is there a moral in there somewhere?

Boaring Threats: Our local farmers are up in arms about the thirsty and hungry wild boars getting closer and closer to the city in search of corn and water. Or, rather, they're not, as they need to seek formal permission every time they want to kill or hunt one of the animals. More and more of the smallholders are investing in electric fences, which might or might not be effective. And, meanwhile, wolves are gradually making their way south from Cantabria and Asturias!

Finally  . . .  The perils of translation: At my favourite watering hole in town, I've not only translated their menu into English and, with help, French too; I've also devised a short questionnaire for foreigners about what's good and bad about the place. Until Friday, the only negative from 25 responses - to set against a long list of positives - was that the food was too salty for guiri tastes. Not terribly surprising. But that day, someone wrote that the English translation was not just wrong or inadequate but 'poor'. Since I'm fully aware of every dish on the menu - from both eating and translating them for visitors over the years - I found this hard to comprehend. So, I checked things with a Galician friend fluent in English. He found fault only with the rendition of the French word crudités as 'fresh vegetables'. I accepted this was a mistake - born of a lack of familiarity with the item! - and will revert to the French word, as 'raw vegetables' doesn't sound quite right. Anyway, I hope the ignorant idiots return to the bar/restaurant soon so that I can take this up with them. Gently, of course.

This is Pontesampaio, on the northern edge of Arcade, our local town famous for oysters. You can see 2 things: 1. The first overcast sky in two months; and 2. How close one of our recent fires got to the houses:- 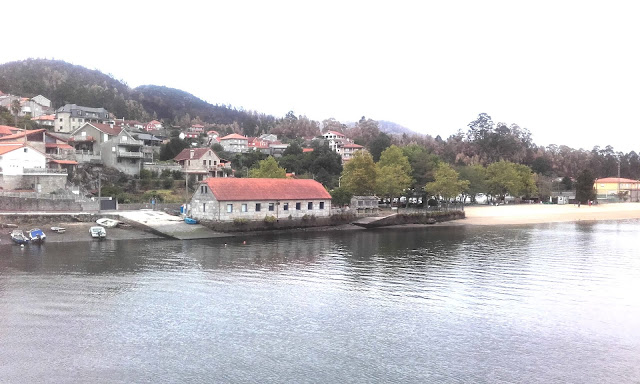 Oh, mon cher, do I need to help you out in EVERYTHING???

You are in good company. Plato objected to perspective in the arts, as he had never seen it before in his life. Unfortunately, the likes of Piero della Francesca, Dürer and Leonardo disagreed and applied it anyway…

Ah, what a nice place Earth could have been if only they had rejected all innovation!

I'm wondering where i said crudités didn't exist. Or even yr novel phrase. But citations would be nice. From rather more nodern people than Ari and you.

Where did I say you said crudités did not exist?

There is no - logical - way one can give references or citations to a novel phrase. By definition.

Who is Ari, and what, pray tell, is a Nodern People?

As you surely should have known, i meant novel to me.

When my parents, younger brother & I resided in NZ from 1949-53, we spent our summers staying in the King country on a farm at Ranana. https://en.wikipedia.org/wiki/Ranana

The farm was on the opposite side of the river from Ranana. That straight row of poplar trees was there in 1950. Beyond them, the bush started & as a 7 year old kid, I got to roam all over the place by myself on a small bike.

My father took us there so he could hunt wild pigs (so-called Captain Cookers) & there was no need for shooting licences then. European pigs in the late 18th century had not been crossbred with Chinese pigs at that time & so they quickly became feral & grew tusks.

It now appears he could do the hunting in the Forest of Dean.

Thanks, Perry. Fascinating, as ever.