Spanish (non)Government and The Spanish Economy: All is not well below the surface of the fine macro numbers of the moment. Here's a Moodys overview: Expect weakened growth in Spain as political deadlock drags on: Spain's prolonged political impasse will have a negative effect on the country's economy. Sarah Carlson, Senior VP at Moody's Investors Service, said that the prolonged political impasse was "credit negative for the Spanish sovereign" after Rajoy failed to get enough parliamentary support to lead a new government in two separate votes last week. Carlson warned that the economy – which has staged a strong recovery since Europe's financial crisis – would suffer from the deadlock. "The economic and fiscal costs stemming from the ongoing leadership vacuum are rising and Moody's expects both weakening growth and continued fiscal underperformance heading into 2017."

Brexit: Early days, of course, but . . . As is now abundantly clear, the immediate post referendum shock to the UK economy wasn’t nearly as bad as many forecasters feared it might be. Thanks in part to a sharp devaluation in the pound, even the manufacturing sector seems to have weathered the storm in much better shape than generally anticipated. The upshot is that despite the turmoil of the last several months, it is now eminently possible that Britain will show a higher rate of growth in the third quarter than the Eurozone. Few if any would have predicted such an outcome. The economy sails on as if nothing has happened, but the European one continues to stagnate. Both France and Italy showed no growth at all in the second quarter, and now even the data from Germany is starting to look poor. That the Eurozone economy is still struggling after everything that has been thrown at it almost beggars belief.

Sister Teresa: You wouldn't get this impression from the world's media but she wasn't/isn't admired by everyone. Certainly not by the late Christopher Hitchens, as you can see here. And opinion is widely divided in my own atheist/Catholic/Jewish family. As you might expect.

Tile Design: Do you fancy yourself at this? Then this is for  you.

Finally . . . Spain: A Cynical Lexicon: I came across this morning on my computer. Don't know who wrote it but have a suspicion or two. Not to be taken too seriously. Especially if you're Spanish:-

Translation - A task you give to a relative rather than pay a few hundred euros.

Zebra crossing - Something you only use if there's a certainty that any oncoming driver is not only looking at you but is also within this braking distance.

Neighbours' garage - Something to park in front of, blocking both ingress and egress.

Roundabout/Circle - A mechanism by which the maximum number of both domestic and, especially, foreign drivers can be rendered confused. Or dead, even.

Friend - Anyone you've met in a bar in the last 24 hours.

Commitment - A promise to do something which you will do unless something better comes along.

Stranger - Someone who doesn't exist and, therefore, to whom you owe no duty of care or consideration whatsoever.

Traffic indicators - Lights for indicating that your car isn't really where it appears to be and so can't be causing an offence.

TV:
Fiesta - A reason for having yet another day off. Or possibly two or even three, depending on how close to a weekend the fiesta falls.

Rules - Behaviour guidelines which apply to other people, in one degree or another. See also 'Laws'.

Pavements/Sidewalks - Strips of land for you to ride your bike on, preferably recklessly so that young kids are endangered.

Noise - Nothing to concern yourself with. Make as much as you like.

Children - Little adults who are allowed to do whatever they like.

Parking - The means by which you can scratch all four corners of your car.

Parking bays - A rough indication of where you might park. Can be safely ignored.


Conversation - Talking both loudly and simultaneously.

For readers in the UK, here's what knives in a shop window looks like . . . 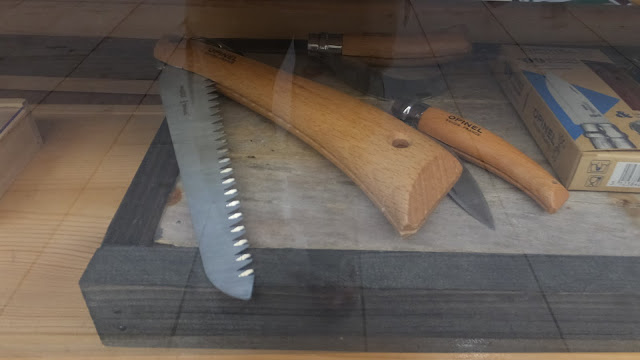 And, next door, religious artefacts . . . 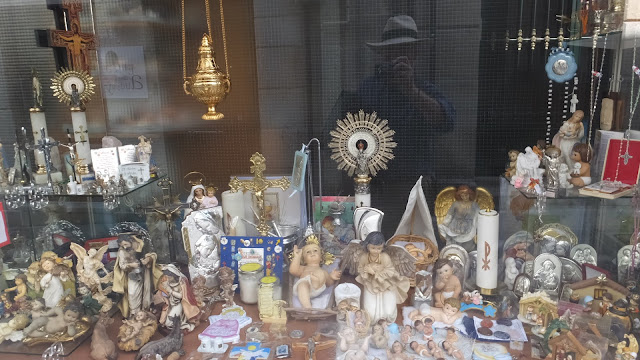 Sorry, just read this and can't resist reproducing it:
Why did Johann Sebastian Bach have twenty kids?
He had no stops on his organ.
Like the multi-child mother who was so deaf she couldn't hear her husband coming . . .
Boom, boom.

Thank-you and Goodnight.
Posted by Colin Davies at 10:22 am

Hmmm… Either you or I wrote those dictionary aphorisms about Spain. Can't rightly remember.

I can, however, add my dime.

As you referred to, but forgot to include, the lemma 'Law', here is mine:

"Law: In Spain the law is like the heavy artillery of an army: you only roll it out when an enemy appears on the horizon."

A tree pruning saw that folds for safety when up a tree & a grafting knife. I possess both items.

You should see my slater's axe & my bill hook for hand laying hedges in time honoured fashion.

I have three of these & my exquisite kitchen knives are to die for. :<)