This is a comment about Edwardian England (1901-1910): This was still a country of intense local rivalries. Small towns and villages told terrible stories about each other, and most people's sense of identity was closely bound up with the village, or the few urban streets, in which they happened to have been born and to live. Hmm. Seems strangely familiar.

It's not only in Spain, it seems, that vast sums of public money are spent on white elephants. The UK government has, so far, spent  £285m on building an unusable airport on the south Atlantic island of St Helena. Apparently, it's quite possible that no plane will ever land there. As in Spain, this madness was premised on specious tourist growth numbers. And no heads will roll.

So, Mrs May was shunned by the leaders of other 27 EU members at their meeting this week. She is, of course, a prime minister who - against her own preference - is implementing the democratic will of her electorate. So, well done, chaps. And chapess. A very eloquent indication of how you really think.

Back in 2008, when Donald Trump was setting up golf courses in Scotland, all his promotional material was adorned with his family coat-of-arms. It was, of course, bogus, being something 'designed by an amateur'. In place of a crest, there was - inevitably - just the name Trump. When challenged about it, Trump’s right-hand man, said “I believe it’s the Trump family crest. But I understand we can’t use it and we have removed it from our website, our envelopes, and our letterheads.” Nice try, Sir Donald.

So, another series of Strictly Come Dancing has come to an end. What an amazing show it is. Unmissable for someone like me who used to watch its precursor, Come Dancing, as a boy. Enjoying the final last night, it struck me it's good there's an adverb we can use and call it just Strictly for short. As opposed to . . .

Mac Footnote: I won't bore you with details of my numerous Sierra problems. But, separately, last night the machine, despite being connected to the power, cut out and refused to come back on. My worst nightmare. I eventually traced it to a frayed cable where it joined the transformer. Not, by any means, the first time this has happened with Apple cables for me. I would mind less if replacements didn't cost around a thousand quid. I've finally managed to tape up the cable so that it works but I'll surely have to buy another one. The third in 5 years. I wonder if they sell them down in the Chinese shops (los bazares). 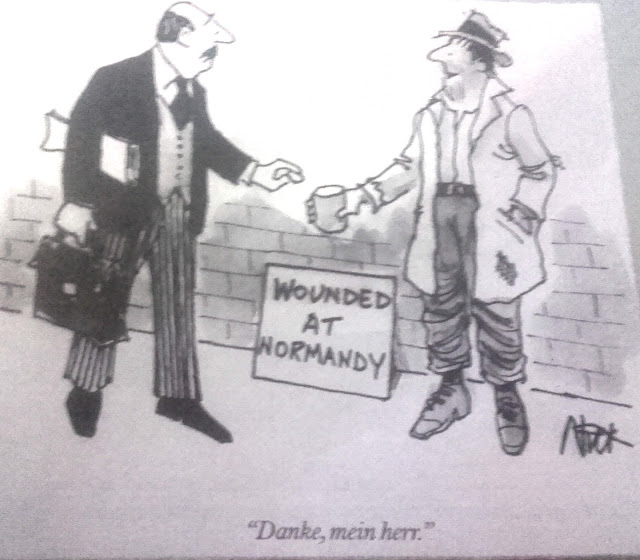 Finally . . .  This being the season for them, here's a guide on how to interpret those awful round robins. Yes, I confess. I did send one in 1995. And a spoof one the next year. Which didn't amuse some of my friends:-

What round robin letters say . . . and what they really mean: Michael Hogan

'Tis the season for soppy TV ads, excessive mince pie consumption and, crucially, replenishing your pile of Christmas round robins. Cunningly concealed within greeting cards, out they come fluttering: double-sided sheets of A4, charting all this year's neighbourhood news, from the arrival of Keith’s new shed to updates on how Jean is getting on with her titanium hip.

This much maligned yet still widespread phenomenon took off during the Eighties, when home computers (usually an Amstrad, Sinclair or Commodore) were introduced to the world. Suddenly, every amateur scribe could become a back-bedroom publishing magnate, able to type up an annual family news round-up of varying length – two pages being the norm, although some found it unable to resist circulate rambling efforts that are much, much longer – before printing off multiple copies and tucking them inside their Christmas cards.

As software and IT skills became more sophisticated, courageous types even started incorporating photographs into the text. Up popped pictures of graduation ceremonies, fairy-tale weddings and purple-faced newborn babies - often with the additional thrill of trying to work out who was who, given the streaky ridges from where the pesky printer ran low on coloured ink.

The original pre-Facebook status update, these festive bulletins are then sent out indiscriminately to everyone on the Christmas card list, ranging from cousins or close friends who’ve moved abroad - and might conceivably be interested in trivial news nuggets from back home - to virtual strangers met briefly on holiday or at a work conference.

Sometimes they  provoke the nods of agreement, hoots of laughter and heartstring-tugs now more commonly charted in likes and shares. But as the content of the average round robin letter is narrow in scope yet big on smugness, they often read like a blend of faux-casual bragging about holidays, home improvements, academic achievements and career success, seasoned with tedious minutiae involving pets, petty neighbourly disputes and physical ailments.

Not forgetting a generous dollop of showing off about high-achieving children and darling grandchildren, in whom, if we are really honest, nobody outside the immediate family is terribly interested. Come to think of it, many of those inside the immediate family might not give a festive fig either - even if the missives do come topped off with a charming holly border courtesy of World Clip Art.

Yes, the unread round-robin is coming bob-bob-bobbing along your garden path in the postman’s bag. Don’t despair, though, because as seasoned seasonal bulletin receivers will know, there is often more to these news blasts than meets the eye. Guessing the tragicomic truth behind the upbeat tone and unsubtle boasting can take the fun of receiving the round robin to a whole new level. Here’s our handy translation guide to 31 things that people write in their round-robin letters - and what they really mean…

They say: “Dear friend…”
They mean: “Dear person I met once, many moons ago, and who now hates me due to this annual bombardment of banality…”

"We had an idyllic holiday in the Seychelles, two weeks of blissful relaxation”
By Christ, I was bored

“We're hoping to take a cruise”
We've got nothing left to say to each other, so want to get drunk every night with total strangers

“Sophie’s A-level results were a source of pride”
We paid for Sophie to have extra tuition after she fell in with a bad crowd, began binge-drinking in the park and flunked her mocks

“We were lucky enough to receive a windfall from a distant aunt”
We were hoping the old battleaxe would leave us more, to be honest

“Lotta won a medal at the school sports day”
Lotta attends one of those schools where they don’t believe in competitive sport so everyone gets a medal, even the asthmatic ones with a club foot

“The skiing trip was a great success”
It was over-priced and there were too many Brexit jokes at our expense. At least no bones were broken this time.

“The new conservatory is a fabulous addition”
It’s ice cold in winter, sweltering in summer but it cost a bomb so we’re pretending to like it

“Sebastian has travelled extensively on his gap year, most recently to India”
Sebastian is a workshy fop who’s currently smoking something highly illegal on a beach in Goa and will come back sporting henna tattoos and a bindi

“We finally took the plunge and bought a brand new Volvo, which we adore”
It’s not a Lexus, but what can you do?

“Peter got a well-deserved pay rise this year, so we’re weighing up what to do with the extra income”
Peter got a small incremental increase in line with inflation which will make no discernible difference

“The hotel was charmingly rustic”
We spent our entire stay complaining

“Our much-loved cat, Mr Snuggles, sadly passed away but the grandchildren helped us hold a sweet funeral service in the back garden”
The vet’s bills for an individual cremation were extortionate, so the grandchildren buried a shoebox of assorted animal remains

“The allotment is flourishing and produced a bumper crop of courgettes this year”
If I ever have to eat ratatouille again, I’ll top myself