Education in Spain doesn't usually get good reviews but the latest PISA global survey (2015) shows that the country is finally getting close to the 500 point average. Specific results were 493 for Sciences; 486 for Maths; and 496 for Reading Comprehension. These rose by 3, 2 and 8 points respectively. But there was a significant difference between the richer norh and the poorer south, with Castilla Y León getting 519 for Sciences, for example, against 473 for Andalucia. Overall, Spain features for the first time in the same group as the US, France, Russia, Norway and Sweden. All of whom are all a long way behind 'winner' Singapore, on 556 points.

Well, no one can say I didn't warn them . . . The new minister of Development, blaming the hiatus in government and the (suddenly discovered) difficulty of not just one but 5 particular stretches, has admitted there's not a snowball's chance in hell of the Madrid-Galicia AVE high-speed train being operative by the end of 2018. He's declined to give an alternative date but my suggestion is merely replacing the number 1 with a 2. That should do the trick and ensure no further let downs, even if it means the thing being 20 years late.

Yesterday was The Day of the Constitution and the 'far-Left' Podemos party boycotted the celebrations in Madrid. Personally, I find the concept of such a day rather quaint but, on the other hand, it seem churlishly adolescent for parties to behave thus. Gesture politics, I guess. But gestures are always more important to the Left than to the Right. Something to do with purity, I think. Hence the virtue-signalling. Of which students are rather fond, of course.

The mayor of Pontevedra city of off to China soon, to receive the 5th international award for the improvements he's presided over for 'pedestrians and cyclists'. I wonder if any of the promotional videos show the latter weaving dangerously in and out of the former. I rather doubt it.

The city's town hall is bedecked with a banner similar to the one in Veggie Square I posted last week:- 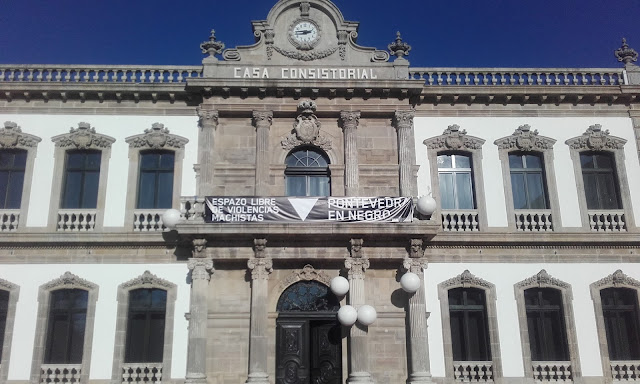 It stresses that the city is not a place for macho violence but I don't know what the significance is of Pontevedra being 'in black'. Perhaps mourning for the victims.

I'm writing this in the Parador created from the former Benedictine monastery of Santo Estevo, up near Ourense. This must be one of the finest in this government-owned hotel chain. And the 3-chloistered monastery is quite magnificent. Here's a view as I arrived at 3.45 yesterday:- 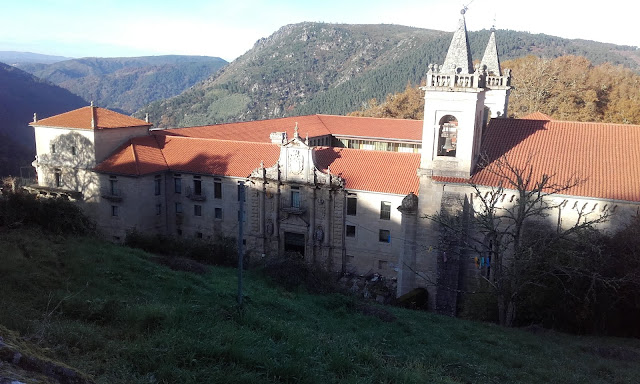 Ironically(?) this is a pretty God-forsaken place now but must have been exceptionally so when it was founded in the 6th century. Access can only really have been from the river Sil, the valley of which can be seen in the background.

And here's a couple of the cloisters last night:- 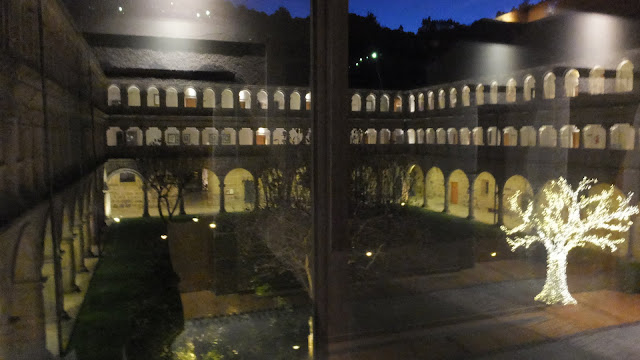 Postscript; I had thought that this monastery might have been the one featured in Graham Greene's novel Monsignor Quixote but, in fact, this was the one in Oseira. My next stop.
at December 07, 2016