This morning finds me in the tiny hamlet of Campiello, south west of Oviedo in Asturias. I arrived here at 8.15 last night after a somewhat hairy drive from Pontevedra.

Things went well until I got near to the A6/A8 junction west of Lugo, where I expected my satnav to take me north and then along the coast, before turning south to Oviedo and Campiello. But it told me to continue towards Lugo and then set off across country on the LU530. So I checked with Google Maps on my phone and it chose to differ, offering me a route that would take 45 minutes more. I didn't know at the time but this was almost certainly taking me to a different Campiello, also in Asturias. Such are the perils of satnavs in rural Galicia and Asturias, where village and town names are frequently duplicated. If not quintuplicated. Or ever more. Try Portela, for example. Click here for the 2 Campiellos of Asturias. But possiby not all of them.

Anyway,  I followed my satnav and enjoyed a beautiful drive through the Lugo mountains via Castroverde and A Fonsagrada, towns which I would've visited during my Primitivo camino last spring, if I hadn't collapsed in exhaustion in said Campiello at the end of 3 days struggling up some very steep slopes.

Not long after A Fonsagrada, I noticed a couple of snow ploughs ready for business at the side of the road. And the temperature falling from 3 degrees to zero. And then the snow falling . . .

The road continued to climb, the snow began to stick, the car began to slide on corners and I wondered whether I shouldn't give up on Campiello and head back to A Fonsagrada for the night. But I drove slowly on, hoping the snow would stop once I'd reached the top and started descending. Which it did. Only to re-start once I drove up the next incline. Repeatedly. But, driving cautiously - and using the tracks made by the (very) occasional car coming in the opposite direction - I made Grandas de Salime and then Berducedo. And finally arrived at Campiello, a mere 30 minutes later than my satnav had originally advised.

I had hoped to surprise there the 2 ladies who'd tended to me when I'd collapsed into Casa Herminia there last year and for that reason I'd made an attempt to disguise myself a little. But Herminia recognised me immediately, which was both disappointing and pleasing. The other lady, though, wasn't there . . . But a couple of glasses of the local red wine and a huge jamón sandwich on home-made bread went some way towards compensating for this.

Today I drive to Oviedo and then Santander, for a ferry that leaves around 8.30 this evening and arrives in Portsmouth at much the same time tomorrow. Depending on wifi on the boat, there might or might not be a post tomorrow morning.

Footnote: For years, I've been trying to find the identity of a particularly ugly town which I once passed through when enterering Galicia from another region. I finally realised last night this had been A Fonsagrada, which I had seen en route from Oviedo to Pontevedra before the coastal A8 had been finished. My apologies for upsetting any reader who lives there. You have my sympathy. But the drive to and from Lugo is gorgeous. So some consolation, then.

And it's probably quite nice to and from Campiello, when its not as black as pitch and the snow isn't falling.

Footnote 2: If, perchance, you're reading this because you're strong or daft enough to be thinking of doing the Primitivo camino, I can't recommend too strongly Casa Herminia. The good lady has established here - in a hamlet of just 5 people - not just an albergue for indigent pilgrims but also a hotel, a large bar and a well-stocked shop. Ambitious or what? The facilities in the hotel are excellent, as I shall shortly say on Tripadvisor. 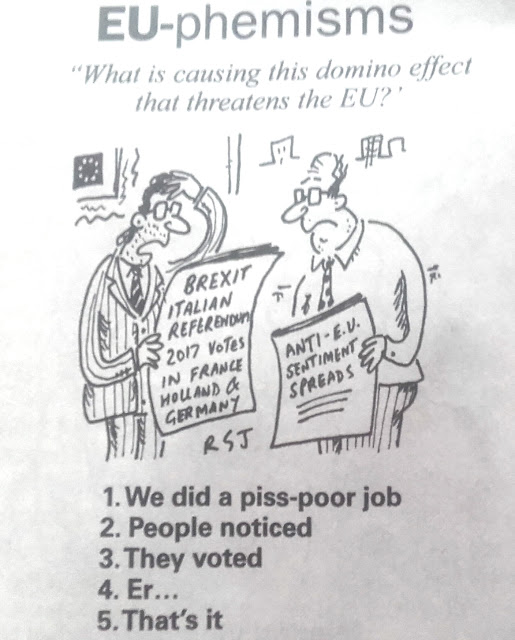 Whilst agreeing with your verdict regarding A Fonsagrada, within three or four kms. there are some worthwhile places - the best:

It sounds as though Friday 13th may have got you after all. Fortunately you got away with it!

As soon as you mentioned A Fonsagrada, I was reminded that it has unusual wildlife.

As for the snow, be glad you won't be having frozen turkey to eat.