Well, I am back from my latest camino and the good news is that there's no letter from the Hacienda (Tax Office) in my mail box. Better still, there's a note from Correos (the Post Office) saying they have in their “deposit box for 'lost' items” some documents of mine. These were in my wallet pick-pocketed in the tourist trap of El Mercado de San Miguel in Madrid almost 2 weeks ago. But there's no mention of the wallet itself. Nor the €300 in it!

So, back to normal.

But, first, come Toledo Travel Tips:-
Life in Spain
Finally . . . Just one foto, albeit not a good one. Of the stunning train station in Toledo:- 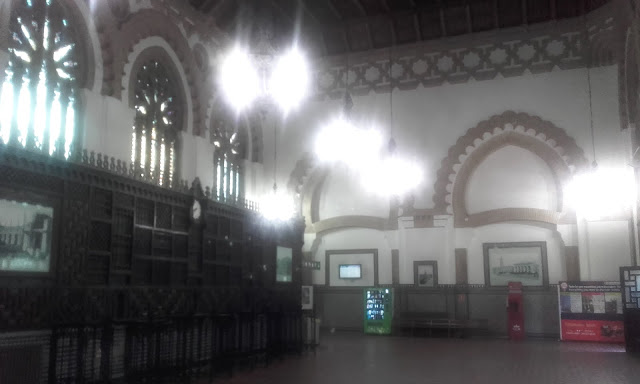 A lot of people run thru the Toledo Cathedral and walk right by the Transparente. Its a hole that was put in the ceiling in the 18th Century and decorated with frescoes etc. There is also an altarpiece under it. Located directly behind the main altar, on the other side of the wall of course. Part of the reason they put it in was to add more natural light. I know people who have been thru Seville Cathedral who were surprised to learn later that Columbus's tomb is in there, or isn't. Anyway the Transparente is magnificent.

David Cameron, Conservative Party's leader and UK First Minister, in a (rare) show of bravery, has accused the SNP's attempt to hold a referendum on Scotland's self-determination as an illegal and anti-democratic attempt to secession from the United Kingdom. Such a referendum, he put it, "will not take place". 12 SNP's officials have been arrested. Scotland's official buildings have been raided and 9M voting ballots seized. Protests in the streets have already been qualified as “rioty” and will be liable to criminal prosecution. Fines of £9000 a day have been issued to several Scottish' government officials. Two cruise ships have docked at the port of Leith, to accommodate the anti-riot police that will be deployed outside any suspected illegal voting station.

The Civil Guard (a paramilitary police dating from the Victorian times, when the rabble was a real threat) will also be on standby, with any ongoing holidays for its numbers being cancelled. Mr Cameron Internal Affaires minister has lamented that there is not a Scottish “Guard Boys Corp” to blame and be taken off duty for lack of efficiency to deal with this unnecessary crisis.

Websites from the Scottish devolved government have been closed and Westmister has taking over the finances of this northern and overly smug region.

The seccesionist have accused Mr Cameron of pandering to sabre rattling form the British Army (“be the best”) but the Prime Minister has assured that he is in no need of “patriotism” lessons from the Army, or form anyone else for all that matters. He can trace his ancestry, and that of his government officials - and party colleagues - to the previous undemocratic times, when everything was much simpler and reasonable.

Last night, in an unexpected show of solidarity, the Spanish Prime Minister, Mr Rajoy (a truly Galician patriot), has backed Mr Cameron’s actions, despite last year’s referendum of self-determination in Catalonia, which he allowed and in which he himself campaigned actively as well as debated civily with his opponents. Long ago are the “Francoist” times, when such a political exercise would not be allowed.

And Mr Cameron has made it clear though that events like the 13 colonies revolt, Baltic States or Ireland are not examples to take into account, but just bad examples of failed states and oppression.

Next post in my blog: “Foreign policy in the UK: liberating Syrian people from his corrupt and mass killer ruler”

Have a good day everybody, boa noite!