Matters German/Hamburg
Matters Spanish
[If you can bear it] Brexit 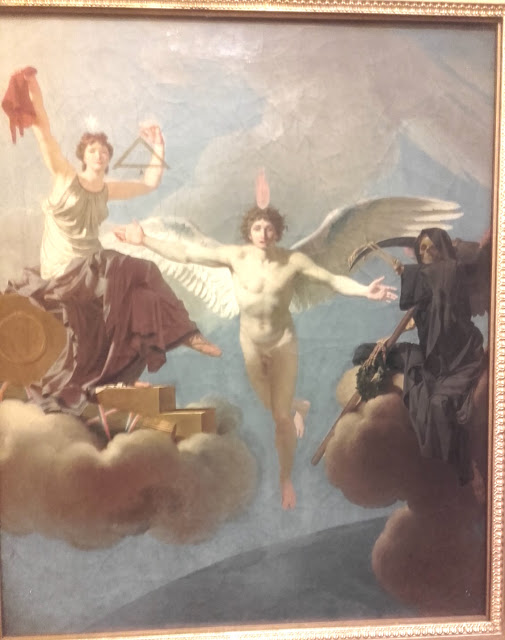 The PM was at her best alone and friendless: Janice Turner, The Times

As a typical only child, Theresa May is unclubbable and gauche but also has the strength not to give a damn

Almost since she took office, I’ve wondered why Theresa May carries on. Imagine you must solve an impossible conundrum knowing your solution will please no one; you must square up to your peers in Europe who mock, pity and delight in your doom; an intemperate opposition, with no clue of its own, shrieks from the sidelines; while your colleagues are self-serving shysters, tweedy totalitarians and privileged bolters who unzip Savile Row flies to hose down your tent.

It’s not as if Mrs May relishes the trappings of power. No kingly Cameronian swanning around Chequers with chums, just weekends at home, at church, browsing her cookbooks with Philip. No preening Tony Blair pleasure in public performance for the most awkward woman alive. She is not young, she has diabetes, she could enjoy city directorships and a nice quiet life. Why rise each morning to fresh hell?

No one in politics “loves” Theresa May, she has few acolytes, no one thrills to hear her speak, her memoirs (if she bothers) will hit the remainder pile. But watching her press conference on Thursday it was hard — even if you’d never vote for her — not to feel respect. When she said, “I firmly believe that the draft withdrawal agreement was the best that could be negotiated”, I’d bet mainstream voters, the non-mad Leavers and just-get-on-with-it Remainers agreed.

She had recognised that freedom of movement, not a customs union (which many don’t understand, let alone care about), was the Brexit red line. And she applied such talents, energy and intellect as she has to win that demand without shafting the economy. While David Cameron skulked in his shepherd’s hut, David Davis could barely be bothered to go to Brussels and every other Brexit backseat driver blathered about how their own pure deal would kick Juncker in the balls, May sweated the detail. She tried. And God, they say, loves a trier, even if the Tories don’t.

In management speak, May’s appointment was a classic “glass cliff”. A 15-year survey of Fortune 500 companies showed that when a firm was thriving it mainly appointed a man as CEO, while women were most likely to be chosen if a company was in peril. In part, ambitious men are reluctant to touch a toxic firm that might taint their reputation, while women are grateful for any chance. Yet also the perceived female virtues — selflessness, patience and stoicism — are seen as more useful in untangling a corporate mess.

Certainly these are Theresa May’s political skills, perhaps her only ones. By every other metric she is a terrible politician and certainly not a leader to inspire. Even more than Gordon Brown she is an overpromoted first lieutenant who has never conceived an original thought. As shallow as Cameron was, he had the charisma to project a modernising credo and, at times, the apposite phrase to make the nation feel good.

May has no lateral thinking or big-tent appeal. All her fine phrases about “fairness and opportunity” in her first Downing Street address and her social justice speech on uneducated white working-class boys, black men in prisons, young people unable to afford homes, led nowhere. Rather, she pushed on with austerity and universal credit, and authored the scandal of Windrush.

Nor can she lighten the mood with a good joke or an impromptu phrase. She has no hinterland: her supposed passion for fashion feels like a lingua franca adopted, like Cameron’s football fandom, for the purpose of voter small talk. Beyond the text before her, she is wooden, tongue-tied, excruciating when she tries to be cool or informal, dancing for trade deals. Yet she didn’t even have the self-knowledge to reject a personality cult election strategy where her uncomfortable nature was thrust squirming into the spotlight, gibbering about wheat fields and reciting “strong and stable government” on a loop.

But on Thursday she did, all things considered, look strong and stable. She is an only child — as am I — and we may be poor collaborators, worse delegators, unclubbable, cussed, solipsistic and gauche. But, boy, are we good at standing alone, not caring what the world thinks of us beyond the very few people we love. Nasa often selected only-children as astronauts because they aren’t lonely even in space. An eldest child says: “Hey, everyone, let’s do it this way!” An only child says: “I don’t care what you do, I’m doing it my way.”

By Thursday, the worst was over for May, all that tiresome persuading, listening and taking on board criticism. She’d done it her way and if people didn’t like it, well, bring it on! As she stood for three solid hours in parliament riding every blow, she reminded me of Hillary Clinton’s 11-hour interrogation by the Benghazi inquiry. Later, at her press conference, indomitable, even cracking jokes, her hunched persona was unbound: she was Mrs Thatcher baiting Labour on the day she resigned, crying: “I’m enjoying this!”

Max Hastings once wrote that in battle he’d trust Cameron over Boris Johnson: the latter would run off with all the provisions, the former would get them all out alive. In fact, both fled the field of combat in the end.

For two years Remainers applauded every EU salvo against a workable exit, yet want a second referendum even if it immolates the last tatter of social fabric. Brexiteers would rather tip Britain into a Leninist “the worse, the better” no-deal chaos than approve a fudge. Amid the ruins of our political consensus and a war-weary electorate, at least Theresa May did her best.

Paternoster lift. You are always over the top, Colin. We had one at Harrow Technical College in 1960, now laughingly called the University of Westminster, Harrow Campus.

I took A Levels there in Zoology Chemistry & Physics back then. Now it's the ***king Westminster School of Arts and Westminster School of Media and Communication. The worst degree courses it's possible to study, as they are snowflake qualifications & practically guarantee lifelong unemployment.

Theresa May has Diabetes. With whisky & baked beans for supper, I'm not surprised she is so confused about Brexit. It should be invalid for invalids to lead political parties. Critical thinking skills are required & I'm not seeing that TM has any.