Spanish life is not always likeable but it is compellingly loveable.
Christopher Howse: A Pilgrim in Spain
Spanish Life 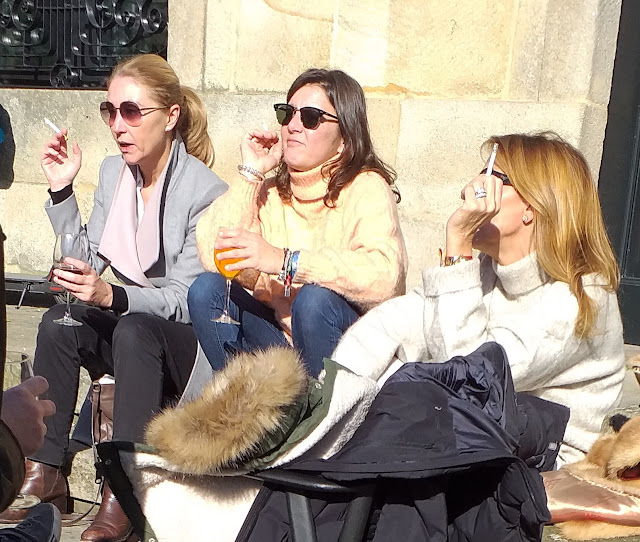 It'd be difficult, if not impossible, to take a foto from  the same spot today, essentially because of the AP9 autopista:-

But I'll have a go at this this week. However I won't be crossing the AP9 on foot, as some madman tried to do last week, to his eternal cost.

Don’t go to a spa — join a pilgrimage

Pilgrimages have been reborn as soul food for stressed midlifers

The moment I realised that I was still very much a “pilgrim in progress” was when I had my wife bind up my bruised and raw feet with plaster tape and hobbled down to breakfast at our rustic farmhouse B&B in Lazio — we were still some 40 miles from Rome — and observed the 7.30am buffet offering.

The “muesli” looked like dried cardboard. The stale biscuit-style toast resembled something from an Aeroflot flight in the 1970s. The concentrated orange juice was served in a prison-issue plastic cup. We were on day four of a 68-mile walking pilgrimage along the Via Francigena, following the medieval route that pilgrims took from Canterbury to Rome. The week-long walk was to celebrate the canonisation of Cardinal John Henry Newman, the first English saint in modern times.

“I know the trip is meant to be good for the soul,” I whispered to my wife. “But I’m sure the medieval pilgrims ate better than us. I mean, we’ve only got another 18 miles ahead of us today.”

At this point one of our pilgrim group (which ranged from a seventysomething former MEP to a British actress-screenwriter who had flown in from Los Angeles) sat down opposite me. She was a glamorous Italian walking fanatic who lived in London with her financier husband. She was carrying several sachets of gourmet muesli that she had brought with her. “Italians don’t really do breakfast,” she said. “So I’ve brought my own power food supplies.”

That the 12 of us were paying about £2,000 a head for a Catholic Herald magazine bespoke pilgrimage experience that involved roughing it like monks in hair shirts is an indication of how walking pilgrimages are enjoying an extraordinary revival. Spiritual wellbeing and taking a mental-renewal holiday are as popular with the well-to-do professional classes as a white sandy beach in the Caribbean.

Journeying to holy places by foot, as chronicled by Chaucer in The Canterbury Tales, used to be Britain’s most popular form of penitence, spirituality and festival holiday exercise, as enjoyed by royalty, peasants and crusaders. However, this ended in 1538 when Henry VIII and Thomas Cromwell banned pilgrimage in Britain.

Now it has been reborn, after the founding in 2014 of the British Pilgrimage Trust (BPT). The trust was established by two men in their thirties, Dr Guy Hayward and Will Parsons, and its patrons and advisers include the Duchess of Richmond; the Duchess of Norfolk; Sir Simon Jenkins, the journalist and author; Emma Bridgewater, the ceramics mogul; and Fiona Reynolds, the former National Trust director. Hayward is one half of a satirical cabaret that has performed at 10 Downing Street, but also a former choral scholar who runs a website devoted to evensong around Britain. Parsons, meanwhile, is an atheist with an interest in traditional song. They’ve recast pilgrimages as a non-religious, “bring your own beliefs” experience.

“There is a global renaissance of pilgrimage,” Hayward says, pointing to the almost 330,000 people who got their pilgrim passport stamped for walking the Camino de Santiago in Spain in 2018.

This was certainly the case with a pilgrimage I went on on November 1 last year, this time only a day long. At 9am on All Saints’ Day I was part of a small group frisked by security as we were escorted into the Old Bailey in London dressed in trekking trainers and hiking gear. Led by Hayward, we were to spend the day walking the Martyr’s Way, about six miles through London, beginning with a tour of the Central Criminal Court given by a barrister in full wig and court attire.

It followed the journey of the condemned from the Tower of London or Newgate Prison to places of execution, including Smithfield and the Tyburn Tree near Marble Arch. The route we took is devised by Hayward and the author Dr Rupert Sheldrake to take in places of martyrdom, including the Church of the Holy Sepulchre, near Newgate. This houses the Execution Bell, which was rung outside the cells of those facing execution as a warning to repent (accompanied by a proclamation from the church’s sexton: “Prepare you, for tomorrow you shall die./ Watch all, and pray, the hour is drawing near”).

“Pilgrimages are in revival as they are a very basic practice that feature in all culture and religions,” Sheldrake says. “Pilgrimages are transformative experiences. It’s usually a journey to a holy place and a wonderful way to be together in a meaningful experience. Walking is good for you. Being outdoors is good for you. So is doing something with a destination and sharing a common goal purpose with other people.”

The Camino de Santiago, the cross-Pyrenees route known in English as the Way of Saint James — leading to the shrine of the apostle of St James in the cathedral of Santiago de Compostela in northwest Spain — has exploded in popularity in recent years as a form of spiritual tourism, increasingly catering for the affluent traveller looking for some redemption. The success of the route among pilgrimage addicts — a group in which I now include myself — has revitalised the local economy.

Britain has some catching up to do. Hayward hopes the Old Way from Southampton to Canterbury will become a flagship route for modern pilgrimage in Britain. The route was discovered recently on a 14th-century road map and has been developed into an “authentically ancient 220-mile pilgrimage route via the South Downs”. It will take several weeks to walk, with pilgrims being encouraged to sleep in churches, especially those not used for regular worship. Part of the appeal of pilgrimages is that groups tend to be small — typically 6 to 12 — and you feel as if you are on a walking house party.

The increased numbers of “old way” routes opening up is part of the vogue for “slow travel”, predicted to be one of the top trends of 2020 by the Association of British Travel Agents. The challenge is “turning visitors into pilgrims”, Hayward says. As part of this drive, an initiative is being launched to mark the 2020 Year of Cathedrals. This is a collaboration between the BPT and the Association of English Cathedrals to enrich the experience of arriving at British cathedrals on foot.

Each Church of England cathedral will have a route available to its visitors, offering options ranging from one day to several weeks. The routes can be downloaded on to a digital map app and follow the success of the Walking with Saints partnership between the BPT and English Heritage. This initiative involved the creation of ten historic trails, ranging from the two-day Abbesses’ Way in Shropshire (from Wenlock Priory to Shrewsbury Abbey), to St Hilda’s Way in North Yorkshire. “Cathedrals are, in some way, holy magnets,” says Hayward, who helped to map the new routes. “They draw you towards them, most obviously in a visual sense as they are often the only thing you can see on the horizon. Cathedrals are the ultimate symbols of destination.”

Pilgrimages must not be confused with walking holidays. Their appeal is partly as a way of challenging oneself and reconnecting with a sense of place, culture and spiritual self. It has been interesting to see how many of these new “pilgrims” are wealthy professionals wanting to switch off from the world.

One thing that I noticed about my Via Francigena spiritual adventure is that the wealthier the pilgrim (we had several multimillionaires), the less likely they were to complain about the monk-like sleeping arrangements or stale toast. Many of the 330,000 walking the Camino are middle-class people wanting a break from the rat race, and many are going through a midlife crisis or divorce. The trend seems to be for endurance and suffering. Another pilgrimage was launched in November, the Western Front Way, which covers 600 miles of the battlefields and sites of the First World War.

Such walks offer a chance for reflection and living in the present. I liked that each morning we were handed an itinerary by our pilgrim leader and, like obedient monks, we never questioned the route or pace. I found not having to make any decisions, other than an occasional point towards a promising-looking trattoria around lunchtime, strangely liberating.

As we headed off on the Via Cassia towards the ancient fortified town of Viterbo, seat of the popes in the 12th and 13th centuries, beginning with Pope Eugene III, it felt extraordinary to march in the hot October sun towards the Eternal City along the cobbled road — with no cars allowed — that legionnaires, pilgrims and slaves would have walked some 2,000 years ago.

A rare treat on our monkish adventure were the paninis at the café of the ancient Il Bagnaccio baths in a valley just outside Viterbo where locals — generals and priests — have been bathing in the hot sulphurous springs since Etruscan days. I was nervous to recall that these Bullicame springs were mentioned by Dante in the Inferno, but only because the “waters are shared by prostitutes”. Fortunately, the crowd sharing the springs looked to be respectable Italians enjoying a spa day, although as pilgrims we were required to shower before heading into the shallow water.

The spartan accommodation in the Italian agriturismos took its toll among some of our group (there are no “honesty fridges” containing frozen Mars bars; if we got hungry along the route, we ate hazelnuts picked off the trees). The Italian with her own muesli fled on day five after opening her bedroom window to find that the view was of a generator; another abandoned the pilgrimage after receiving a society lunch invitation in Rome. Neither received their Vatican stamps — to qualify as a pilgrim you have to cover a minimum of 60 miles. Without taking a taxi.
at January 13, 2020