Note: One or two of the items below have been borrowed from Lenox Napier's Business Over Tapas of today. 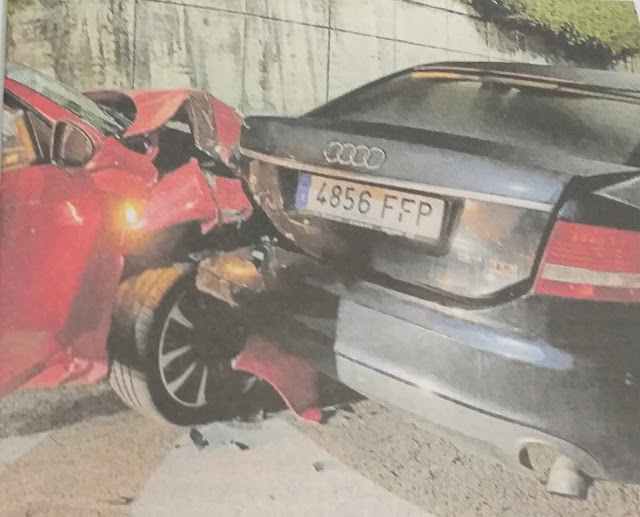 This is the second time in a year that the (slow learner?) owner of this car has come out to find this scene. But I've always thought he was pushing his luck parking on the bend.

Having seen only a few of these, I can't really comment on what makes them so incompatible with today's mores.

Irene Montero, Minister of Equality after a meteoric career that began at age 16 in the Communist Youth

The 'number 2' of Podemos and until now the Parliamentary spokesperson of United Podemos, Irene Montero (Madrid, 1988), will become the next Minister of Equality of the first Coalition Government  formed in Spain since the Second Republic.

With a degree in Psychology from the Autonomous University of Madrid (2011), and a Master's Degree in Educational Psychology (2013), Montero left in 2015 the doctorate on educational inclusion she was doing - with a University Teacher Training grant -, to to be able to devote full time to politics and to her work as a deputy and leader of Podemos. He also waived a scholarship at Harvard that he had already granted.

In addition to her work as a PhD student at the Autonomous University, Montero includes in her presentation sheet of the Podemos website a work between 2010 and 2011 as an employee of an appliance and electronics chain that made her studies compatible with Psychology. He also reports that in 2009 and 2011 he lived in Chile for several months.

This Madrileña  - from a family from Abulanse and is energetic, vehement and a perfectionist, according to her relatives - began as a member of the Communist Youth aged 16. In 2011, the 15-M Movement and the Mortgage Affected Platform (PAH) marked a before and after in her political career.

As an anti-eviction activist, Montero began to take part in the public debate by acting as occasional spokesperson for the PAH, mainly in the Tuerka program presented by the then still university professor and now secretary general of Podemos, Pablo Iglesias.

It was after the European elections of May 2014 when Montero landed in Podemos, and in the autumn of that year, at the founding assembly of Vistalegre, she was elected member of the first State Citizen Council (EEC) - the highest governing body of the training--.

Her entry in the Executive of the purple party and in the hard core of the formation was a matter of months, since in March 2015 she was appointed Secretary of Area Coordination and soon began to act as head of the Cabinet of Churches.

In December 2015, she became a deputy with 27 years, after being elected in the first general elections to which Podemos appeared since her birth as a party. Montero then concurred as number 4 for Madrid and assumed the deputy spokesman of the Confederal group United We can.

At the assembly of Vistalegre II of February 2017, the Madrid deputy was raised as the second most influential leader of the purple party, after Iglesias, and replaced the former 'purple' leader Íñigo Errejón, who already already had banished as the right hand of the secretary general and foreseeable successor when Iglesias retires.

In that second assembly, the first that we could celebrate since her arrival in Congress, Montero wanted to make it clear to members and party positions that her presence in the institutions should not alter her principles or her way of doing politics. "We can't like carpet more than asphalt. We can't like offices more than the rests of houses where people are evicted. We can't like TV more than being side by side with people from this country, " she said then.

Now, with the motto "for a life that is worth living" as a maximum in her political work, Montero arrives at the Government, at 31, the same age as was the Minister of Equality of Spain, the socialist Bibiana Aido, when President José Luis Rodríguez Zapatero put her in charge of that new portfolio, and made her the youngest minister in the history of Spain. The leader of Podemos does not beat her record, but matches it.
Posted by Colin Davies at 10:21 am