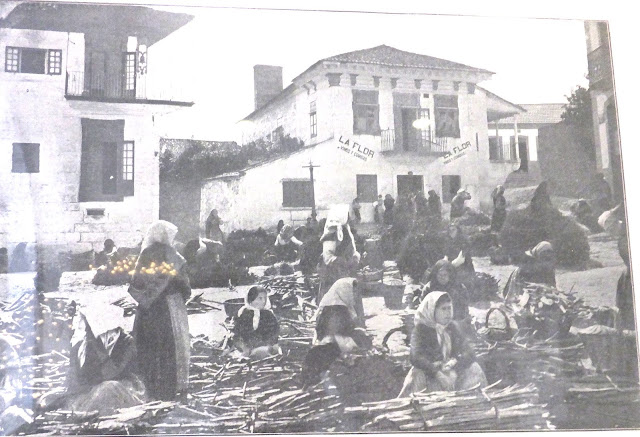 And here's the same scene today:- 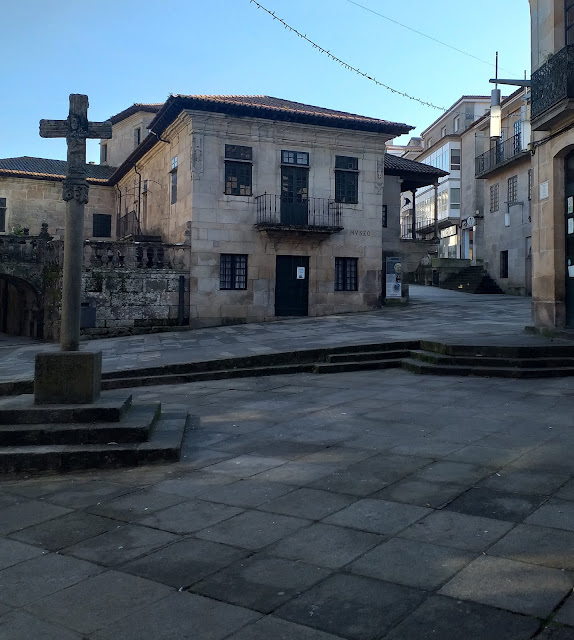 This building - once a bar called La Flor - is now one of several forming the museum complex. The only thing sold in the square these days is food and drink, as it's home to 6 or 7 restaurants. There'll be more of these contrasts over the next week. Stay tuned!

Portugal
The EU
The UK
The USA
- Since 2017, the USA has not only abdicated its role as a stabilizing leader on the global stage, but is also sowing unpredictability and chaos abroad.
- poisonous political partisanship.
- While exploiting the anger at the establishment that snowballed around the world in response to the 2008 financial crisis, Mr. Trump has also cruelly amplified existing divisions and resentments in America, fueling suspicion of immigrants and minorities and injecting white nationalist views into the mainstream, in efforts to gin up his base.
- Around the world, liberal democracy is facing grave new challenges, authoritarianism is on the rise and science is being questioned by “post-fact” politicians.
- There's a sense of “heated exaggeration, suspiciousness, and conspiratorial fantasy”. Its language is apocalyptic (Mr. Trump’s “American carnage” is a perfect example); its point of view, extremist. It regards its opponents as evil and ubiquitous, while portraying itself, in Hofstadter’s words, as “manning the barricades of civilization.”
- in paranoid style,

That was the decade that was, and somehow the EU is still standing​. Oliver Moody, Times.​
​
Crises over migration, sovereign debt, Brexit and rebellious eastern member states have tested the European Union in the past ten years — sometimes, it seemed, almost to destruction — but are there more over the horizon?​

On December 10, 2012, Herman Van Rompuy, an amiable Belgian given to writing haikus in his spare time, walked up on to a stage in Oslo for the proudest speech of his life.​ ​In the depths of its most serious economic crisis since the Second World War, as Greek protesters waved placards depicting Angela Merkel as the reincarnation of Adolf Hitler, the European Union had been awarded the Nobel peace prize.​ Mr Van Rompuy, then-president of the European parliament, cleared his throat. “If I can borrow the words of Abraham Lincoln,” he said, “what is being assessed today is ‘whether that union, or any union so conceived and so dedicated, can long endure’.”

Those words are as true at the end of this decade as they were in 2012. Over the past ten years the ideals of European integration have been tested to their limit, and in some cases broken, by a series of rolling disasters that have come to seem like one unbroken but shape-shifting catastrophe.

At the dawn of the 2010s the euro was threatened with dissolution. Greece owed its creditors more money than it could pay back if its entire economic output were to be turned over into their hands for a year. Its bonds were downgraded to junk status by several credit ratings agencies and there were deadly riots against the government’s drastic austerity reforms.

There were concerns that the rot could spread far beyond Greece to the likes of Italy, Spain, Ireland and even France. By early 2012, one in four Greeks was unemployed and a prominent economist had raised the concrete prospect of “Grexit” — an ignominious departure from the euro scarcely a decade after the first banknotes had entered circulation. It was profoundly unclear whether the young currency could survive.​ But it did. Greece was bailed out three times to the tune of €310 billion, more than 150 per cent of its GDP. Mario Draghi, the head of the European Central Bank, declared that it was ready to spend unlimited amounts of money to save the euro — “whatever it takes”, in the words of his famous 2012 speech in London. “The euro is like a bumblebee,” he said that day. “This is a mystery of nature, because it shouldn’t fly, but it does.”

Much the same could be said of the EU as a whole. The eurozone crisis was in some ways the template for the bloc’s semi-permanent state of emergency over the following years. A coalition of fundamentally very different nation states had bound themselves into a rigid supranational architecture without unduly troubling themselves over their mutual contradictions.
Under any serious strain, these internal stresses and fractures suddenly seem too much to bear and the whole structure wobbles over its awkward foundations. Sometimes it weathers the turbulence. Sometimes it doesn’t.

In 2015 the gently strengthening current of migrants flowing across the Mediterranean and the Balkans into Europe mounted abruptly into an irresistible flood. Driven by the civil war in Syria and the economic and political turmoil across north Africa and the greater Middle East, at least 1.8 million displaced people arrived in the EU over the space of 12 months.​ ​They died in their hundreds, drowning in the sea and freezing or suffocating in lorries. The Dublin regulation, which stipulated that asylum seekers were to be processed in the first member state where they set foot, soon proved inadequate to the challenge. The EU’s leaders tried repeatedly and fruitlessly to establish quotas for the equitable distribution of the migrants. The edifice of rules twisted under the pressure and buckled. Hungary pulled out of the Dublin system, effectively killing it in a single blow. Nothing was erected in its stead.

At the same time, Europe faced an equally momentous test from the other end of the continent. Britain was seeking what David Cameron described as a “new settlement”, including an “emergency break” on welfare for new arrivals from the EU, an end to child benefits payments heading overseas, and an explicit opt-out for the UK from the bloc’s aspiration to “ever closer union among the peoples of Europe”.​ ​Mr Cameron got much of what he asked for. But it was not enough. On June 23, 2016, Britain became the first member state to vote to leave the EU. Grexit had been transmogrified into Brexit. The tortuous negotiations that followed were shaped by a rare resolve and unity on the European side. The EU stuck to its rules — no special status, no fuzzy external borders, no trade talks before the withdrawal agreement was concluded— and Britain ultimately complied.​ ​From a purely technical standpoint, this strategy was a triumph. For the time being, support for staying in the EU is close to record levels in most of the remaining 27 countries. Yet Brexit has hardly prompted a blossoming springtime of concord and solidarity across the bloc.

As nationalist and populist movements have waxed in strength, the motto of ever closer union has seemed increasingly like an ironical joke. Poland and Hungary have cheerfully defied what is in theory the gravest disciplinary tool available to Brussels — the Article 7 proceedings — following their attempts to subjugate their respective judiciaries.

A creeping tangle of affiliations to Russia and China, including Germany’s Nord Stream 2 gas pipeline and the encroachment of Huawei, a Chinese telecoms giant, on Europe’s 5G mobile networks, has led the EU’s collective foreign policy to resemble one of Mr Van Rompuy’s haikus: “A fly whisks and hums, dipping and diving around a room. It hurts no one.”

This has been a decade characterised by two interlinked paradoxes. The first is that, with the notable exception of Britain, Europeans’ enthusiasm for the idea of Europe is undimmed, and yet their commitment to the things that would make the EU more than a merry-go-round of money and pretty sentiments is strictly limited.

The second is that the majority of the union’s member states are as united by their desire to turn it into a significant geopolitical player as they are individually unwilling to make the sacrifices that this would entail. Both paradoxes will be inescapable as the 27 nations prepare to wrangle over the next budget and the ambitious programme of climate reforms drawn up by the Commission under its new president, Ursula von der Leyen.

Europe has survived one of the most testing decades in its postwar history. As the Nobel committee recognised, in the grand scheme of things it has succeeded in its most fundamental objective, transforming disputes that might otherwise have found their expression in bombs and bullets into arcane altercations over wildflowers and deposit insurance.​ ​But it has also begun to stall. The trajectory of European integration is sometimes described in terms of a bicycle that is destined to keel over unless it can pedal forever onwards. As the founding member states find themselves increasingly at odds with their newer neighbours, though, the danger is now that one wheel could very well turn out to be spinning much faster than the other. A two-speed Europe with diverging sets of rules may in the end be the only way out of this dilemma.

“Our continent,” Mr Van Rompuy said on that day in 2012, “risen from the ashes after 1945 and united in 1989, has a great capacity to reinvent itself.” He was quite right. But the next reinvention may not be wholly to his taste.​
Posted by Colin Davies at 8:28 am

You may wish to rethink your application for Irish citizenship. If they implement this stupidity https://wattsupwiththat.com/2019/12/31/ireland-fast-tracks-law-effectively-banning-gas-vehicles-within-a-decade-is-the-us-next/ they won't have the money to care for their aging citizens either at home or abroad & you will also lose your entitlement to treatment in the UK as well as your old age pension. In my "boiling frogs" experience, the frying pan is the least worse option. Better that than the fire.

I like this short, pithy & precise statement. 'Catastrophic Global Warming is all about mischaracterizing a natural phenomena'. Warm cycles, cold cycles.

I don't have to give up my British passport.

Britain and the Republic of Ireland have always had special arrangements for citizens of both countries regarding pensions etc.