Spanish life is not always likeable but it is compellingly loveable.
Christopher Howse: A Pilgrim in Spain* 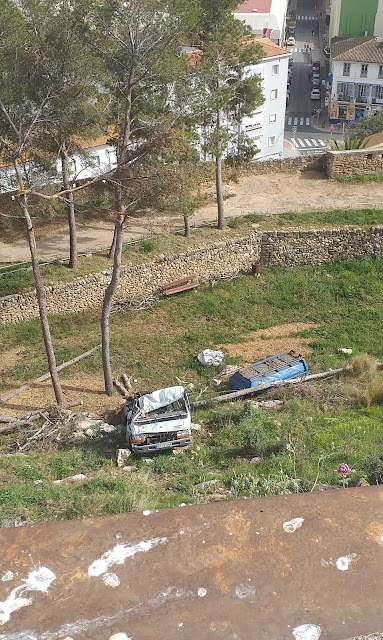 The Bourbons, a saga full of vicious and moronic rulers. Go for it, Valtonyc

Valtonyc, the Sa Pobla rapper, has to enter prison, after the Supreme Court ratified his sentence of 3 years and 6 months for insulting the crown, for disrespecting the Bourbons. For this reason and in view of the sentence, it seems to me it would be worth remembering who the Bourbons are and what they have represented for Spain.

The Spanish Bourbons have the honour of topping the list of the most moronic and despotic of European royal strains. And they have won this place in history on overwhelming merit, and - come on - they have put in a lot of effort and desire.

Let's start with the first king, Felipe V, who walked in his wife's nightgown in the royal palace, didn't wash and defecated everywhere, thinking he was a frog. He didn't let anyone cut his hair, or her fingernails or toenails, until in the end he couldn't even walk. Ah! And he had a sick obsession with sex, a characteristic feature that has endured in the family to this day. This is the first Bourbon of the Spanish dynasty, Who inaugurated the successful royal line.

It seems difficult to believe, but those who came later knew how to live up at these heights. His son, Fernando VI, had the habit of biting and hitting his subordinates, to the point of causing significant injuries. He danced in his underwear and only calmed down after a good dose of opiates.

The next king, Carlos III, was a melancholic character, somewhat strange. He married at  22 Amalia de Saxony who was 13. He was so excited about the joys of marital life with his wife, a girl to all intents and purposes, that he related in a letter to his parents the carnal relationships he had, which all children usually do, of course. Carlos III has the reputation of being the only moderately presentable Bourbon, because he knew how to delegate to competent ministers. But beware! He delegated because he was never at court, spending the day hunting. In fact, was being spent at court an average of six or seven weeks a year; the rest was spent in the field. Carlos III is known as "The Hunter" and a portrait of Goya shows the king - very content - shotgun in hand.

Goya also painted the royal family of Carlos IV: a ruthless portrait where all the defects and vices of the whole group are reflected. Noone is saved. Carlos IV spent the day hunting like his father, he liked to carpentry and was a manipulable character, influenced by his wife, Maria Luisa de Parma, who placed her lover, Godoy, in the position of 'universal minister'. Carlos IV ceded the rights of the Spanish crown to Napoleon for a modest sum: 30 million reals annually, the price of his patriotism. His son Fernando also obtained a pension, admittedly lower at 4 million reais.

Then came Ferdinand VII, "The Desired", a vicious and lubricous scoundrel, with a disproportionately large member, as a doctor of the time noted in his diaries: "A fine member, like as a a bar of sealing wax at the base, and as fat as the fist at the top, and as long as a pool cue. " Fernando VII has the honour of being considered the worst king in the history of Spain; a title, everything must be said, for which hie relatives competed well. He had no male offspring, proclaimed the Pragmatic Sanction that annulled the Salic Law and allowed his daughter Isabel to govern instead of his brother Carlos, who would have been the natural successor to the throne. This action would trigger a dynastic conflict that would cause three wars and thousands of deaths during the nineteenth century: the Carlist Wars.

What to say about Isabel II, "the Isabelota"? She inherited his father's sexual appetite, was spoiled and influential, and in court she surrounded himself with grotesque characters, such as Sister Patrocinio, the 'nun of the wounds'. Meanwhile, her mother María Cristina gathered a great fortune thanks to her political influence and her participation in the railroad business in the peninsula. Via commissions.

The Glorious Revolution was the first attempt to cast out the dynasty once and for all, but without success. The death of Prim, the abdication of Amadeo de Savoie and the conflicts within the First Republic, allowed the restoration of the monarchy in the person of Queen Isabel's son and Valencian commander of engineers, Enrique Puigmoltó. Alfonso XII, the "sad about himself", was a sickly and melancholic young man who, unlike his predecessors, received a more complete training in different European countries, which did not prevent him from committing a stupid slip that led to significant diplomatic problems with France. Alfonso XII died of tuberculosis and his wife, Queen Maria Cristina, acted as regent until the age of Alfonso XIII.

The new king stood out for his arrogant bearing and his swaggering, for his unwillingness to submit to constitutional restrictions, for his disastrous government work, for military disasters, for the dictatorship of Primo de Rivera and . . .  Ah! On a  a positive note: for being a film promoter, thanks to the pornographic films made by the Baños brothers and he financed from his own pocket. These are now in the Filmoteca of Valencia.

His son Juan, father of the current king emeritus, after the fascist coup d'etat, hurried to make himself available to Franco, although General Mola prevented him from joining his forces, so as to avoidproblems with the Carlists. The Count of Barcelona worked to achieve a return to monarchy and sent his son Juan Carlos to Spain to study with the rebels. What better education can be given to a child? Despite the ouvertures of the Count of Barcelona ​​to the moderate opposition, the real interest of the family was not the restoration of democracy but the restitution of his family dynasty, by whatever means.

King Juan Carlos always had consideration for the dictator; in fact he did not allow anyone to speak ill of Franco in his presence. Juan Carlos consciously or unconsciously led to the coup d'etat of 23-F, speaking as a bigmouth with his generals about the political situation in Spain and the changes that would be necessary. The changes came through the removal of Adolfo Suárez, but the coup was already underway. King Juan Carlos, like many of his predecessors, tried to grease his wallet to accumulate a fortune that The New York Times estimated at 2.3 billion dollars, all in black money, because it is not known if he has declared anything to the Treasury of his extraordinary income. Juan Carlos, like his ancestors, relentlessly practiced two of the hobbies for which the Bourbons have always distinguished: hunting and fornicating. From Juan Carlos's royal fornication have arisen extraordinary expenses paid from reserved funds which were used to hide some of the many affairs he had during his reign.

After enduring stoically for 300 years the government of such a peculiar dynasty, it seems that the time has not yet come to speak, to express freely what it has meant for the suffering citizens of this peninsula, having been ruled by the caprice of such an extraordinary Bourbon DNA. And we still have to put up with the closing down via the jailing  of anyone who dares to tweet, talk, sing or rap about it. As in the case of a brave young man of 23, from Sa Pobla.

Galicia Living is a new property development outfit here in Southern Galicia (As Rías Baixas), owned by a friend of mine. So, if you're looking for a house here, get in touch with them. And, if you're particularly interested in the lovely Miño area down on the border with Portugal, let me know on doncolin@gmail.com and I'll send you my write-up on it.
Posted by Colin Davies at 10:22 am

Those pizza vending machines might be of interest to night hawks.

And here we go. Schools closed in Galicia for two weeks.

My neighbour has just told me she's collecting some books tonight from Correos in a mask and gloves. Putting aside how useful these are, I had to restrain myself from saying there was no panic when she agreed to do this a week ago . . .

Jaque al Rey is a chess term - King in check.
Thanks for the Bourbon trans, loved it!

i knew that and wrote 'check' first and then confused myself and changed it to 'cheque' . . . .

Have changed it. Ta.