Spanish life is not always likeable but it is compellingly loveable.
- Christopher Howse: 'A Pilgrim in Spain'
Life in Spain in the Time of Something Like Cholera

Observations after my first sortie into the city for 3 months:-
o O Burgo bridge is still only half open.
o There were lots of people exercising on the streets younger than the time slot (10-12) allows for this.
o Some cafés were open, though only those outside hotels or small enough to be family concerns.
o There were 'young' people on the terrace of one hotel but the waiter advised that, though they couldn't go out to walk and run at outside their time slots (franjas), they are allowed to go to a café. He might be right. But are they allowed to go to the shops at times reserved for 'seniors'?
o No large cafés - those who've laid off their staff - were open, even those with decent-sized terraces outside.
o No bars or restaurants were open, though it was early in the day for this.
o The Post Office was open but there were 15 people queuing in the street. Gave it a miss.
o Not a single officer the law was visible in 2 hours.* Which is possibly why . .
o The beggars who sit all day on shop doorsteps were doing their usual thing.

* Correction: This chap and his sidekick appeared on the hotel terrace 5 minutes before the end of the 10-12 time franja, possibly to check whether any seniores were about to breach the law: 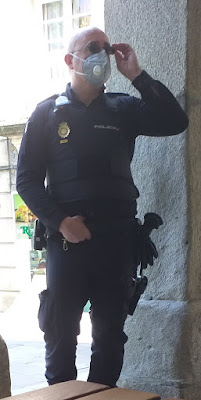 Essentially the Great Relaxation is largely a chimera so far. Nothing like normal economic activity has been resumed. It's a great time to wander round Pontevedra's gem of an old quarter. Like on public holidays.

Real Life in Spain
The USA