Spanish life is not always likeable but it is compellingly loveable.
- Christopher Howse: 'A Pilgrim in Spain'* 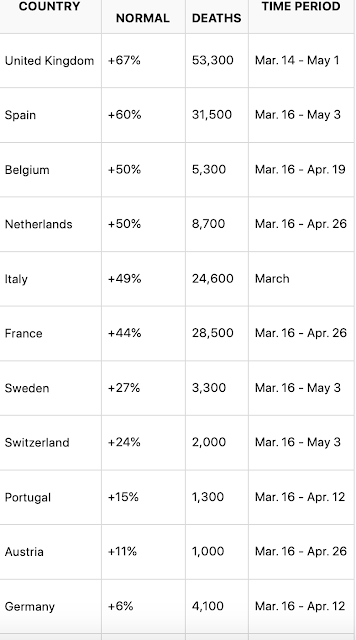 Also interesting, of course, is the number for our neighbour, Portugal.

Life in Spain in the Time of Something Like Cholera
Citizen: Can I bike to where I want to walk for exercise?
Cop: Yes, because the bike is a form of transport in this case.
Citizen: But I can't bike to the same place and back home outside the permitted exercise hours?
Cop: No, because that classifies as 'exercise', not as moving to a place from which you are merely allowed to walk.
Citizen: OK, but I can walk as far as I like to anywhere to meet friends for a coffee art any time of the day?
Cop: Yes. 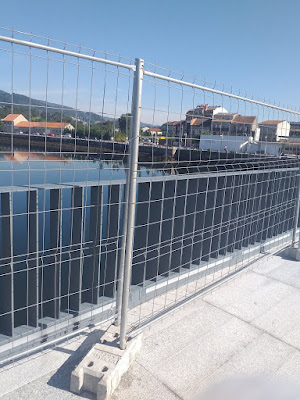 Real Life in Spain
The Way of the world
The USA
Finally . . .
THE ARTICLES

1. Women are the stronger sex in this crisis: Whether on the front line or in the corridors of power, men are being shown to be second best: Trevor Phillips, The Times

A father and his son are in a car accident. The father dies at the scene and the son is rushed to hospital, where the surgeon looks at the boy and says: “I can’t operate on this boy, he is my son.” How can this be? The answer is that the surgeon is his mother.

The surgeon’s dilemma, as this riddle is known, is the stuff of every unconscious bias training course. If you didn’t get it, you probably grew up in a world where the conventional image of the surgeon is male. If you are a younger person, you might point out that the answer itself carries a whiff of a different prejudice: these days, the boy may have two fathers.

But the coronavirus threatens to make even this lesson in political correctness obsolete. The media speaks of the war against the virus. Yet the greatest certainty about most wars is that the typical combatant is a man, whether he be WE Johns’s debonair airman Biggles, the mildly psychotic war veteran John Rambo, or one of the morally ambiguous CIA and SAS operatives in the Call of Duty video games.

Of course, women have always lost their lives in conflict, and not always as victims. Many, for example, died serving in nursing or intelligence roles over the centuries. Yet in popular culture the woman warrior remains an aberration. It is less than five years since women were allowed on to the front line as infantry or tank crew. Astonishingly, this Christmas will be the first in which a child’s stocking might include a female toy soldier after an indignant letter from six-year-old Vivian Lord of Arkansas prodded toy makers to keep up with the times.

Yet in this most peculiar of conflicts there is no doubt that the “weaker” sex carries a Y-chromosome. Worldwide, men are twice as likely to die having contracted the virus. If it becomes endemic the male of the species will need to be protected in much the same way the elderly are shielded against seasonal flu. As for being on the front line, there is little question about who is more exposed to enemy fire — 77 per cent of NHS staff are female. Among those working in social care, the death rate is running at 23.4 per 100,000 among men compared and 9.6 among women.

But perhaps the greatest change will be wrought in our perception of the wartime leader. When we look back on this period we will probably note that the most decisive and effective leaders were Germany’s Angela Merkel and New Zealand’s Jacinda Ardern. One is a 60-something conservative and chemist; the other a youthful socialist spin doctor, but both are having a good war. Two weeks ago New Zealand became one of the first nations to report a day without new deaths. Germany reports a death toll one-third of that in its less populous neighbour France and there is speculation about whether Mrs Merkel may be persuaded not to step down at the end of this year.

In northern Europe, Denmark, Norway and Finland all have mortality rates below 10 per 100,000 population. All are led by women. By contrast, Sweden’s male prime minister contends with figures of 34.7 per 100,000.

In Britain, in the 60 or so days since the daily No 10 briefings began, I can recall the central podium being occupied by a woman only once. The government doesn’t seem to trust any of its female members enough to let them join the so-called “quad” making the big decisions, and evidently it doesn’t even think that the girls can be trusted to sell tricky decisions. Last week’s back-to-work message might have been more credible coming from someone who sounded as though she understood what it might mean for the average family, torn between wanting to start earning full time, but conscious that the necessary return to school wouldn’t be entirely risk-free.

It would be fatuous to propose that the mere election of a female leader is prophylactic against Covid-19. But it might be worth asking if nations more willing to be led by women are in some way better prepared for this particular war. Maybe it is purely accidental that the past four governments in Norway have been headed by a woman, Erna Solberg; that two of Denmark’s last three prime ministers were female, or that Finland’s previous president, Tarja Halonen, served for the maximum 12 years until 2012.

Taiwan’s first female president, Tsai Ing-wen, can count the number of Taiwanese deaths — seven — on her fingers despite the fact that her island’s border lies less than 100 miles from the People’s Republic, and more than a million of her citizens work there. And while China and India have almost identical populations, about 1.3 billion, China counts many more deaths than India, whose politics were dominated until recently by two women called Gandhi — first Indira, then her daughter-in-law, Sonia. The People’s Republic has never had a female leader.

This may all sound rather fanciful. But even the most sceptical might be given pause for thought by the grisly top ten compiled by Johns Hopkins University. The countries with the highest death counts so far are the US, the UK, Italy, Spain, France, Brazil, Belgium, Germany, Iran, and Canada. Of these, seven have never elected a woman leader. Between them the other three have had only four women leaders in their history. The standout was Margaret Thatcher, who, according to her biographer Charles Moore, “had quite a low view of the male sex. Men are lazy and vain, she thought, and I shall get the better of them.” Perhaps her female successors around the world are proving her point.


ME: For The First Blast of the Trumpet Against the Monstruous Regiment of Women, click here.

2. Donald Trump doesn’t care who you are, he cares only that you like him. That’s why he’s in power: Camilla Long, TheTimes

Who are Donald Trump’s real friends? When I met the dandruffy peach Cthulhu in Trump Tower some years ago, it seemed as though he didn’t have any. The only person he truly adored was his devoted executive-assistant-cum-nanny, Norma Foerderer, a terrifying rasp-voiced iron-haired New Joisey battleaxe whose job it was to stop people touching him or coming too close.

By that stage, Trump was so frightened of people spitting on him or covering him with germs he’d wash his hands “as many times as possible” a day. In a 1993 interview with another committed germophobe, the radio host Howard Stern, he admitted a grave “psychological problem” with cleanliness. Handshaking was “one of the curses of American society”, he “wrote” in The Art of the Deal. “The more successful and famous one becomes, the worse this terrible custom seems to get.”

It’s not that he hated his fans, or, as we now call them, his voters — it’s that he didn’t like anyone to come anywhere near him. If you want to know why he’s dodged the virus, it’s because a man has always followed him with hand sanitiser at all times. For Trump, the only thing that matters is winning, not making nice or shaking hands. He is a true politician in the sense that he measures success only in terms of sheer quantity, or, as he puts it, “ratings”.

For someone like Stern, also a libertarian, the picture is a bit different. Last Tuesday, the sheep-haired Patti Smith lookalike used his show to claim that Trump was in fact “disgusted” by his voters: “He wouldn’t even let them in a f****** hotel,” he spat. “Go to Mar-a-Lago, see if there’s any people who look like you. I’m talking to you in the audience.” He didn’t “hate” Trump, but did hate his audience “for voting for him”. You had to wonder: who was more disgusted by Stern’s Trump-voting audience, Donald Trump, or Howard Stern?

There are two types of political figures in this world: ones who care who their voters are and ones, like Trump, who really don’t. Trump may be pathetic and hypersensitive and obsessed with people liking him, but when it comes to it he doesn’t really give a damn who they are. By contrast, there are people like Hillary Clinton, or the politicians in our Labour Party, for whom worrying about the moral quality of their base has been a catastrophic preoccupation.

Labour politicians have been making this mistake for more than 20 years now — last month, for example, was the 10th anniversary of the beginning of the end of civilised politics, the moment Gordon Brown called Labour voter Gillian Duffy “that bigoted woman”. Skilled politicians try to win the minds of everyone, but others are arrogant and blinkered enough to think they can pick and choose their supporters. Clinton lost an entire election because she thought she could denounce people who voted for Trump as “deplorables”. It is this sort of ideological snobbery that is now crippling the Democratic Party.

It is on display again in a hypnotic new documentary about Michelle Obama. It’s clear from the start of Becoming whom Obama likes and whom she doesn’t, and that the list of people she doesn’t is vast. She doesn’t like the stuffy White House or people who don’t strive, like she did, to get into Princeton. There’s no room for people who don’t hug it out or sign up to her exact view of life. The only white voter she tolerates is a meek Chicago woman who’s wheeled out to repent for the “veiled” historical racism of her family before she is wheeled off again. The only acceptable white celebrity seems to be a grovelling Reese Witherspoon.

Obama is angry with the people in the black community who didn’t vote in 2016: that was “a slap in the face”. She was also disappointed by the black people who didn’t help Obama to get the Congress he needed. “That’s my trauma,” she sighs. But why do people normally vote — because of policies, or because of some soaring emotional ideological woo-woo that is now strangling the party? The left thinks the poor and minorities ought to vote for them out of loyalty, but you can’t curate your voters; Trump, in his bovine and appalling way, understands that.

When faced with people who have turned up at her book signings, Obama is flanked by teams of clipboard Nazis who step in to shield her from the hysterical Gen X non-binary drips who throw themselves at her or want to tell their mawkish “stories”. You think: does she really like these crazed supporters? The difference between her and Trump is that to Trump it wouldn’t matter.