Denmark: In the news for once.

Spain, says this author, has had a bad summer and facers a worse autumn/fall. Economically speaking, that is.

'Orrible Orcas along the  Spanish coast. Which appear to be both whales and dolphins, it says here.

Which reminds me  . . . (Real?) whales have been sighted along our Galician coast recently. Probably because the water is now quite a lot warmer than when I last entered it 21 years ago and feared for my manhood.

María has changed the title of her blog again. Here's Day 1 of Falling Back.

Just a reminder of how unscrupulous you can be there with impunity  . . . Bakker, of course, has served a prison sentence for an earlier fraud perpetrated on the credulous faithful.

The divine Bette Midler on Fart:- 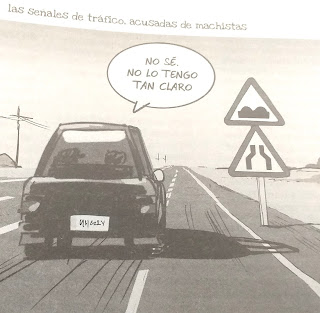 I cited the word baliza yesterday, one of the meanings of which is 'beacon'. Later, I recalled the belisha beacon that warns of zebra crossings in the UK and wondered if the surname Belisha was related to baliza. But could find nothing to evidence this possibility. But, anyway, it's a nice coincidence that one type of beacon in the UK has a name similar to the Spanish baliza. IMHO.

From Richard Ford's The Spaniards and Their Country of 1852 comes this phrase: Una mujer de mucha campanilla: ‘A woman of many bells’. Meaning, he says, a woman of 'much show, much noise or pretension'. The origin is the 'gay decoration’ of the heads of 'sumpter' mules.  I wonder if it's still used, perhaps down in Andalucia. The only reference I can find is this, page 130.

Incidentally, there's a fine mini essay on Ford here, by Roy Lotz. Scroll down a bit for it. As he says: Ford’s works must be one among the best travel books ever written.

P. S. I haven't been able to determine how this book - The Spaniards and Their Country - relates to Ford's earlier works  - A Hand-book for Travellers in Spain and Gatherings from Spain . But I suspect there's considerable, or even total, overlap.

'Sumpter': A pack animal, such as a horse or mule. Middle English: Driver of a packhorse from Old French sometier from Vulgar Latin saumatārius from Late Latin sagma sagmat- packsaddle, from Greek from sattein to pack. So, now you know.

I confess I wasn't aware of this:  The king of Morocco and the Junta de Andalucía came together 1998 to create a religious forum based on the principles of peace, tolerance and dialog. There are few organizations in the world that represent the three Mediterranean cultures of Islam, Catholicism and Judaism. Their aim is to find common ground for stability between these religions and they pursue it with dedication and openness. The Foundation has been endorsed by the Peres Centre for Peace, the Palestinian National Authority and other individuals and institutions in Israel, committed to promote understanding resolve conflict. They also have the support of the European Union, but clearly, this is an enormous task given present day tensions.  Their base is in Sevilla amidst the now disused Expo ‘92 exhibition buildings on La Isla de La Cartuja.  At first sight, it looks as though it is put together haphazardly, as though the Lego that it was built from was a mix of two different building sets. But it is what is inside that is important. The building itself is designed to recreate the Islamic influence evident all over Spain, but to modern standards.  By comparison, the Alhambra and The Mesquita in Cordoba are undeniably impressive, but dulled by 700 years of use, the paint and carvings bearing the patina of smoky candles and oil lamps. The colours here are bright, clear and vibrant.

This info - as did yesterday's - comes from a chap (Marinero) who's doing a fine job here of providing potted histories of earlier times in Spain.  As well as this more modern addendum. This is his admirable main web page.

A dispositivo rastreador or tracking device was used in the post about the husband & errant wife. Strangely, Baliza in Portuguese means goal, whilst as far as Google is concerned, Golatzio means goal in Galician & Portuguese.

This video should lift your mood: https://www.youtube.com/watch?v=7EugUKivN3M,

Nice video. Took name back to Iran. Thanks.