Night’s candles are burnt out, and jocund day stands tiptoe on the misty mountain tops

Spanish life is not always likeable but it is compellingly loveable

Spain: Two critical articles - here and here - on the performance of the government. A taster from the first one: While the reasons behind this poor outcome are still to be fully understood, Spain's COVID-19 crisis has magnified weaknesses in some parts of the health system and revealed complexities in the politics that shape the country. How very true.

1. The Spanish government is moving to outlaw the wage gap between men and women, making mandatory for companies to disclose the salaries of their employees or face fines. Click here.

2. Teens will be taught about the Civil War, Franco's dictatorship and the Transition to democracy involving the signing of the Spanish Constitution as part of a new 'Law of Democratic Memory' passed by the national government. At present, the Second Republic, Civil War and Francoist régime are included in History for ESO (Spain's equivalent of GCSEs) and Bachillerato (A-Levels), although the latter would only be taken if the student follows the 'arts route' rather than the 'science route' through 6th form.

But bad news, perhaps, for Brits . . . on British banks and their possible closure of accounts of folks resident in the EU.

Years ago, the president of Pontevedra's English Speaking Society told me that the place to have great octopus - which, incidentally, I don't much like - was not along the coast but up in the hills, in a place called Carballiño. There, he said, they obeyed the 11 strict rules of preparing octopus Galician style. One of these was the use of a copper pot. And, indeed, I've seen many large examples of these outside local bars and restaurants over the years. 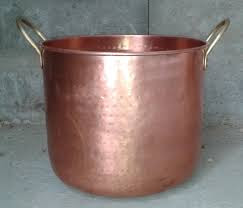 But, yesterday, I was told that copper is now forbidden and the pots (ollas) are made of stainless steel. I'll have to walk past one of the city's pulperías to day to check this out.

This is an article with which I have total sympathy, knowing of a case that, fortunately, happened 25 years ago. And which was easily resolved with the help of a ('traditional'?) psychiatrist. God knows what would happen now.

Back in 2013, Christmas Island had a ad directed at birdwatchers, with the line: Some gorgeous shots here of some juvenile boobies. Facebook's computer banned the ad and the company refused to reverse its decision, even after the background was explained to it. Arrogant or what?

This is a video I watched about a week ago. Copper cooking pans should have an internal coating of pure tin.

I have 2 copper fondue sets from 40 years ago that require re-tinning. I fancy giving it a try.