- Christopher Howse: 'A Pilgrim in Spain'

The UK. Click here for an unofficial inquiry into the dreadful performance of the British government over the last 12 months. Best line: What comes through our findings time and again is a tendency for drift and delay. So, who would be responsible for that? And who's getting a 'free pass' because the vaccination program is going well?

Living in Spain and wanting to know when it’ll be your turn to be jabbed? This is for you. But it seems to be rather more informative on which group you're in and on which vaccine you'll get than on when you're likely to get it. Too many imponderables, I guess.

A nice couple of fotos:- 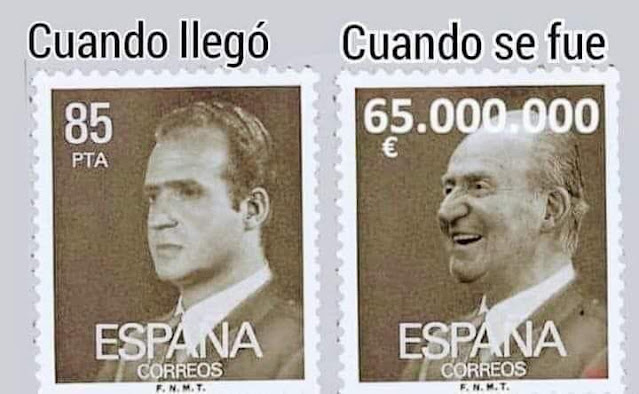 The ex king.When he arrived and how he is now. Sic transit gloria mundi . . .

There are one or two small bits of Pontevedra's old quarter where the houses are in decay. One of these retains a bar in which I suspect women would feel a little out of place. The houses around it have been gradually gentrified over the last 20 years, though not as rapidly as I forecast years ago. The latest one to undergo this process will be a restaurant with a pensión above it. Here's the place opposite it, yet to get the treatment:-

These are mariscadores - 'shell-fishers' - off a local beach. Given that they congregate both in the process and later in a café or bar, it's hardly surprising they've suffered from a high incidence of Covid:- 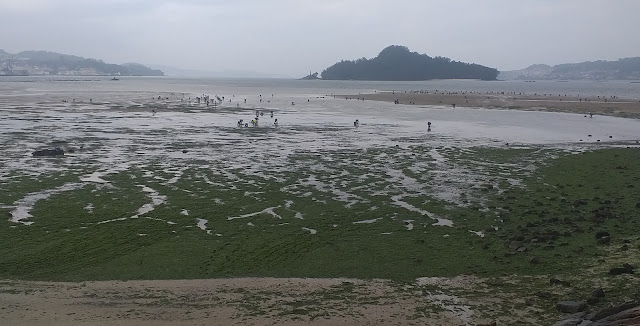 The green stuff is an algae that hits our beaches this time of the year.

Like, I think, many cars these days, my Honda Civic doesn't have a spare wheel hub and tyre. Instead, there's a can of foam and a gadget to take the valve out of the wheel so you can then squirt the foam into the tyre. This might well work if you have a little nail-hole but I can tell you it certainly doesn't if you tear even a small hole in the tyre wall on something unseen. And if  you have to drive on a flat tyre only a kilometre to the tyre shop, it'll be useless when you arrive. Even if it was only installed a month ago! So, now I'm wondering if I can get a spare wheel from one of the several scrapyards in the area and put it below the boot, where there's a space for it, hitherto empty.

Austria and Denmark have joined Slovakia, Poland, Hungary and Czech Republic in breaking away from Brussels' vaccines strategy, raising fears that the bloc's unity is crumbling in the face of the coronavirus pandemic. Austria will work with Israel and Denmark on second generation vaccines and 'no longer rely on the EU'. Understandably, this is widely seen as a rebuke to the European Commission-led joint procurement scheme.

Can anyone justify this? . . . The boss of the world’s largest private equity firm took home at least $610.5 million last year and his right-hand man received at least $216.1 million.

Cancelling Dr Seuss is absurd, the last thing we need is kids' books peddling tedious woke mantras. The cull of Dr Seuss’s output by his estate is symptomatic of the cowardice of the publishing industry in its pursuit of "diversity". The company says it made its decision after listening to “feedback from our audiences including teachers, academics and specialists.”  No feedback from children, then – the only “audience” that matters.

'Scrapyard' - Desguace. Writing above, I could recall the Spanish word but, ironically, not the English one.

The expression used to be 'bored with' but now seems to be 'bored of'. And no Academy can say this is wrong. Custom and practice is all. People power . . Even if they are actually wrong.

I read this question yesterday:- Do men seek power and influence for any other reason than to abuse it? It reminded me that for I've been wont to ask over the decades: What's the point of power, if you can't abuse it? Jokingly, of course.

I thought you might be curious about this:
https://www.theguardian.com/world/2021/mar/03/galician-noir-how-a-rainy-corner-of-spain-spawned-a-new-tv-genre.
Apparently crime dramas made in Galicia are all the rage. To my surprise even in the UK - so says the article. "Galician Noir" this is called. Seems galicians have found a novel way to make some money.

Yes, thanks for that. I saw it earlier today and will cite it tomorrow. I was surprised too but I haven't even got to Scandi Noir yet . . .

Shibboleth is a word that Ephraimites were unable to pronounce owing to a defect of aspiration, which discovered their country. King James Bible, Judges 12:6

"Then said they unto him, Say now Shibboleth: and he said Sibboleth: for he could not frame to pronounce it right. Then they took him, and slew him at the passages of Jordan: and there fell at that time of the Ephraimites forty and two thousand". "Bored of" demands the identical punishment. Only bloodshed can expiate the crime of grammatical insubordination by the Estuary English.