Some readers may recall the fotos of our new zebra crossing and associated signs of a month or three back. Well, as you can see, the signs come second only to pedestrians in the consideration they get from drivers . . . 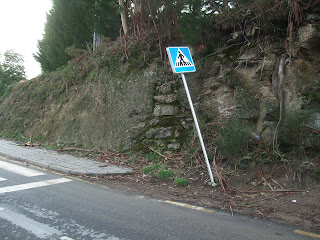 Not having a picture of an irate editor of a right-wing newspaper, I drew this myself. It’s rather pathetic but well within the Spanish tradition of cartoon capitalists. 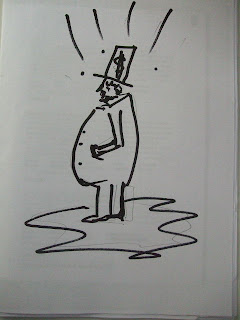 The stimulus was an editorial in El Mundo today complaining about having to contribute to the EU handout to arising from her government’s “mismanagement”.  As I predicted a while ago – because it was so easy to predict – the tune in is very different now the boot is on the other foot. And it seems that, while 25 years of management, mismanagement and downright corruption in the application of humongous amounts of EU dosh was never worth commenting on, Irish ‘mismanagement’ is in a very different category . And well worth moaning about. Even if the Irish were among the largest per capita contributors to the largesse received by . What ingratitude. Even if there’s no surprise about it.
And here’s another cartoon, this time a real one, taken from an article in Prospect magazine and showing the Bank of England being ravished by the British Prime Minister of 1797. 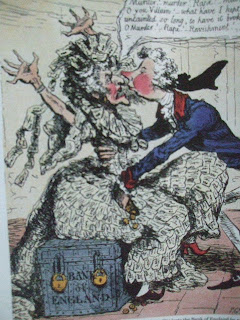 The article asks where all the 200 billion pounds has gone that the Bank of England has fire-hosed into the British economy. It seems that no one knows but that the probability is that – if it’s not lying useless in bank coffers – it’s circulating around the financial system, earning more of those contentious bonuses for bankers, venture capitalists and bond traders. Some of it might just have gone in credit to large companies but hardly any to small companies, who happen to do most of the borrowing. Usually. But why should we be surprised at capitalists doing what’s best for themselves? Left alone, that’s always what they’ll do. It’s (nearly) enough to make one a socialist.
Finally, my student was neither early nor late today. You can guess the rest. Still, her mother had a plausible excuse and two out of four isn’t bad in a Spanish context. Is it any wonder we all get a tad sceptical about ’s ability, against tough competition, to export her way out of her crisis? Anyway, the good news is that the mother told me she has a friend who owns a restaurant in town, makes great cakes and would like to meet me. Sounds like a set-up to me but, hey, I might get to enjoy a good tart or two.
Posted by Colin Davies at 6:16 pm

Colin,
I am just wondering, what will be your tune in a few months time when Britain is in the same position as Ireland is now? Will you also complain about the (sp) press pointing out to "mismanagement"?

Obviuosly, in a few months time your prediction that Spain will be back to pesetas could already have become a reality. Our friends in 'the markets" are already poised to give the final death- knell, lashed on vigorously by our friends in the Murdoch press.

Who said "the markets" are not rational?

Firstly my comment was not a complaint but an observation. El Mundo’s attitudes don’t affect me one jot. No reason for me to complain about them. I just find them ironic. But, then, I find most things ironic. Not to say quite mad.

More importantly, as an EU enthusiast and (super?)optimist, I would have thought you’d have bigger things to worry about right now than how I will react to the UK getting an EU bailout. If it happens, it happens. The UK survived 1976 and I imagine it would survive this. Especially with a floating currency that can be (semi)managed.

Do you know of others who share your view it will need to go cap in hand to the IMF/EU again?

Meanwhile, are you laying odds on the various scenarios for the EU, the euro and individual Eurozone members?

Or are you still 100% sure a strengthened EU will ultimately emerge, based on the German model and run effectively by Germany. With various controls and penalties being imposed on several recalcitrant members, including the UK? Will it last for a thousand years . . . . .?

If so, do you still see this as politically feasible in the mid term? Coz I don't.

Portugal next, I guess.

And then Spain? Or are you betting the wolves will go for the UK before Spain?

Me, all I'm concerned with is my Spanish asset base. But I won't care if it only falls in value expressed in pounds. I have a daughter in each country so it would be easier for inheritance decisions to have the pound and Spanish euro (Spuro?) back to what they were . . . .

I'm a simple man really. Who worries more about his kids than himself.

Colin,
The Germans are all a bunch of nazis, the spanish unrealiable dagos,.....it is an old tune.
The best bet is to preserve the Euro...for your daughters' sake, I mean. Colin, if I were convinced that British style of economic management was the way to go, I'd endorse it all the way. But I am not. At all.