Telefonica: Visit no. 4.
Hola, Ana.
Hola. We have a problem.
What, for God's sake?
Everything I told you was wrong.
Sorry?
Well, the coverage in your street is very poor. Only 1 mega.
I told you this last week, when you insisted it was “Up to 6 megas”. So that's not a surprise. Is that all?
No, but because it's so low you don't get 2 of the 3 elements of Telefónica's package. The ones about free text messages and free calls to mobiles.
OK, so the price is lower, yes?
No, it's the same.
Are you telling me that I pay the same price as people getting 10 megas when I get only 1 mega, at best, and on top of that I don't get the package elements you've just described because the coverage is so poor?
Yes.
This is ridiculous. And completely illogical. It's a double whammy – poor speed and inferior package elements. Can you give me any sort of explanation?
[Wan smile] We're in Spain.
OK, I'll think about it.
OK. Here's my number. Call me if you want to proceed. If you call Saturday, we'll have the kit on Monday.
You mean that, if I'd wanted to go ahead this evening, you wouldn't have been able to give me the kit now, even though this is what we agreed this morning?
[Another wan smile] Well, no.
I'll call you . . . . [As if]

Naturally, I went straight from this to the offices of another provider – R – but, as there were 6 to 8 people waiting to be served by the single assistant, I came out and went for a glass of wine.

My houseguest, Ian, and I are getting really fed up with the accordionists who seem to have colonised Pontevedra. There were actually seven of them in the city's main square last night, though we got the impression this gathering of the clans was unplanned. Anyway, I've decided on a complete payment strike as regards wandering minstrels and will only reward the true musicians who stand and play in the pitches near the Chapel of the Wandering Virgin. Which is a tad ironic, I guess.

I've been trying to snap a particular piece of graffiti in the city centre and here it is. It's a graphic statement of the famous Spanish Individualismo and, appropriately enough, the guy in the picture declined to move away despite the fact he knew I was taking a foto. 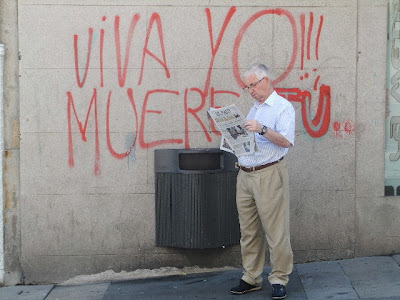 Though he did make a concession and move to the other side of the bin. 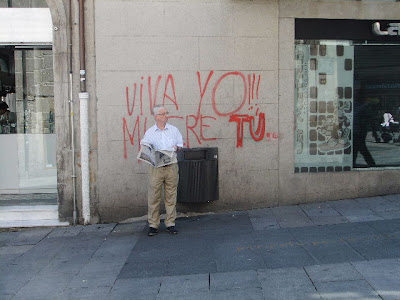 New Spanish words: 1. Un rodriguez - The husband who stays back in the city in August working while his family go away on holiday. 2. Un lettering – A tattoo of words or phrases.

Finally . . . I bought two combs today. Naturally, they were sheathed in hard plastic, needing the kitchen scissors to release them. They look pretty ordinary to me but, whenever I use them in the future, I'll be thrilled to know they were Designed in Paris.
at August 04, 2012

Both the wording and the absence of inverted exclamation marks make me suspect that the graffiti was actually sprayed on by a foreigner, not a Spaniard.
So I wonder if this is really hard proof of Spanish 'Individualismo'.

We´ve just changed from Telefonica to BT Spain, so far, so very good, changeover was painless.

@Anon. Thanks. Not sure we get BT up here but will check it out.

The Spanish use the expression "Estar de rodriguez" to mean home alone without your spouse. I didn't realize you could use the noun to mean a person who is in this situation regularly (specifically August holiday). Keep the vocab coming!