Why did it take so long? "Spain apologised on Monday for its part in the events that led to Bolivian President Evo Morales’ plane being delayed during an international search for US fugitive Edward Snowden." Face-saving?

And why doesn't President Rajoy resign? Well, see here for one explanation.

The guy who's in court accused of illegally paying senior members of the governing PP party - Sr Bárcenas - has begun to give the interrogating judge more details of the affair. We've now moved on from the question of how it was all done to the methods employed by the party to stop things coming to light. Bárcenas was, he claims, told that, if he kept mum, the Justice minister would be fired and his case would be shelved - presumably by a judge leant on by the party. But, if he continued to sing, his wife would go to jail. Plus, If he kept his gob shut, the party would also see their way to paying him 500,000 euros as a reward. Tawdry carrot-and-stick- stuff but, as the above-cited article says, not necessarily enough to bring down a Spanish government. Or even force an admission from the President.

Following the news that Pontevedra will soon have a new way of dealing with illegal parking - the multamovil - I decided to snap examples of this on my way into and out of town this morning. Let's say 30 minutes or so. The results:
Parked at a bus-stop - 5
Parked entirely on the pavement - 4
Parked half on the pavement and half on yellow line - 1
Parked on yellow lines - 31
Double parked in busy street - 2
What all of these drivers rely on is that the single tow truck (la grúa) is so busy the chances are it won't get round to them. Which is a reasonable bet. Plus, the vast majority of them obey the basic rule of illegal parking - don't park at the end of a line, where it's easiest for the grúa to pick you up. God knows why it's taken so long for the town to move to a more efficient (and high revenue) system but a more relevant question is - Once the multamovil ('mobile-fine') is operating, where are the hundreds of offenders going to park?

I did actually take fotos of all these cars but decided against boring you with all - or even some - of them. On the other hand, here's one of the café owls referred to in the recent article in the Diario de Pontevedra. 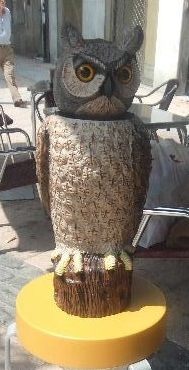 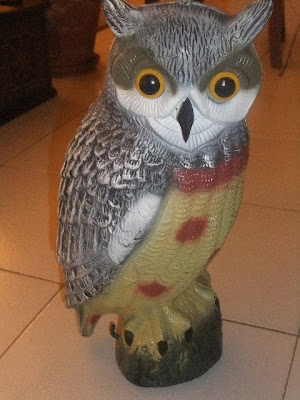 I'm sure you'll agree mine is the fiercer. Though not necessarily the more effective. I should, perhaps, have bought the one that swivels on its base.

My quest for a new TV continues. Having chosen the size and make and even identified a particular (2013) model, I set off today to find the 3 distributors cited on the web page of the manufacturers. Two of them had closed and the 3rd had never heard of the model and couldn't find it on their computer. So, now that I've tried to do my bit for local trade, it's back to the internet and amazon.es. Where the price is 200 euros lower, I find. Raising the question of why I didn't just go there in the first place.

Whenever I read an article in a British newspaper and then want to return to the main page, I'm taken back to where I was on the latter. So, how come this never happens with El País and El Mundo, where I'm always taken back to the headlines at the top of the page? I'm tempted to answer that this is yet another failure to see things from the eyes of the consumer.

Which reminds me . . . My visiting elder daughter bought 20 euros worth of stuff in a shop in Madrid last week and was, of course, asked not just to enter her pin number but also to provide ID. When she said she didn't have any and that the chip & pin system was supposed to obviate the need for it, the checkout girl went to talk to her manager, came back and said OK. So, there you are folks - Stand your ground if you've given your pin number. Though I guess this won't do any good when you're asked to give just an electronic signature and ID but no pin, even if the machine looks as if it's designed for the latter. But good luck!

Finally . . . . Con la boca pequeña: Literally, 'with a small mouth'. 'Through clenched teeth', I suppose, as 'It's used when someone says something without intending to carry it out or when someone says something he doesn't mean'. Like any Spanish politician making an apology, for example. Should that ever happen.
Posted by Colin Davies at 12:45 am

Colin, saw a good parking situation that you would have loved. A large delivery truck, parked across a corner, blocking two pedestrian crossings - do it in style!